The liberation and reunification of Jerusalem during the Six Day War allowed Israeli archaeologists to excavate in the area surrounding the Temple Mount. While some modest exploratory shafts had been dug by the British Palestine Exploration Fund (PEF) in the nineteenth century, these were the first scientific excavations of the area since the destruction of the Temple in 70 CE.

The initial excavations, begun by Benjamin Mazar and Meir Ben Dov in 1968, continued until 1978 and resumed in the 1990s under the direction of Ronny Reich with the assistance of Ayelet Mazar, granddaughter of Benjamin. The almost four-decade long project removed tons of debris and other material accumulated over the centuries. These excavations, coupled with primary sources (such as Josephus, the Letter of Aristeas, the Mishna, and other sources) are vital for understanding the Temple Mount because of the impossibility of excavating on the Mount itself. Many of the archaeological finds relate to the Second Temple period.

Street from the Second Temple Period

This street was fully uncovered in the mid-1990s and dates to the decades before the Romans destroyed Jerusalem in 70 CE. The street is 8.5 meters wide and bordered on both sides by raised curb-stones. Underground vaulted rooms, with walls founded on bedrock, support the the street, which was the main thoroughfare of Herodian Jerusalem. This is the actual street millions of Jewish pilgrims walked on at the end of the Second Temple period!  Originally rows of shops lined the roadside, and a few of these shop spaces were uncovered under the supporting pier of Robinson’s Arch. The street is paved with large, smooth, stone slabs 7–13 sq. meters in area and up to half a meter thick, and has been only partially cleared by excavators. It was covered with massive stones pushed down by the Romans after the destruction of the Temple compound in 70 CE. Two drains ran underneath the street: A small channel for sewage, and an advanced water drainage system (which is possible to visit today). Josephus writes that after the Temple was destroyed and the city burned, some Jews sought refuge in the city’s drainage system. There are also numerous ritual baths (mikvaot) where worshipers could purify themselves before entering the sacred enclosure. 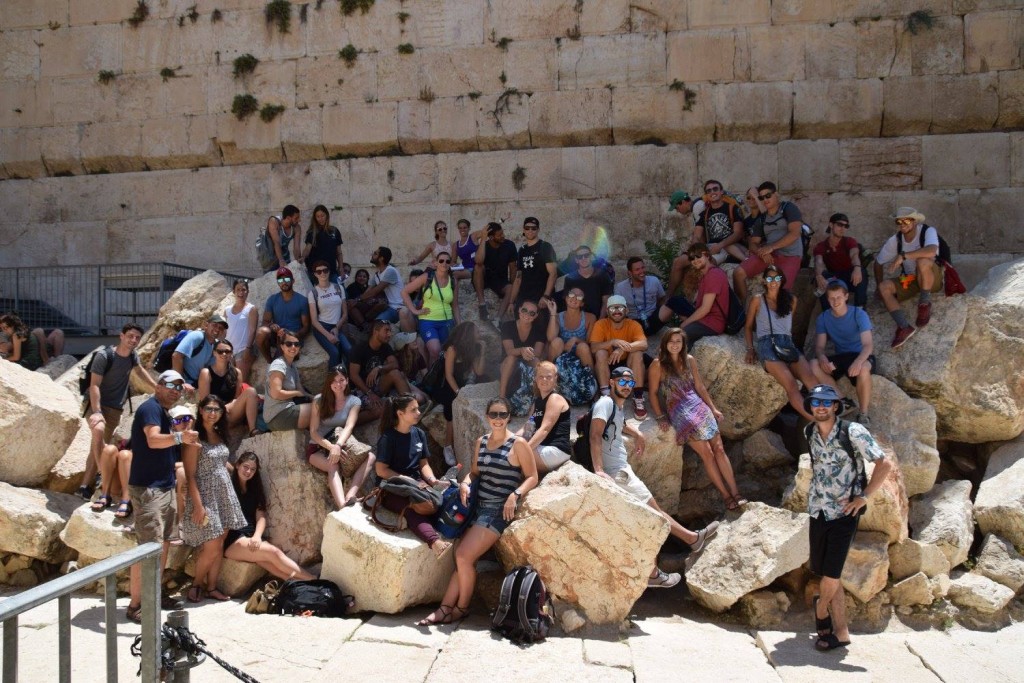 Tuvia with Birthright participants on the Second Temple Period street in front of the post-1967 excavated section of the Western Wall. Photo (c) T. Book, 2020

One of the priests stood of course and gave the signal with the trumpet at the beginning of every seventh day (Shabbat) in the evening twilight…giving notice to the people when they were to leave off work.”    (Josephus, Wars 4:9:12)

The top stone on the southwest corner of the Temple Mount bears an inscription that reads, “(לבית התקיעה להכ (ריז את השבת” meaning, “To the place of trumpeting to an(nounce the Shabbat).” Some scholars complete the missing word as, “to differentiate” (between Shabbat and the weekdays). The priests or Levites would signal the start of Shabbat and festival days by blowing the shofar or trumpet from this spot. This custom continues in contemporary Jerusalem, where a siren is sounded just before Shabbat. The inscription was found broken in pieces at the foot of the southwest corner, where zealous Roman legionnaires had probably hurled it at the time the Temple was destroyed. 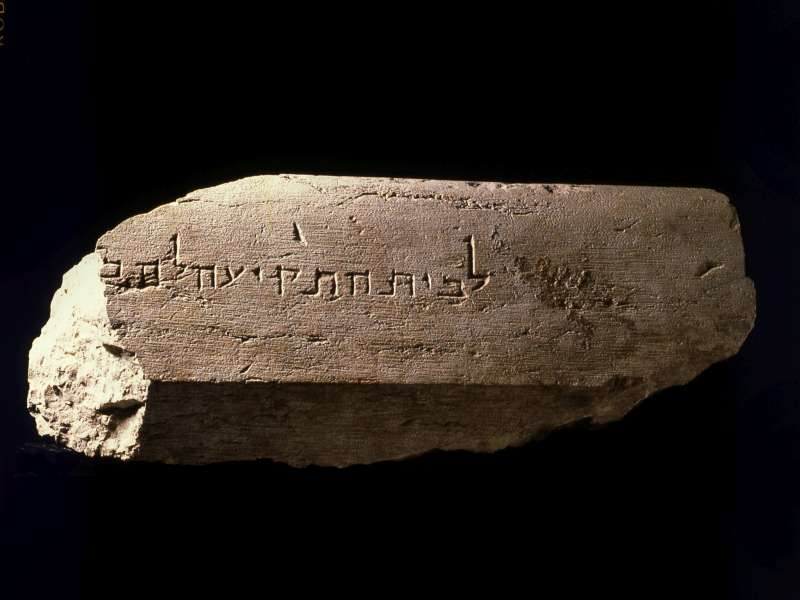 It happened once with Rabban Gamliel and the elders that they were sitting on the stairs in the Temple Mount.”     (Tosefta, Sanhedrin 2:6)

The western flight of stairs leading to the main entrance to the Temple Mount was 64 m wide. The entrance is known in the Mishna as the Hulda gates, and Josephus calls them the Double Gate and the Triple Gate. The stairs themselves were partly carved into bedrock and partly constructed of smooth, carefully laid stone slabs. Excavators uncovered part of the easternmost part of this staircase, the exit stairs, which alternated long and short steps to regulate the pace of the pilgrims as they approached the holy site. Traditionally, the only people who entered on this exit staircase were people in mourning. According to the Mishna (Middot 2:1–2):

All who entered the Temple Mount entered by the right and went around that way. They exited by the left [on the unearthed staircase]. If, however, something had happened, the person would enter and go around to the left. “Why do you go around to the left?” “Because I am a mourner.” “May He who dwells in this House comfort you. 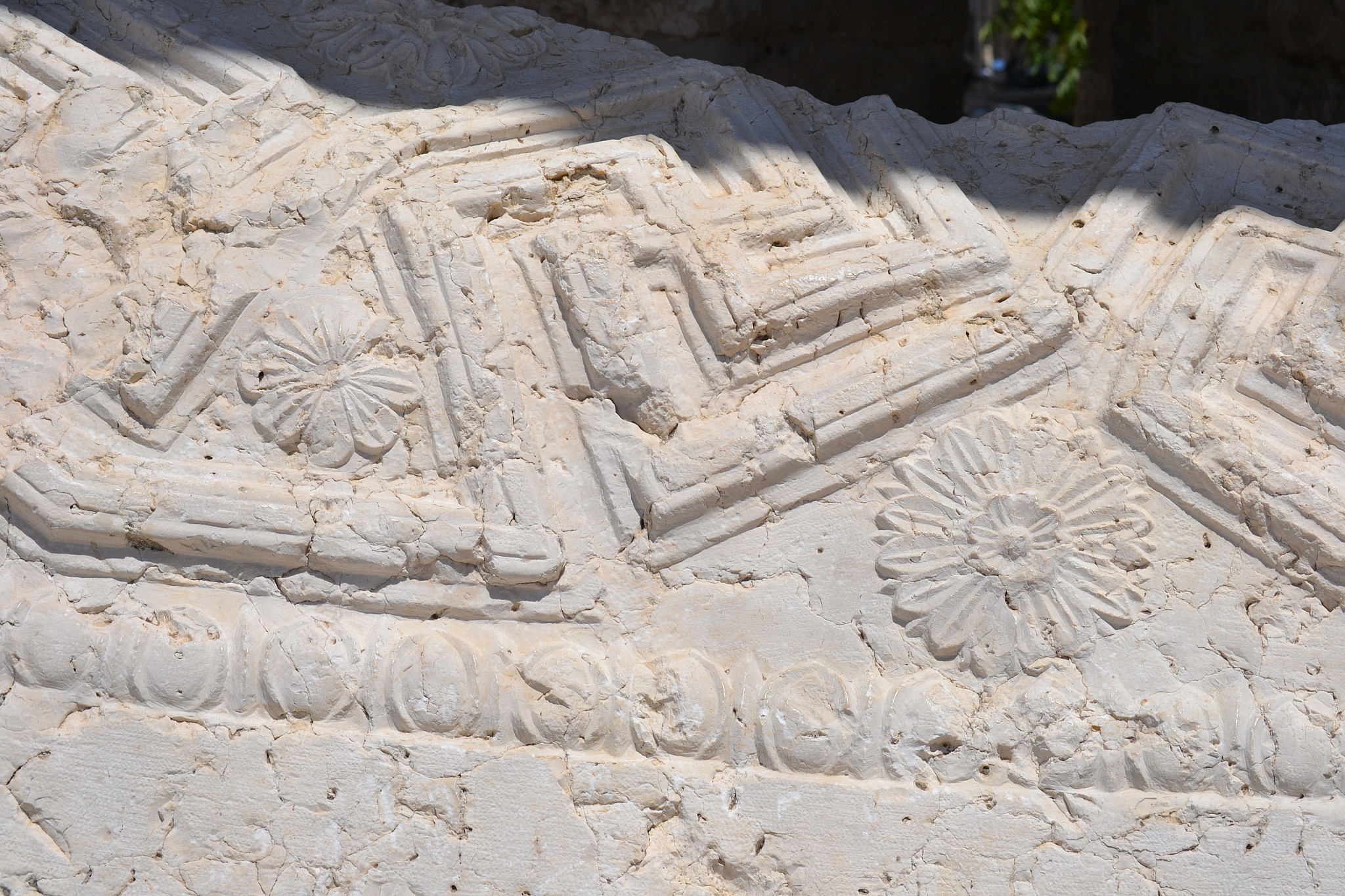 Carved stone ceiling fragment from on top of the Temple Mount found by Israeli archaeologists on the Herodian street during the post -1967 excavations. Photo (c). T. Book

The Temple was the largest cultic site in the ancient world and dwarfed any comparable place of worship. Because Herod could not make the biblically mandated size of the area of the actual Temple building itself any bigger, he ordered his engineers and artisans to enlarge the platform on which the Temple stood. The resulting platform, which still stands in its entirety, is approximately rectangular in shape, with asymmetrical sides (measuring 485 meters in the west, 280 meters in the south, 460 meters in the east and 315 meters in the north) and was one-seventh of the size of the entire city of Jerusalem! The Temple, the spiritual epicenter for Jews throughout the world and, of course, in Judea itself, accommodated as many as 100,000 pilgrims on the pilgrimage festivals of Passover, Shavuot, and Sukkot.

The Temple, atop the man-made platform, was described with awe by many contemporary or near-contemporary sources including the Mishna, Roman historians, the New Testament, and most famously Josephus’s (Wars 5:5) description of the Temple building itself covered in white marble and gold:

Now the outward face of the Temple in its front wanted nothing that was likely to surprise either men’s minds or their eyes; for it was covered all over with plates of gold of great weight, and, at the first rising of the sun, reflected back a very fiery splendor, and made those who forced themselves to look upon it to turn their eyes away, just as they would have done at the sun’s own rays. But this Temple appeared to strangers, when they were coming to it at a distance, like a mountain covered with snow; for as to those parts of it that were not gilt, they were exceeding white.

The Jewish people, and indeed people of faith throughout the world, have been greatly enriched by our understanding of Jewish life in Jerusalem at the end of the Second Temple Period that these archeological excavations have revealed.  They also serve to illustrate the profound millennia-old connection of the Jewish people to our land and to our eternal capital city of Jerusalem. 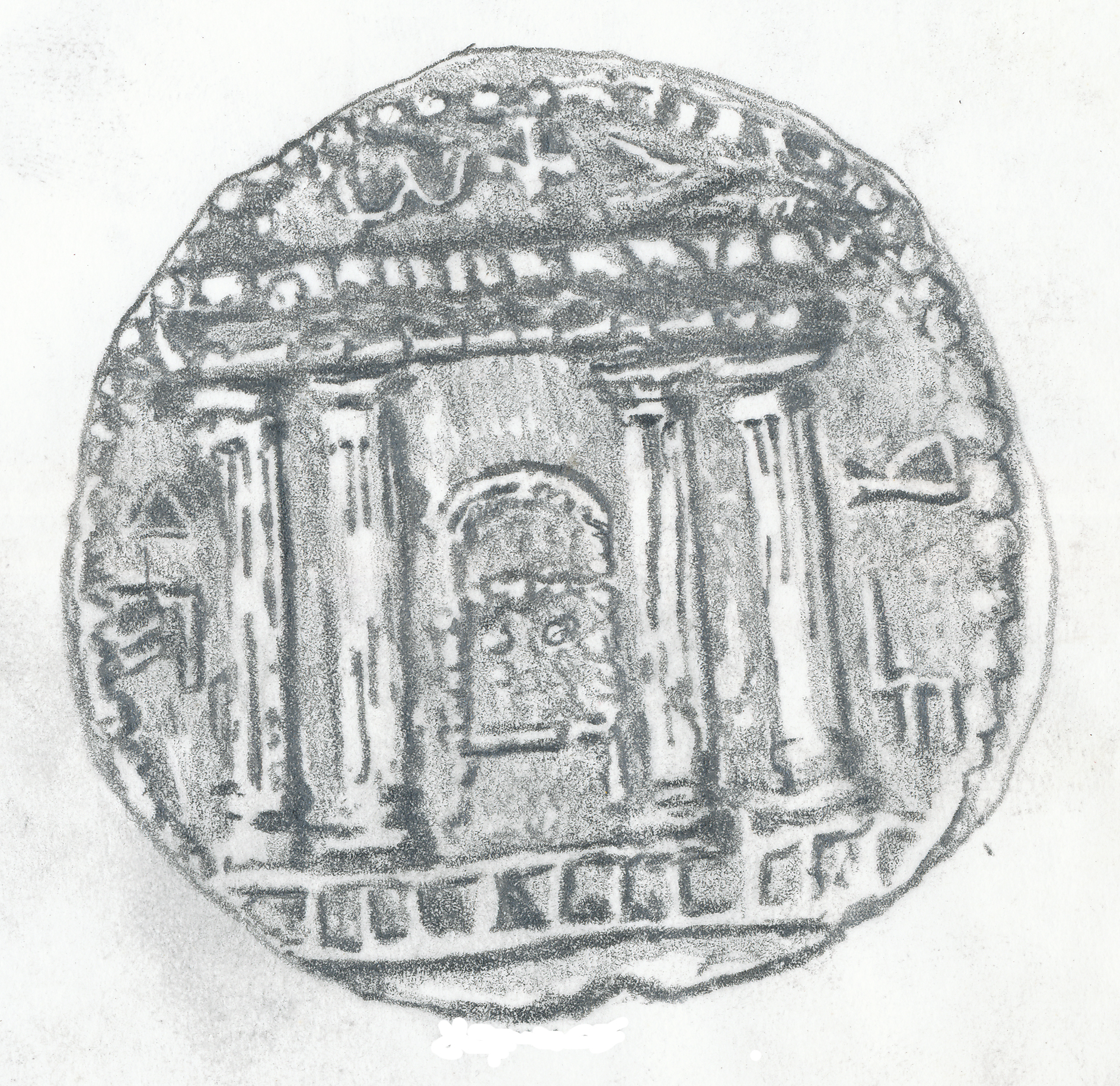 The facade of the Second Temple depicted on a Bar Kochba Period (132-135 CE) silver tetradrahm coin is the earliest depiction of the Temple building itself. Illustration (c) T. Book, 2020