First of all, I would like to greet all people in Israel and the Diaspora of Jewish people around the world with  CHANUKKA SAMEACH! May  this glorious tradition continues for centuries and millennia and sheds Light on all nations on Earth! Inspired by this Great Celebration, I  would like to share in a series of Posts my dream about the Light of the CREATOR in the Ten Heavens of the coming new Heavenly Jerusalem cosmic cycle! In my Post The Ten Divine Blessings in the New Cosmic Cycle published on the 30.11.2022, I briefly describe the Blessings. Now I would like also briefly to introduce, one after another, the Ten Divine Heavens which they could reveal. This Post fulfils the function of introduction to the new series. I believe that this series could shed light on the essence of the coming new Heavenly Jerusalem cosmic cycle.

If we look at the Kabbalistic Tree of Life in the World of Creation, there are Seven Heavens. In general, the Heavens are formed by triads (for instance, the Fourth Heaven, the Heavenly Jerusalem, is composed of Tiferet-Nezah-Hod). It is obvious that with the new Ten Blessings of God, associated with the ten Sefiroth (Please, see the Post from 30.10.2022), the Seven Heavens in the new cosmic cycle will reveal new riches. The connection between the Ten Divine Blessings and the riches of the Seven Heavens in the new cosmic cycle is an extremely interesting and exciting topic, related to both the content of the ten Sefiroth and the Paths between them.

We find very valuable information about the Seven Heavens in the World of Creation in the monumental book A Kabbalistic Universe by Z’ev ben Shimon Halevi (p. 65): Tradition states that there are seven Heavens. Some Kabbalists place the seven on the lowest ‘Sefirot of Construction’, while others, including myself, relate them, like the Days, to the central triads and two bottom sefirot. This again is a matter of viewpoint according to the scheme of Creation used. Again, some Kabbalists see ten Heavens, one for each Sefirah. All analogues, it must be remembered, are subjective.

In accordance with another great Kabbalist Leo Schaya, “The ten fundamental aspects of God, or Sefiroth, are manifested at first on the macrocosmical level in the form of ten heavens. The three supreme Sefiroth, kether-hokhmah-binah, are revealed in the three ‘heavens of heavens’, the triple immanent principle: that is, shekhinah-metatron-avir. Shekhinah is the immanence of kether, the presence of divine reality in the midst of the cosmos. Metatron, the manifestation of hokhmah and the active aspect of the shekhinah, is the principal form from which all created forms emanate; avir, the ether, is a manifestation of binah: it is the passive aspect of shekhinah, its cosmic receptivity, which gives birth to every created substance, whether subtle or corporeal. The triple immanent principle, shekhinah-metatron-avir, in its undifferentiated unity, constitutes the spiritual and prototypical ‘world of creation’: olam haberiyah. (Leo Schaya, The Universal Meaning of the Kabbalah, Unwin paperbacks, London, 1989, p.68)

In the light of the new Heavenly-Jerusalem cosmic cycle and the Ten Divine Blessings in it, it is reasonable to accept the existence of Ten Heavens, one for each Sefirah in the World of Creation. Of course, the other approaches mentioned above by the great Kabbalist Z’ev ben Shimon Halevi are also fruitful. He himself gave a profound and inspiring description of the Seven Heavens in his book A Kabbalistic Universe (pp. 65-73). In order to clarify the Ten Heavens in the new cosmic cycle, I will compare them with the Seven Heavens in the book A Kabbalistic Universe by Z’ev ben Shimon Halevi.

In accordance with the quoted in my Post from 21.10.3022, Fig. 81, EVOLUTION by Z’ev ben Shimon Halevi, the Seven Heavens are in the Kabbalistic World of Creation, that is, in the Great Mysteries: The Schools of the Spirit – from Self to Metatron. In Kabbalistic terminology, the First Heaven, Vilon, is where the three lower worlds meet (Keter in the World of Making – Asiyyah, Tiferet, in the World of Formation –Yetzirah and Malkhut in the World of Creation – Beriah). The Seven Heavens in the book A Kabbalistic Universe by Z’ev ben Shimon Halevi are presented in the diagram Fig. 19 – SEVEN HEAVENS  (Please, see the Fig. 19 below, at the bottom of the Post).

In the approach which I have chosen in receiving the Ten Divine Blessings, the Ten Heavens associated with the Ten Sefiroth can be characterized as follows:

Building the Seven Temples   The Testament of the Divine Rainbow

The New Humankind in the Reality of the Universal Soul

In the next sections, I will briefly present the Ten Heavens in the new Heavenly Jerusalem cosmic cycle, comparing some of them with the Seven Heavens in the system of Z’ev ben Shimon Halevi. I will also quote some explanations for the various Sefiroth by the great Kabbalist Leo Schaya, as well as some comments from my books and results from the collective work of our International spiritual group over many years.

From now on humankind will live in the wholeness of the reality of the Ten Heavens in the new Heavenly Jerusalem cosmic cycle, i.e., in the reality of the Hew Heaven and the New Earth as New Humankind. Because the New Humankind integrates the whole Messianic Line from the previous Indo-European cycle (the First Comings of the Divine Masters) and the New Appearances of the same Divine Masters in the  Heavenly Jerusalem cycle, so, describing the Ten Heavens, I will quote metaphysical material from their First and New Comings. Of course, these quotations are not coming back to the old world religions, but they are an elevation of the various spiritual traditions to the ultimate essence of the Hebrew Monotheism! Life in the new Heavenly Jerusalem cosmic cycle in the World of Creation is an integral Monotheistic Teaching for the whole of humankind!

Sometimes called the seven Upper Palaces or Halls, the heavenly levels define Beriatic states of Existence. The lowest Heaven is the highest spiritual condition of natural man; while those above set out the spiritual stages up through the Lower Halls of Beriah to the Divine Tiferet at the level of the Seventh Heaven which lies just below the Tiferet of Azilut. Above the Arabot of the highest Heaven rides the Glory of God – Adam Kadmon, the Divine image of Existence. Source: Z’ev ben Shimon Halevi, A Kabbalistic Universe, Kabbalah Society, London, 2007, p. 68. 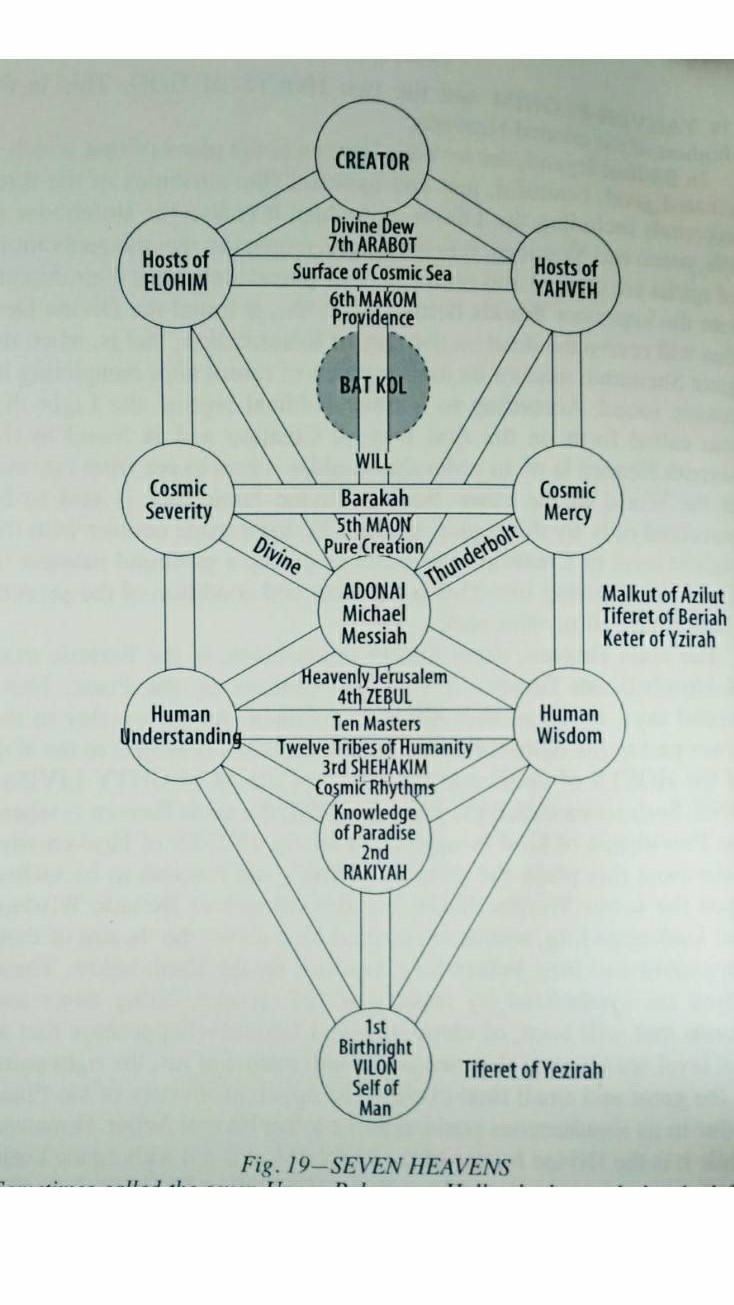