I receive voluminous hate mail from Lithuanians. They fall into six broad themes:

Lithuanians had banned Jews from civil service, so even one single Jew in Soviet bureaucracy was shocking to them. Lithuanians researched. If a Soviet had any Jewish ancestry, everything was blamed exclusively on that Jewish blood. It mattered naught if that Soviet was unaware of their Jewish bloodline, their great grandparents had renounced Judaism hundreds of years ago, or they were not even Jewish at all. Lithuanians identified them as Jews and demanded Jewish slaughter in retaliation for their own suffering.

Lithuanian national heroes such as Skirpa worked alongside Nazis to define Soviets as Jews. Today, Lithuanians still use these same Nazi talking points.

Lithuania was occupied by Nazis and Soviets, and they are responsible for all the bad things that happened to Jews, not us:

Whereas Jews are blamed for the actions of Soviets, Lithuanians believe they themselves are guilt free, because “Nazis” and “Soviets”. They consider themselves absolved of any crimes.

Less than 1,000 Nazis were in Lithuania. Lithuanians began murdering Jews before Nazis arrived. Nazis complained that they themselves could not bear the savagery and sadism of Lithuanians towards Jews.

The Lithuanian government claims Lithuanians were just following orders. They reject that same defense for anyone who was a perpetrator against an ethnic Lithuanian. 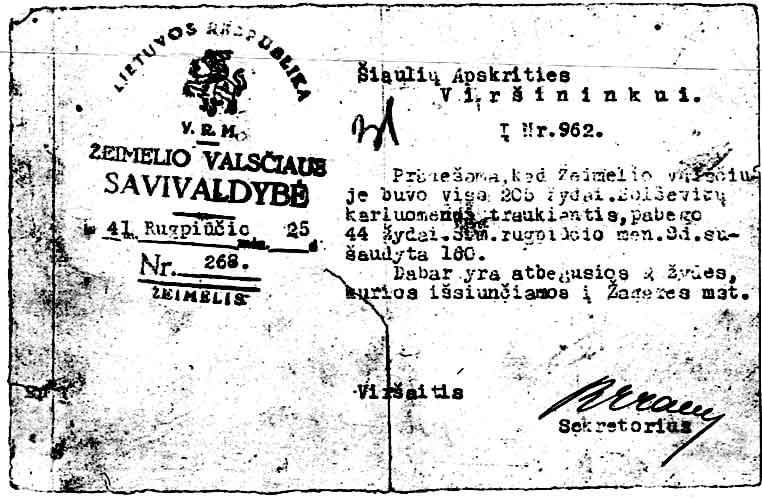 To illustrate the depth of Nazi involvement in the slaughter of Lithuania’s Jews, this order is revealing. It is a Lithuanian-language bureaucratic report from the Zeimelis regional government to the leader of Šiauliai County regarding the Jews of Zeimelis. The report is dated September 25, 1941.

The Lithuanian Activist Front and the Provisional Government directed that all of the local officials and police who had been removed from office by the Soviet takeover in June 1940 were to report back to their previous posts and resume their work as soon as the Nazis launched their expected attack. This had begun on June 22, 1941.

Lithuania says that the Provisional Government did not have any real power and therefore voluntarily disbanded in early August 1941. The disbanding of the government is true. But, Lithuania is silent as to who was running the machinery of day-to-day government and issuing the orders. It was Lithuanians themselves.

This document bears the name and symbol of the Lithuanian Republic and is written entirely in Lithuanian. There is not a word of German, nor any Nazi symbols. It is simply an ordinary Lithuanian administrative communication. Their cries of “we were following orders” fall flat in the face of facts. Official Lithuanian history is a fraud.

Lithuanians sweep their crimes under the Nazi rug. Truth inside Lithuania is not available, and they will criminally charge those that attempt to tell it.

Another common position is “The Judenrats and Jewish Police did most of the dirty work. Only the Germans & Soviets have culpability. They created the chaos. Everyone else was just trying to survive.” – While this specific quote is taken from a recently received hatemail, this position was most recently put forth by Lithuanian MP Rakutis, Chair of the Lithuanian Parliamentary Commission on National Historical Memory. Lithuania blames the victims for their own persecution. He absolves the persecutors. Lithuania’s official history is a fraud.

Honoring Noreika and other Holocaust perpetrators isn’t about Jew-hate; it is because they fought Communists:

Stalin was nice to his puppy.

Lukashenko is an environmentalist

People and nations can claim anything as heroic. A nation is identified by those they call their heroes. The fact that Lithuania can honor mass genocidal murderers by claiming their murders of Jew are inconsequential, is a statement only about Lithuanian values.

Here is a screenshot of a Facebook conversation with Marius Laurinavičius, Senior Expert, Vilnius Institute for Policy Analysis. No further analysis is required. 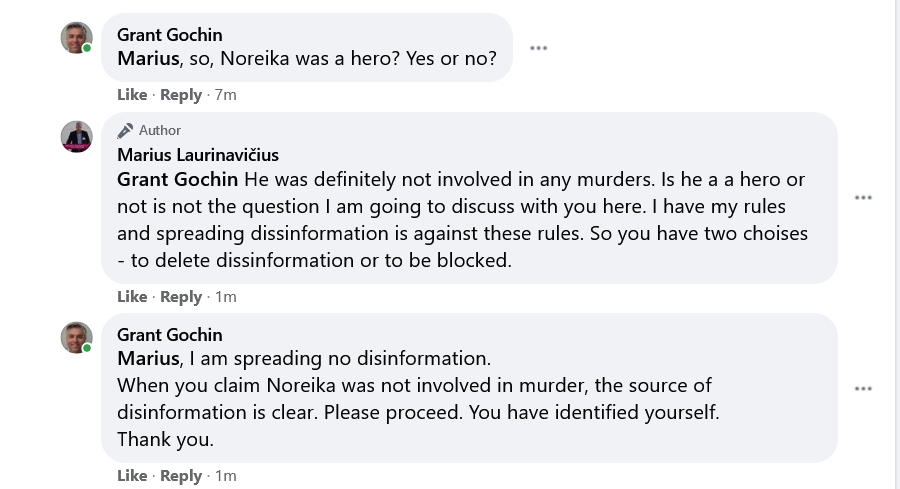 Lithuanians appear obsessed with Palestinians. I constantly receive Hamas and Hezbollah talking points in reference to Holocaust issues. The murders of 220,000 Jews between 1941-1944 were seemingly prescient in advance of their defense of Hamas.

Lithuania presented itself to the world as a human rights country, until Lukashenko weaponized refugees. The same Lithuanians that reject refugees of color, are somehow fervent supporters of Palestinian refugees. I wonder why that could be?

Lithuania sits on the UN Human Rights Council, alongside Somalia. Both have similar legal positions on homosexuals. 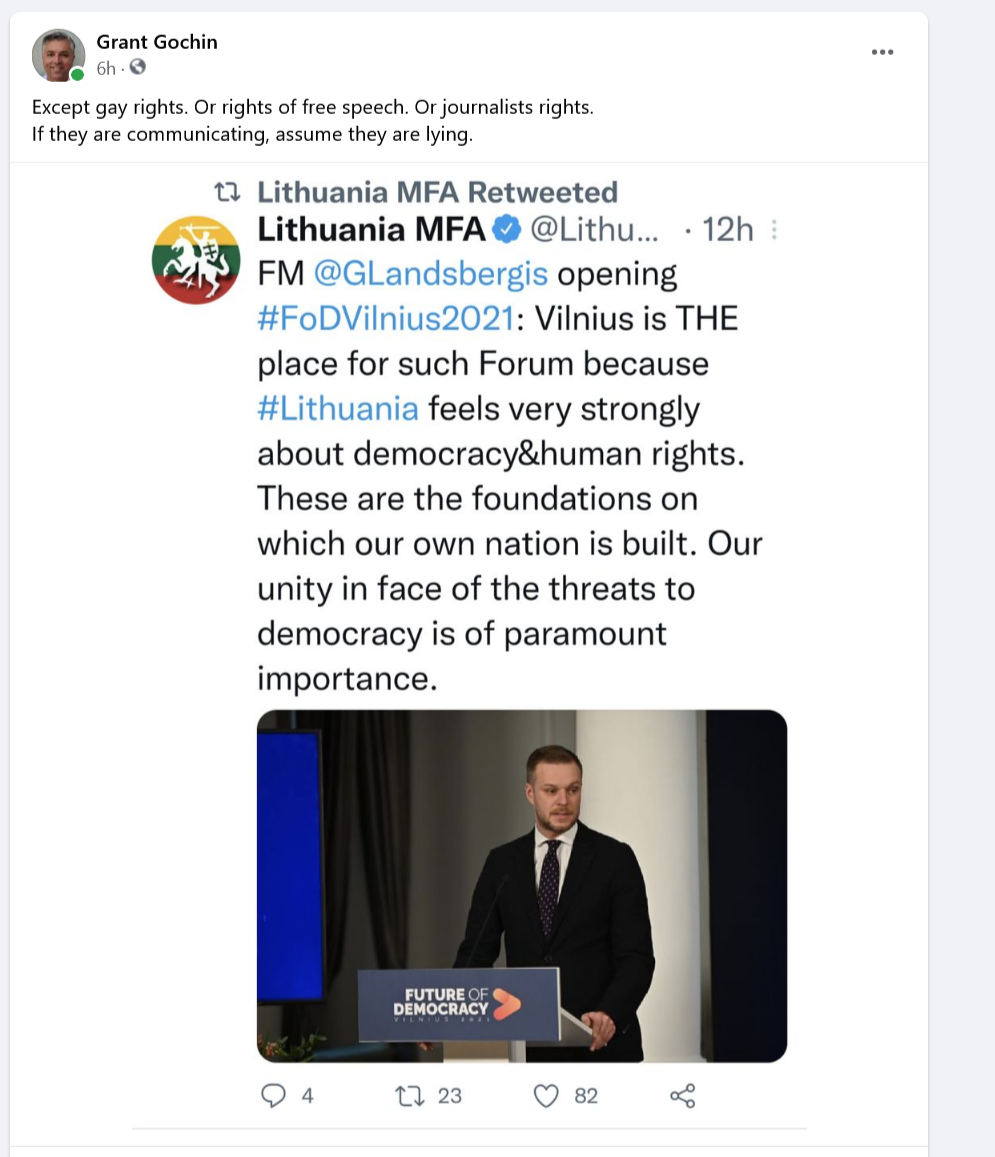 I have sued the government of Lithuania many times demanding exclusively truth. I have refused to ask for monetary compensation as I want no blood money from Lithuania.

Lithuania can never recover from having slaughtered their most economically active citizens, nor from their Holocaust perpetration and frauds. In the process of my litigation, one of the (many) reasons the Courts rejected my cases is my refusal to demand financial compensation.

Lithuania wants financial compensation from Russia for their occupation. Lithuania survives on charitable handouts from the European Union. Their military defense is funded by USA. Lithuania is desperate for tourism and investment from Jews. They are so terrified of having to return stolen property that they divert attention using old antisemitic tropes as their validation. It is all they have. Official Lithuanian history is a fraud.

You have no proof

This reasoning is best illustrated from one of my own legal actions in Lithuania. Lithuania had a two-pronged citizenship restoration policy; non-Jews could successfully claim citizenship, but Jewish claimants were to be denied. In my own citizenship case, one of the Lithuanian Government defenses was:

My Grandfather was Samuel Gochin born in a tiny village called Papile which had 1,000 Jews. The Lithuanian Government postulated that there could have been two Samuel Gochins, both born on the same day, both to parents with the same name. They hypothesized that one of these births was entered into the birth records, and the second, imaginary family, was not. I was required to prove that I was not descended from the imaginary family. Being unable to prove a negative, my citizenship was denied. I sued the government of Lithuania five times to prove their Judenfrei citizenship policy. Following the international outcry after my cases, their Parliament was required to change their laws. Thousands of South African Jews have since been enabled to claim back their Lithuanian citizenship.

The ridiculous Lithuanian position was indistinguishable to that applied to my defenseless Lithuanian Great-Grandmother in 1922. Their rejection of her citizenship was based on no facts, and led to the death of her husband, multiple children and multiple grandchildren. The government of Lithuania falsely claims these deaths were caused by Soviets. They were in fact caused by the government of Lithuania. Lithuania applied that same ideology to me almost 100 years later. My Great-Grandmother had no means to defend herself. I do. Lithuania has accused me of being a Russian agent many times. It seems blaming Russians or anyone else is their constant theme.

Lithuania has used imagination to declare with certitude that murderers of Jews were actually rescuers. They reject proof that would be deemed conclusive by any legitimate entity. Their official history is a fraud validated by their government and courts.

The remaining hatemail I receive are just variations on these themes.

The Government of Lithuania is adamant that their leadership’s call for elimination of Jews from Lithuania prior to the slaughter was just an “incident of antisemitism”. It was not a precursor to genocide. Calling for genocide does not impair their entitlement to honors. Lithuania’s Jewish population is approximately 3,000, down from about 250,000. A 99% success rate for the agenda of their national heroes. These heroes are rewarded for their service to the nation.

My Lithuanian born grandmother taught me – “Judge a person by who hates them”. I do. Each time I receive Lithuanian hate-mail, I feel validation.

On Monday, November 22, Lithuanian President Nauseda is required to answer if he too believes Holocaust perpetrators are national heroes. I am sure President Nauseda is not an antisemitic Holocaust distorter. His staff responded that Congressman Sherman is “just a politician” and that Lithuanian government clerks know more about US protocol and law than this senior member of the US Foreign Affairs Committee and multiple senior, specialist US lawyers. Now President Nauseda himself is due to personally respond. I will report back.