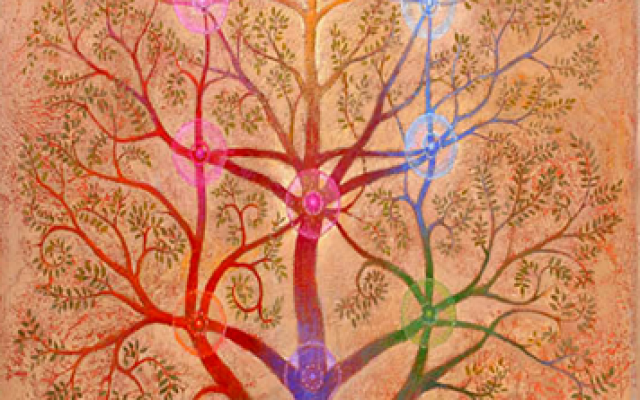 Developing the Family Life as a Divine Temple! Source: YouTube

In the Kabbalistic system of Z’ev ben Shimon Halevi the third Heaven, defined by the triad Nezah-Hod-Yesod, is named Shehakim which means Skies… In its purely Heavenly aspect, the third Heaven is where the twenty-two Hebrew letters again manifest to reveal laws that govern the levels above. It is to this place that incarnate man can rise during prayer and be instructed in the mysteries of Creation. Here, we are told, the great millstones of Heaven can be seen, slowly turning Creation through its great cycles, while the Grace of God brings forth the manna, the food of Heaven, to sustain the Worlds below… Tradition says (“that in special moments of prayer”), the third Palace is filled with a pure light that passes down the central column of Azilut and Beriah to illuminate the twelve tribes or twelve celestial spirits of mankind who are said to dwell there.

In the accepted system of Ten Heavens (one for each Sefirah), the Third Heaven is connected with Hod, the Reflection, the echo of Glory, the еchoing Splendor. The great Kabbalist Leo Schaya writes about the Sefirah Hod in one of his book: the multification itself does not come from netsah, but from the emanation opposed and complementary to it, that is, from hod, divine ‘glory’… the ‘female’, receptive and negative power of the creator, that which separates, forms and transforms all the worlds produced indifferently by netsah. (Leo Schaya, The Universal meaning of the Kabbalah, Unwin paperbacks, London, 1989, p. 54).

If we delve into the Kabbalistic books of Z’ev ben Shimon Halevi and Leo Shaya’s interpretation of the Sefirah Hod from his book The Universal Meaning of the Kabbalah, we can relate this Sefirah to the construction of Seven Temples in the life of humankind, in which the Spirit of G-d abides forever. These are the construction of: a) Human Beings as Temples of G-d; b) The Families, c) The Spiritual Communities; d) The various Nations; e) The entire Humankind, f) The reality of the New Earth; g) The reality  of the New Heaven. Building life on all levels of Being as Divine Temples is the main goal of the Enlightened Humankind who will live in the reality of the coming Heavenly Jerusalem cosmic cycle of evolution.

The development of the Seven Temples in the life of humankind was one of the main themes in our spiritual work. Examples of this can be found in my autobiography On the Path of Enlightenment, in building the Family life as a Temple of G-d, in the formation of our international spiritual group, in appreciation of the various nations with whom we are connected as a Temple of God, in understanding all humankind as a great spiritual family that lives on a sacred Earth as a Temple of Life, while the Heaven above it is G-d’s Temple of Creation. These visions are presented in great detail in my books, on our website, as well as in the recordings of many lectures, seminars and workshops in our spiritual group. Below I will only introduce a few archetypal ideas in relation to these majestic Divine tasks.

The Human Beings as Temples of G-d.  According to Kabbalah, the Human Beings are created in the image and likeness of God and this is why they have to live in harmony with all of Creation: Man is the most perfect image of universal reality in the whole of creation; he is the ‘incarnated’ recapitulation of all the cosmic degrees and of their divine archetypes. Indeed, through his spiritual faculties, psychic virtues and corporeal forms, he represents the most evident symbol of the ten Sefiroth, and his integral personality embraces all the worlds: his pure and uncreated being is identified with the Sefirothic ‘world of emanation’ (olam ha’atsiluth); his spirit, with the prototypical ‘world of creation’ (olam haberiyah); his soul with the subtle ‘world of formation’ (olam hayetsirah); and his body, with the sensory ‘world of fact’ (olam ha’asiyah). ((Leo Schaya, The Universal meaning of the Kabbalah, Unwin paperbacks, London, 1989, p. 70)

Therefore, in the new Heavenly-Jerusalem cosmic cycle, the Human Beings have to restore the Axis Mundi (the Universal Axis) of their consciousness and live simultaneously in the whole vertical structure of Creation: with purified physical body and enlightened personality in the material world; with blossoming Soul in the Celestial world and with awakened Divine Self in the highest Divine world. Thus, they will develop themselves as Divine Temples in the material world, in the world of the Universal Soul (the reality of the New Earth) and in the highest Divine world (the reality of the New Heaven), ready for union with the CREATOR. As a result, the human beings and humankind as a whole (i.e., the twelve tribes or twelve celestial spirits of mankind) will live on all levels of Creation as Divine Temples, as the echo of Glory, the еchoing Splendor. Here again I would like to emphasise that the Sefirah Hod, the Divine Glory is the one which separates, forms and transforms all the worlds (see above). This process ‘structures’ the emanations within all Sefiroth as Divine Temples.

Developing the Family as a Divine Temple. In accordance with the great myth (introduced by Plato) every human being on Earth is in eternal search of his or her soul mate. This myth reflects the Divine impulse within everyone to meet their beloved partner and soul mate, to enter into Divine union and to create a beautiful Temple of love, light and life together. By undergoing the ‘first’ and ‘second resurrections’ together, the man and woman in love, interweave the energies of their seven chakras to build the common Divine Temple. They become personifications of the New Adam and the New Eve and enjoy the wonderful spiritual fruit of the Tree of Life in all three worlds of Creation. As a result, the couple becomes a holy family and when the birth of beloved children follows, they are conceived with the power and the mystery of the Divine Spirit. Their life together is like an eternal journey in the Kingdom of God.

Building the Spiritual Community as a Divine Temple. (There is a friend who sticks closer than a brother: Proverbs 18: 24). In the coming epoch of the new cosmic cycle, a new type of relationship will develop within the broader community – cosmic-spiritual friendship. In this type of relationship, the participants not only look at the same direction together (towards a beloved Divine Master or cherished spiritual goal), but also appreciate each other as cosmic-spiritual beings in whom the Divine Spirit lives. Thus, they help each other to build the personal Divine Temple of life and to form altogether a wonderful community-temple of Divine love, joy, peace, gentleness, goodness, purity, friendship, appreciation, help, mutual understanding and many other sacred virtues. The mystery of the Divine Wedding manifests in this Temple of life as the most pure and beautiful relationship between Sons and Daughters of G-d, as brothers and sisters in absolute purity, tenderness, friendship and mutual exchange of Divine energies. Surely, people who engage in cosmic-spiritual friendship, build their community as a Divine Temple where G-d’s Spirit is always present.

Building Humankind as a Divine Temple. (Now God’s home is with mankind! He will live with them, and they shall be his people. God himself will be with them, and he will be their God: Revelation 21:3). All peoples on Earth have to form one great spiritual family living in peace, friendship, mutual respect and understanding, fulfilling the purpose of humankind envisaged by G-d from the beginning of time. Humankind has to create its life as a Divine Temple where the different nations, following different world religions, form altogether the tabernacle of Divine worship. The story of the twelve tribes of Israel carrying the different segments of the tabernacle has to be enacted now on a planetary level by all the peoples of the world carrying the new tabernacle of worship. When humankind builds this Divine Temple of worship its heart centre, originating in the Universal Soul, will open. Then humankind will realise its Divine mission in Creation, guided by the Universal Spirit: i.e., to bring the reality of the Kingdom of God on Earth and transform it into a Garden of Paradise, to serve as a mediator between Heaven and Earth by building a Divine Temple of life, and to co-create with G-d, Who now makes all things new.

Appreciating the New Earth as a Divine Temple. (Then I saw a great white throne and the one who sits on it. Earth and heaven fled from his presence and were seen no more… Then I saw a new heaven and a new earth: Revelation 20:11, 21:1). On a planetary level we have to witness and participate in the dramatic transfiguration of the Earth from a solid material body into a beautiful shining astral planet. Then, for us, the Earth will appear as a living Celestial Being with its own planetary Soul (a part of the Universal Soul) and with a planetary Spirit – i.e. the planetary Divine Logos who leads the evolution of the Earth. Of course, this metaphysical change must occur first in our consciousness, that is, in our understanding and perception of the Earth transformed by the light of the New Creative Impulse from G-d. Naturally, if we change our understanding and perception of the Earth, we will act and behave differently. As a result, the etheric layer around the Earth will become a space for the fusion between the Heavenly Jerusalem and the illuminated Earth. Figuratively speaking, a magnificent etheric Temple will be built upon the whole planet with a gigantic cosmic-spiritual Cross of Light at the centre of the Temple. In this transfigured Earth-Temple all kingdoms of life will be present in Divine Harmony, Wisdom and Truth.

Appreciating the New Heaven as a Divine Temple. (Then I saw a new heaven and a new earth… He who was seated on the throne said, “I am making all things new!: Revelation 21: 1, 5). We could imagine G-d (the Absolute Origin of Being) as an eternal cosmic-spiritual Sun Who gives Light, Love and Life to the whole of Creation. When the Lord says And now I make all thing new, the Divine Spirit starts to emanate from the Throne of God through multiple images and manifestations. He activates all the Divine Masters and Light Beings in the higher worlds and gives them a new quality, a new radiance in accordance with the new mysteries coming from the Living G-d. At the same time the  Personifications of the  Divine Feminine radiate from the Throne of God forming the substance of the New Reality, thus in absolute harmony and union they illuminate the whole of Creation as a Divine Temple. In it the Divine Feminine forms the substance, while the Divine Spirit is the Living Vertical Cross of Creation.

Obviously, building and experiencing the Seven Temples in the Third Heaven is one of the  most joyful, exciting, inspiring and creative Divine tasks!

Advertisement
About the Author
Leon was born on August 15, 1941 in Sofia, Bulgaria. His family was victim of a Holocaust Ghetto. His father Issak Moscona became a distinguished author of many articles and books about the Sephardic culture. Leon is on a spiritual journey for more than 50 years. Achieving Enlightenment, he described it in more than twenty books, many articles, and more than 500 lectures in various countries in Europe and USA.
Related Topics
Related Posts
Leon Moscona