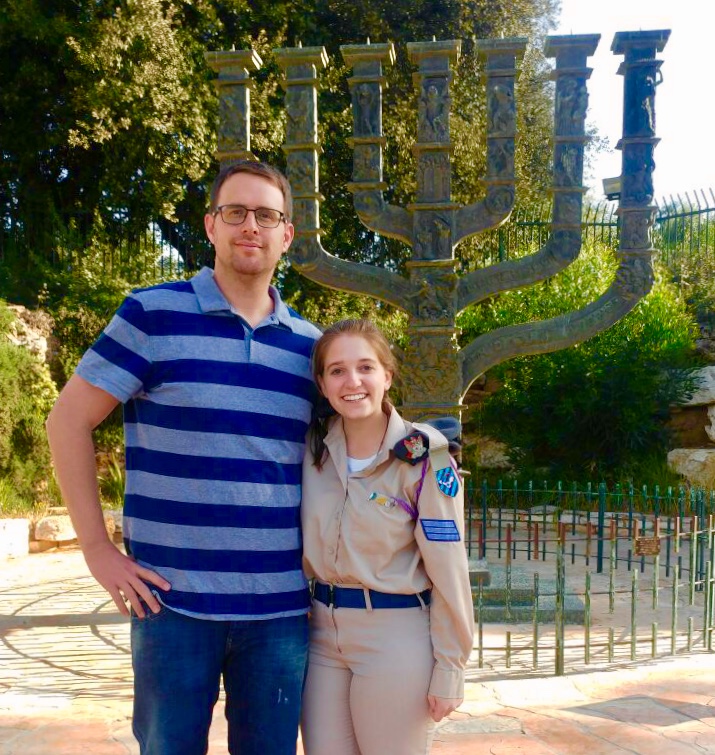 Rachel and Yair. Who’s the Israeli and who’s the American? Guess again.

On the eve of Israel’s 70th birthday, the Jewish People Policy Institute released a major study supporting “today’s prevailing opinion… that Israel and Diaspora Jewry are growing farther apart.” Rachel and Yair may be the exception. Or perhaps the rule for keeping us close.

Amidst the doomsday  prophesying that Israel and the Diaspora are drifting apart, it’s comforting to have a statistic-defying anecdote to share demonstrating that the bond between us is tangible and stout.  This one has to do with the festive ceremony this week on Mt. Herzl ushering in Israel’s 70th independence day. More specifically, it has to do with the 120 “outstanding soldiers” chosen by the Israel Defense Forces to participate in the event. Actually, it has to do with just one of them.

The story begins 15 years ago, when my wife’s son Yair, fresh out of the army, was sent by the Jewish Agency to work in a New Jersey day camp run by the Jewish Community Center of Metrowest, which also provided host families for the young Israelis. One of them got stuck with Yair. Or, should I say, got stuck on Yair? He and his adopted family hit it off famously, so much so that when he came back to work at the camp the next summer, he’d live with them again.

The impact of the experience on each other’s lives was instantaneous. But little could the parents, Sharon and Eric Gordon, have imagined at the time that their then eight-year old daughter, Rachel, would a decade and a half later be wearing an IDF air force uniform, marching in formation as a celebrated soldier in celebration of Israel’s 70th birthday.

Rachel holds Yair at least partially responsible for her decision to come to Israel and do a full two years of army service. “Of course he was a big influence on me,” she told me over lunch at our home last Shabbat. “There were a whole lot of Israel connected things my family was involved in and they’re all part of what brought me here, but the ideas and the activities and the falafel — sure, they were all important, but it was having real people to connect to, people who connected to me, that made Israel, well, not just a place to care about from afar, but also people to care about from up close.” Which is exactly what she’s been doing for most of the last two years, serving in the Israeli air force as an NCO responsible for helping soldiers deal with a whole range of personal issues relating to their own army service. Apparently she’s doing a good job, which is what earned her the coveted honor of being selected as her regiment’s recipient of the president’s award of appreciation for outstanding service.

“You must be so proud of all she’s giving to this country,” I said to her parents, who came to Israel especially to accompany her to the ceremony. “I can’t begin to tell you,” was her mother’s response, “but Rachel has gotten far more out of being here than what she’s given.”

It’s not surprising, then, that far from resenting Yair’s influence on their daughter, they are thrilled about the way things have worked out. “Still, you had to have been anxious about her decision to join the army,” I averred, expecting them to tell me how difficult the last two years have been for them. That wasn’t the reaction I got.

“Sure there was a bit of nervousness about her becoming a soldier,” Sharon told me, “but to tell you the truth, mostly I was jealous. I wish I’d have had the opportunity to do what she’s doing. I’ve been to Israel 17 times now, but her being in the army has connected us in a whole different way. And it’s connected her in whole different way as well. The relationships she’s developed with her friends in the army, they’re on such a higher level than the normal relationships kids develop in America.”

“The whole experience also changed me,” Yair interjected. “Before that summer with the Gordon’s, the only experience I’d had in America was Disneyland. I had no idea about the Jewish community there. I had no idea how important being Jewish was for them. I was amazed to see everyone showing up in synagogue on Yom Kippur — even if they had to drive to get there. I didn’t grow up traditional. I was Israeli. That was being Jewish for me. But for them, they’ve found ways to make Judaism deep and meaningful in their lives that we should learn from in Israel. Working in the summer camp, it led to a really deep appreciation of us being one Jewish people. And having my adopted little sister join the army now – wow!”

“He’s given us so much more than we ever gave him,” Sharon said about Yair. “This young guy who barely spoke English 15 years ago but somehow immediately becomes part of our family, who’d have imagined that one day he’d be Rachel’s emergency army contact and go-to person for everything…”

All this doesn’t mean that the dire warnings about Israel-Diaspora relations being stretched to the breaking point aren’t to be taken seriously. A major study undertaken by the Jewish People Policy Institute and released on the eve of Independence Day gives credence to “today’s prevailing opinion… that Israel and Diaspora Jewry are growing farther apart.” As chief program officer at her JCC, Sharon sees that as well. In the extreme, she was recently the target of a vicious diatribe from an involved member of the community accusing her of abetting “the occupation and oppression of the Palestinians” for having arranged for the performance of an Israeli army troupe. Far more widespread and worrisome, she tells me, however, is the ever-growing resentment on the part of American Jews over the government’s backtracking on the matter of pluralistic prayer at the Western Wall and the lack of recognition of non-Orthodox Judaism in Israel in general. “Which only emphasizes the importance of promoting opportunities for fostering the sort of relationship that developed between Rachel and Yair,” she insists, “and why we’re working now with The Jewish Agency to increase the number of shlichim in our community.”

As to Rachel, she’ll be going back to America to finish college after getting out of the army in another two months and though “I don’t know what will be next,” she tells me, “however things develop, this experience will stay with me forever, as will my love for Israel and my pride in Israel and my wanting to share Israel with others.” In the meantime, she says, “I’m really excited about my summer job. I’m going to be in charge of six young Israelis, fresh out of the army, who will be coming to camp the same way Yair did 15 years ago.”