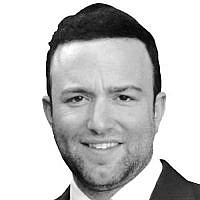 The Blogs
Benjy Morgan
Apply for a Blog
Please note that the posts on The Blogs are contributed by third parties. The opinions, facts and any media content in them are presented solely by the authors, and neither The Times of Israel nor its partners assume any responsibility for them. Please contact us in case of abuse. In case of abuse,
Report this post.

The Problem
In Alan Dershowitz book “The Vanishing American Jew” he quotes a Harvard report which forecasts that by the year 2076 the American Jewish community will shrink from five million to around one million, and according to a worst-case scenario, to as few as ten thousand!  This frightening statistic leads us to ask the obvious question: what might cause Jews to abandon Judaism in such large numbers?

I have spoken to many Rabbis and professionals involved in the fields of education and outreach; asking them what they think is the cause of this mass abandonment. Some say the decadence of society, laziness or a lack of spiritual seekers. That might be the more fashionable explanation, but the truth is much more dispiriting.

Having spent many hours with the COO of Olami – Rabbi David Markovits and his team of worldwide Researchers, and others – including one of my teachers, Rabbi David Aaron from Isralight Jerusalem, we have found something fascinating. For the majority of young Jews they find Judaism to be soulless, disempowering, uninspiring and even unethical and is associated with suffering, conflict, rules and restrictions; the very opposite of freedom, inspiration, joy and spiritual fulfilment. This is not just one Jew – over the past decade in front line education, I have found hundreds maybe even thousands, who feel this way. Hence it’s not surprising that Jews are abandoning Judaism.

If we make a brief comparison to Buddhism, the contrast really highlights how much Judaism is missing its public image. Buddhism is associated with spiritual awakening, mindfulness, heightened awareness, cosmic consciousness, freedom and inner peace. It therefore attracts numerous Jews, who are searching for all the above. According to some estimates, as many as one third of non-Asian Buddhists in North America are Jewish.  Shockingly, the majority of accomplished Buddhist teachers in North America are Jewish.

In summary, for most Jews, Judaism is a turn-off. A brand which is irrelevant, restrictive, lacking depth and meaning.

There has never been a more opportune time to attempt this rebranding. Corona has provoked in people the urgent need to make more sense out of their endangered lives. They have been challenged to ask life-altering questions, and they are thirsty for real answers to the big question: “What’s it all about? Why am I here?” In America 44% of the population see the COVID-19 pandemic as a wake up call (anecdotally, there has been a large increase in the number of Google searches including the word ‘god’). People are asking questions and searching for answers. When people have less of the physical, they crave more of the spiritual.

Today’s enormous spiritual void can be filled using today’s cutting edge marketing and branding strategies, state of the art online digital  technologies and social media networks. To that end, we have to create an approach that achieves the goal of conveying the message that Torah is about living a wholly healthy and fulfilled life. Maybe we should take a leaf out of the book that Rav Kook – the Chief Rabbi of Israel close to a century ago wrote.  He proposed the following strategic four stage plan to truly create a Revolution for Jews who see a Torah Life as irrelevant to them.

Torah’s life-changing wisdom and its meaningful lifestyle are our products, but in order to successfully market and distribute Torah we need to operate our company at a level of invested competence and financial resources – just as mega-corporations such as Apple and Samsung have – after all we stand to lose far more than they do. Only with such investment can we expect to truly succeed. To this end, we must engage in a three-pronged research and development  programme, and it must be rolled out in this particular order.

Marketing
We need to gather together leaders in marketing, to both rebrand Judaism’s message to the unaffiliated and craft successful promotional strategies and determine optimal multi-media coverage.

The Product
This stage involves researching our product. Torah is not there to be altered, but we need to create compelling, workshops, courses, life-changing seminars and full curriculums that offer Torah’s practical genius and advice to living exceptionally fulfilling lives.

Distribution
Post development and branding, we must identify and activate distribution channels to reach the millions of Jews worldwide who have yet to be exposed to the Judaism that is rightfully theirs.

There are three key areas where when people are asked “what needs to change” will come up with ideas in one of these categories, and its usually in how we distribute – the same old product. But if we just tweak one – it would be like changing the distribution of an unpopular product without changing the product itself.

If we are really serious about reversing the frightening trend, then we must bravely accept the failings of our past, yet courageously implement and accept the challenge of building a radical rebrand to build a revolution that the Jewish People so desperately need.

About the Author
Born in New York City, and raised in the UK, Rabbi Benjy Morgan spent 14 years studying in the top Rabbinic Training Academies in the world. He received Semicha from both the Rabbinical Supreme court in Israel and the Jerusalem Kollel in 2010. He is an award winning public speaker and lecturer, and an avid singer and guitar player. Rabbi Morgan leads many annual trips abroad, weekly lectures, events and Friday night dinners that are held for hundreds of Young Professionals in the JLE Centre and in many venues around the world. As CEO, Rabbi Benjy Morgan is responsible for the innovation and strategy of the JLE in the 21st century. He oversees the education across the five different departments in which the JLE operates. He guides 35 dedicated staff, and dozens of weekly programs that service over 1000 individuals each week.
Comments