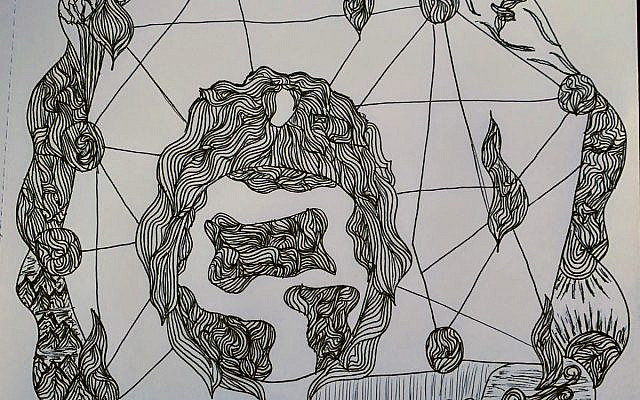 I drew this as an image of how intricate and connected I feel humanity is to nature and the composition of the world. If we only knew how significant we were...

Imagine an initiative of the entire world. Community combined and unified to defeat a bigger power than the whole? To overpower a source threatening the freedom and identity of not only oneself, but that of the community’s? A beautiful concept.

I read the news, watch the viral videos, hear personal stories and I can’t remember a time when the world spoke the same language.

I have think back, back to biblical times.

The Tower of Bavel (Babel) in actuality, existed as a physical manifestation of opposition to holiness, altruism and unity. The passionate effort to “defeat G!d” in my opinion roots from a deep misunderstanding of spirituality and connection to higher levels of the soul and universe. I once heard a quote that to me, summarizes the miscommunication of higher power—

“One is not punished for their disbeliefs, but rather by them”

While reviewing this famous Torah event, I notice that the incident was not exclusive to Jewish heritage and culture, but that of the entire world’s—a humanity’s history.

The truth is that everything possess equal potential. So yes, if the global society had maybe re-evaluated their motivations and understanding of who their true enemies were, the Tower of Bavel would have been a very different story.

However, the painful reality of this story, is that of its eternity. The tower is constantly falling and more tragically, being rebuilt.

The world-wide punishment of the group that built a tower to overcome G!d was eternal bigotry. Eternal intolerance. Eternal racism. Eternal sexism. Eternal isolation and solidarity from a whole that was once powerful enough to speak the same language.

This week’s Torah portion provides insight and focus on the tribe of Levi, specifically the cities of refuge designated for “unintentional murderers.”

According to Likut Slichot, a book written by the Lubavitcher Rebbe, the reason why unintentional crimes retreat to the territory of Levi is because intentional murder exists as the absolute antithesis of Leviite morality and virtue. Due to the lifelong commitment and responsibility to uphold the spiritual health of the nation, the Leviite’s continuity of holiness must also be in protection of those who did not cause murder born of negligence.

Negligence is the catalyst of psychological, societal and spiritual demise.

Among all opinions, religions and cultures, intentional crime and murder sever a wound so deep among people—life and humanity deteriorate. According to Judaism, the ultimate relationship between Omnipotence and individual becomes lifeless. If we all contain a significant reality of G!d within ourselves, then hate and hurt not only infect interpersonal relationships, but also that of divine dynamics.

I see a crumbling society. I cannot help but look within my Jewish communities and feel so hurt. Pained by our choices to link and contribute to the constructed foundation that is hate. To yell, beat and betray the brotherhood. I know the roots of my nation are not planted on the fertile grounds of privilege and popularity. I know that we get comfortable, trust the nation’s hands that hold us. However we are punishing ourselves in the disbelief of our connection to the greater whole. We are punishing ourselves by hating another, we are robbing ourselves of respect, value and integrity.

The quaking and trembling of awareness is good, I would even say a blessing. I believe, like I believe the nations constructing a tower against G!d should have re-evaluated, that we as a nation should re-evaluate our true enemies. Is it a disbelief that I could possibly be intolerant, racist, sexist, etc.? If so, coming to the realization that one is not only punishing themselves by this disbelief and ignorance, but it is also their negligence that is just another stone to build a broken world.

I pray for not only the healing of the worlds within and beyond us, but for a re-model. A reality so shaken it crumbles, but so united the composition speaks, sings and solidifies the same language. A language of elevation and a language of courage.

The Tower of We Can Do Better.