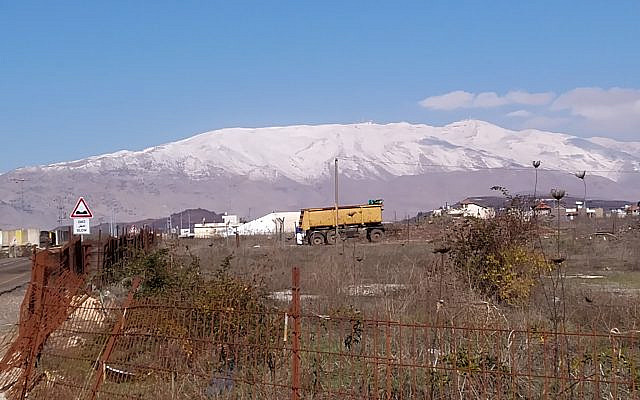 The magnificent presence of Mt. Hermon dominates the skyline as we make our way north, growing larger and more imposing the closer we get. Splendorous, with its pristine peaks covered in snow, it seems to glow in the sunshine. The air is so crisp and clear that I can easily discern the opposing antennae of both the Israeli and the Syrian bases, as they face each other in a perpetual, belligerent standoff.

From its stately summit, the Hermon surveys the Hula valley and the plains of the Golan. Silent. Vigilant. What stories it could tell!

On Monday, we decided to tour the Golan, but this was a tour with a difference. Our aim was to visit and stop at every memorial and monument we came across as we traversed its length and breadth, remembering the fallen, and learning their stories.

But first, we decided to visit the memorial for those who perished in the Helicopter disaster. On February 4, 1997, at 18.48, two Yasur helicopters carrying soldiers to Lebanon collided and crashed to the ground. In an instant, the burning lights of 73 lives were doused. 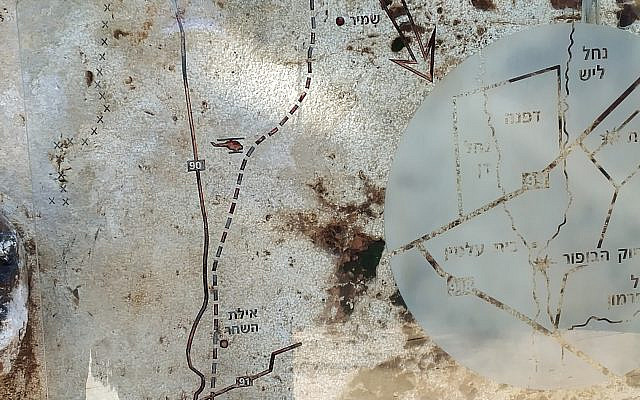 How the Helicopter Disaster happened. (Own image).

I didn’t know what to expect. I can say now that this is one of the most impressive memorials I have ever visited. It isn’t just one monument, but a series of stations. On the memorial rock, plaques of engraved glass tell the tragic story. The glass seems to emphasize how fragile our lives are, while the rock is a sign of permanence, of eternal remembrance. The path then takes you to a glade with a stream flowing through it. At once, you are taken by the quiet and serenity of the glade. Hanging from the branches are marble slabs with the names of the fallen etched on each plaque, adorned with personal memorabilia. The beautiful poem by the branches left me with a lump in my throat. The path then takes you to a circular pool with their names engraved on submerged, black marble tiles. The pool is placed at the center of a rock garden – 73 rocks planted on a lush lawn. each rock signifying one of the fallen, giving an impression of bodies strewn in the wreckage, but now at peace. I found myself not wanting to break the sanctity of the silence. It was hard to leave, it was hard to stay. 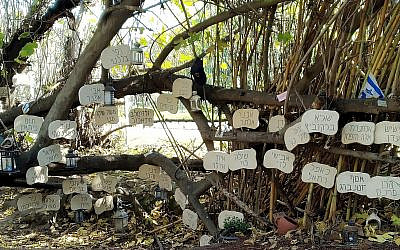 The glade (Own image) 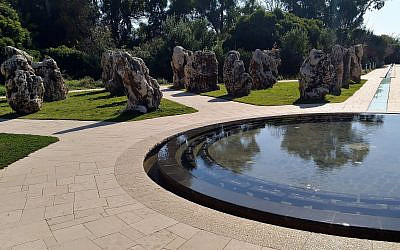 The pool and the rock (Own image) 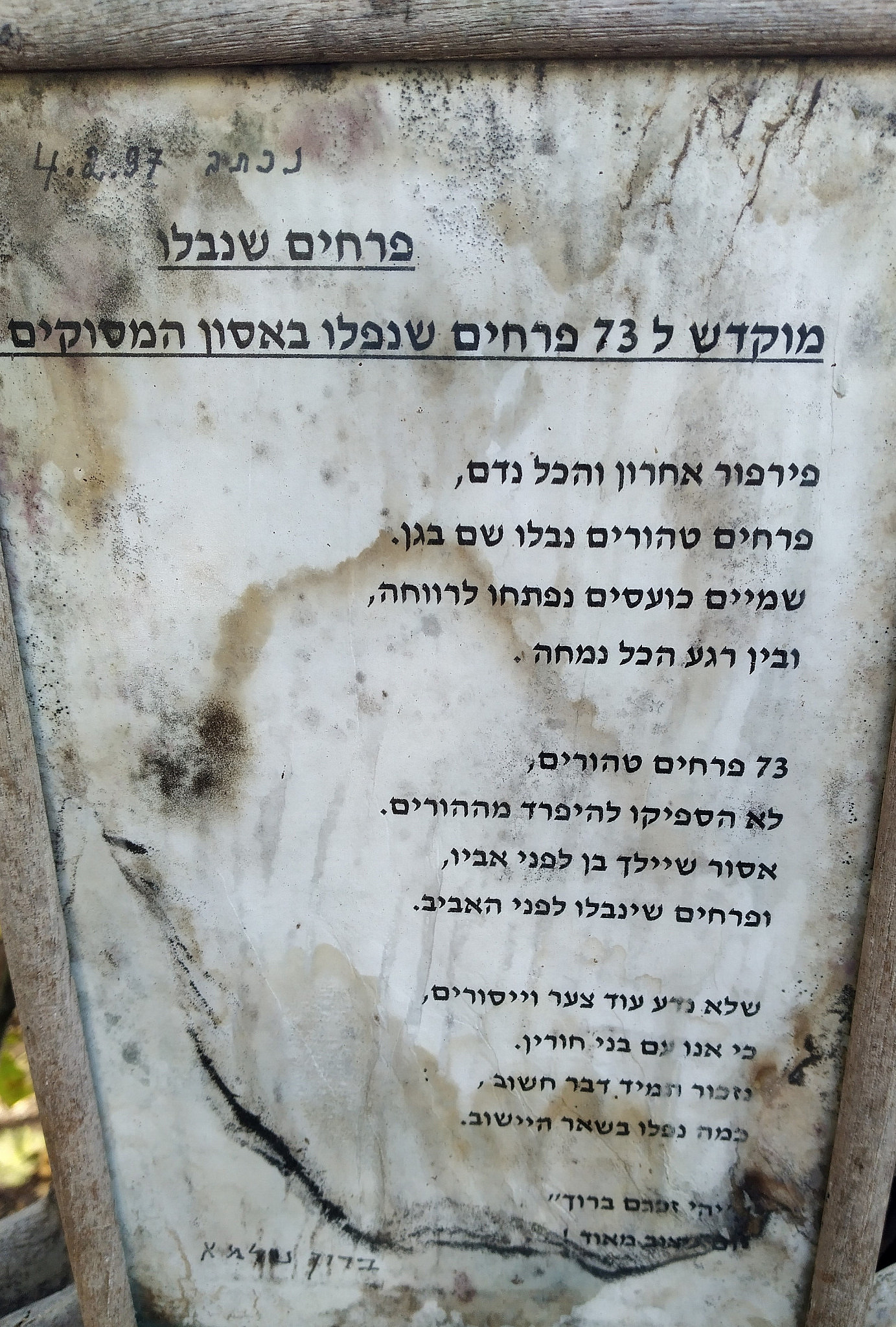 A very moving poem (Own image)

Ascending to the Golan, I was taken by how lush and green it is at this time of year. For fifteen years, as a reservist, a liaison officer, I would drive my jeep the length of the Golan, passing these monuments along the way. And I would always make a point of stopping at one or two for a few minutes, to pay my respects. But I always had somewhere to be, so my stops were short. They always left me wanting to stay longer. Today, we had time.

We first came upon the monument to the bravery of the soldiers of the 7th Armored battalion. The 7th boasts a long and rich history, dating back to the War of Independence. But it is in times of adversity that the true mettle of the 7th was tested. And for me, its conduct in the Yom Kippur War raised its legacy to legendary status. The simple monument displays the names of soldiers of their scout unit, who were killed in one tragic day.  The other is in memory of those who perished in their tanks. They are both a testament to the 7th’s proud heritage. No frills attached. 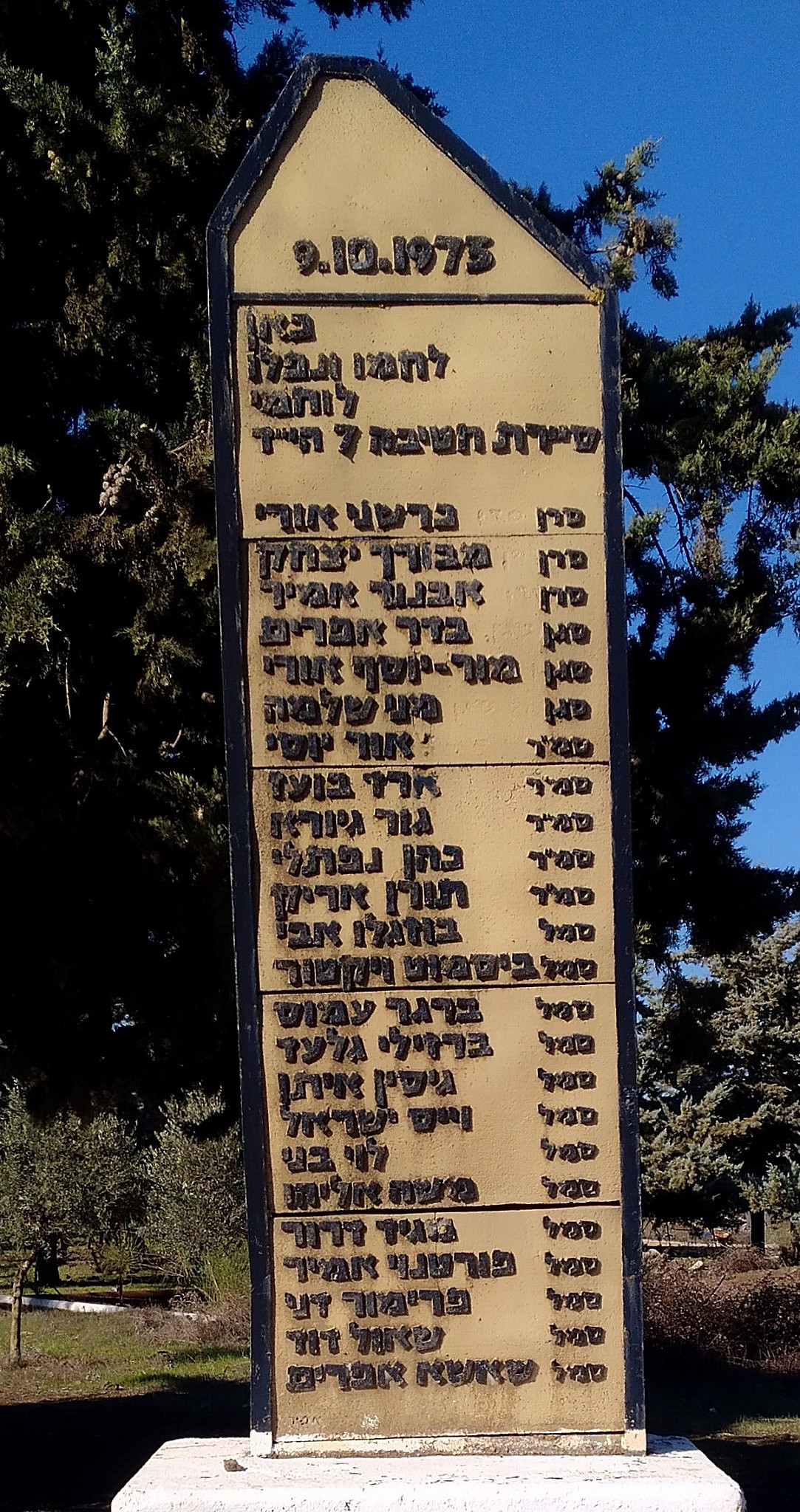 The next stop was the Valley of the Tears. It’s one thing reading about this epic battle. But it’s another thing entirely to stand on the edge of the memorial and look out over the valley, as it spreads as far as the eye can see, while you imagine the soldiers watching the relentless advance of hundreds of Syrian tanks racing towards you, through a cloud of dust. And you look around at your meager force of barely 100 workable tanks, and you know that you MUST stop them because if you fail, the whole of the North will be overrun. Only when you see that with your own eyes can you truly appreciate the daunting task they faced and the courage it took not to flinch. 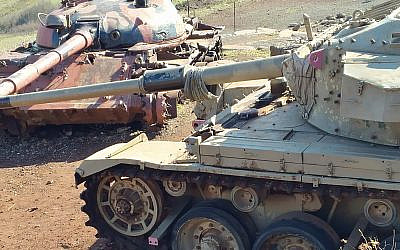 The Syrian T52 and the Israeli Centurion. Valley of the Tears. (Own image) 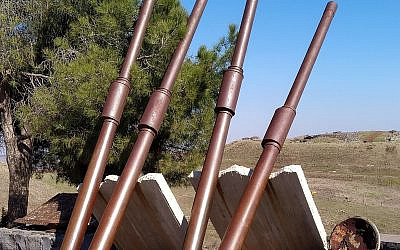 Valley of the Tears (Own image)

As we passed by the ruins of the Hushniya forest, we saw two signs. They list the names of the tank company under the command of Lt. Col Yaakov Nuefels with a special dedication to Captain Moshe Nir of the 95th Tank Brigade. It tells the story of how the tank company under their command was hit by withering Syrian tank fire during the IDF counter-attack on October 10th, 1973. Neufeld, Nir, and nine of his soldiers were killed. I stood before this simple, humble dedication for many long minutes. I don’t know why, but I felt a connection to this site, maybe because it looks so bereft, in the middle of nowhere. 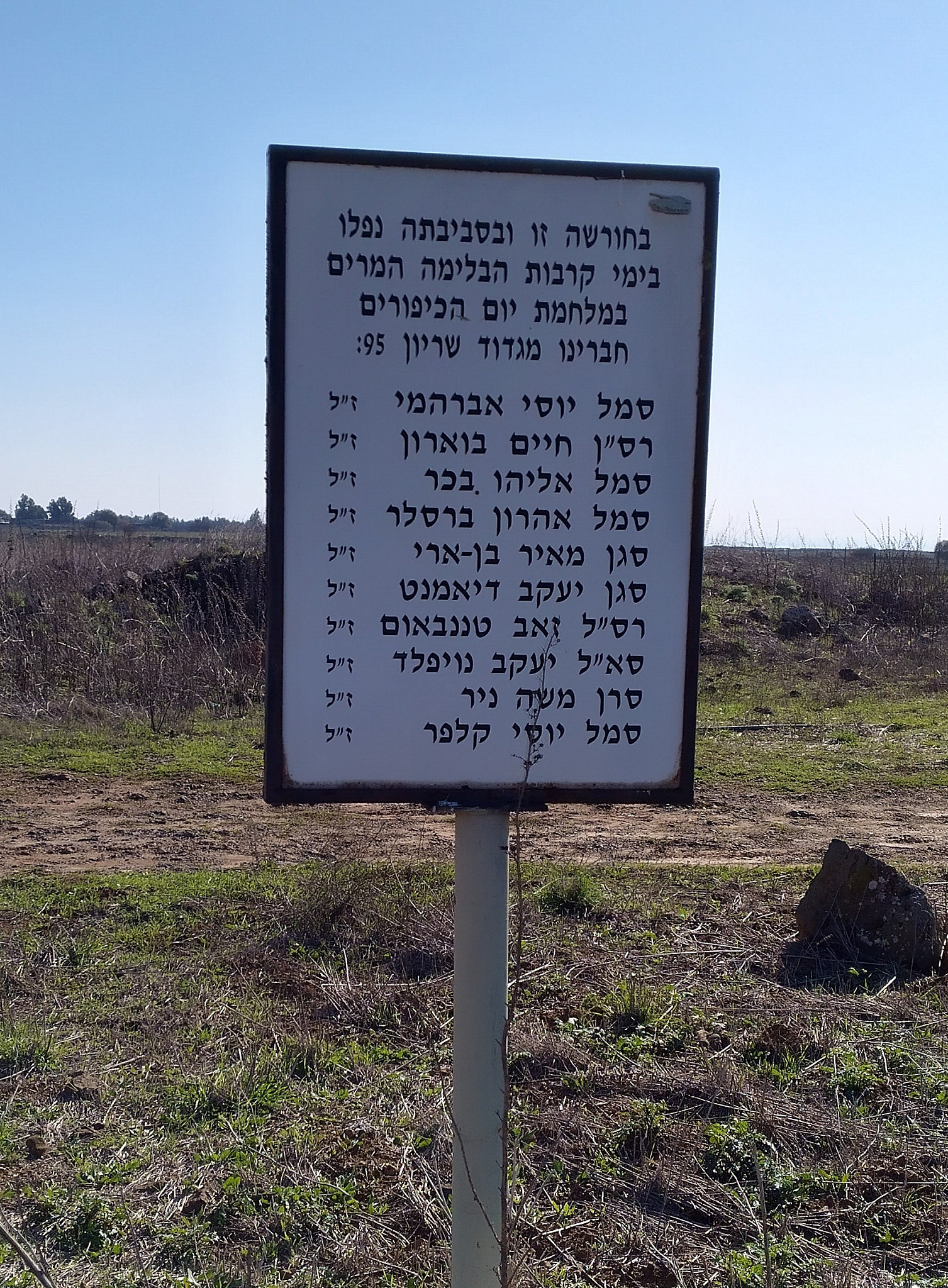 Remembering the fallen of the 95th Brigade. A lonely, solemn plaque. (Own image).

Further along, we came by the familiar monument to the 71st Brigade of the 188th “Barak” Armored Battalion. The brigade was hastily formed, thrown together from soldiers still in the tank training course and their instructors, and unaffiliated soldiers in the Officer’s course, on 5th October 1973, the day before the war started.  They had barely 30 tanks at their disposal when war broke out the next day, against the unstoppable Syrian juggernaut of 700 tanks. Their sole task was to delay the advance until reinforcements could arrive. They lasted three days after which they had lost so many casualties that the brigade ceased to exist.  Its brigade moniker was later given to a unit of volunteers arriving from overseas. Looking at the broken parts and the bristling, porcupine array of tank barrels, I felt the selfless sacrifice of these men, thrown into battle with less than one day’s notice. 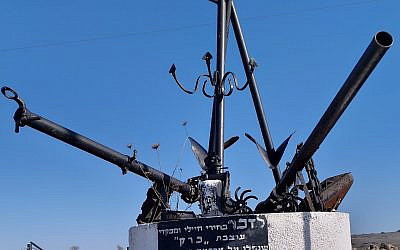 Memorial to the hastily assembled 71st Brigade. Formed on October 5th. By October 8th it no longer existed. (Own image)

As we passed Tel Fares, I was surprised to see a sign to a memorial I had never seen before. We traveled down an uneven, dirt path and came to a small rock garden under a clump of Port Jackson trees. Not a soul in sight, isolated, two granite rocks stand in the center. To the side stands an obelisk with an upturned helmet that simply says “Brigade 405. We will remember”. Brigade 405 was an artillery brigade. For two days solid, the artillery battery of this brigade fired non-stop to provide a defensive screen for our forces to retreat and reorganize. Here’s the moving part: The unit’s HQ staff- the clerks and cooks – although untrained, tirelessly carried shells from one artillery gun to another, so that the guns didn’t have to stop firing to reload. Their commitment was so exemplary that they earned a special mention. Artillery batteries are usually placed behind the front lines, but with the Syrian advance, 405 found itself coming under fire from Syrian tanks. And despite this, they never ceased fire and refused to fall back, refusing to abandon the frontline forces. Fifteen soldiers of the battery lost their lives that day. 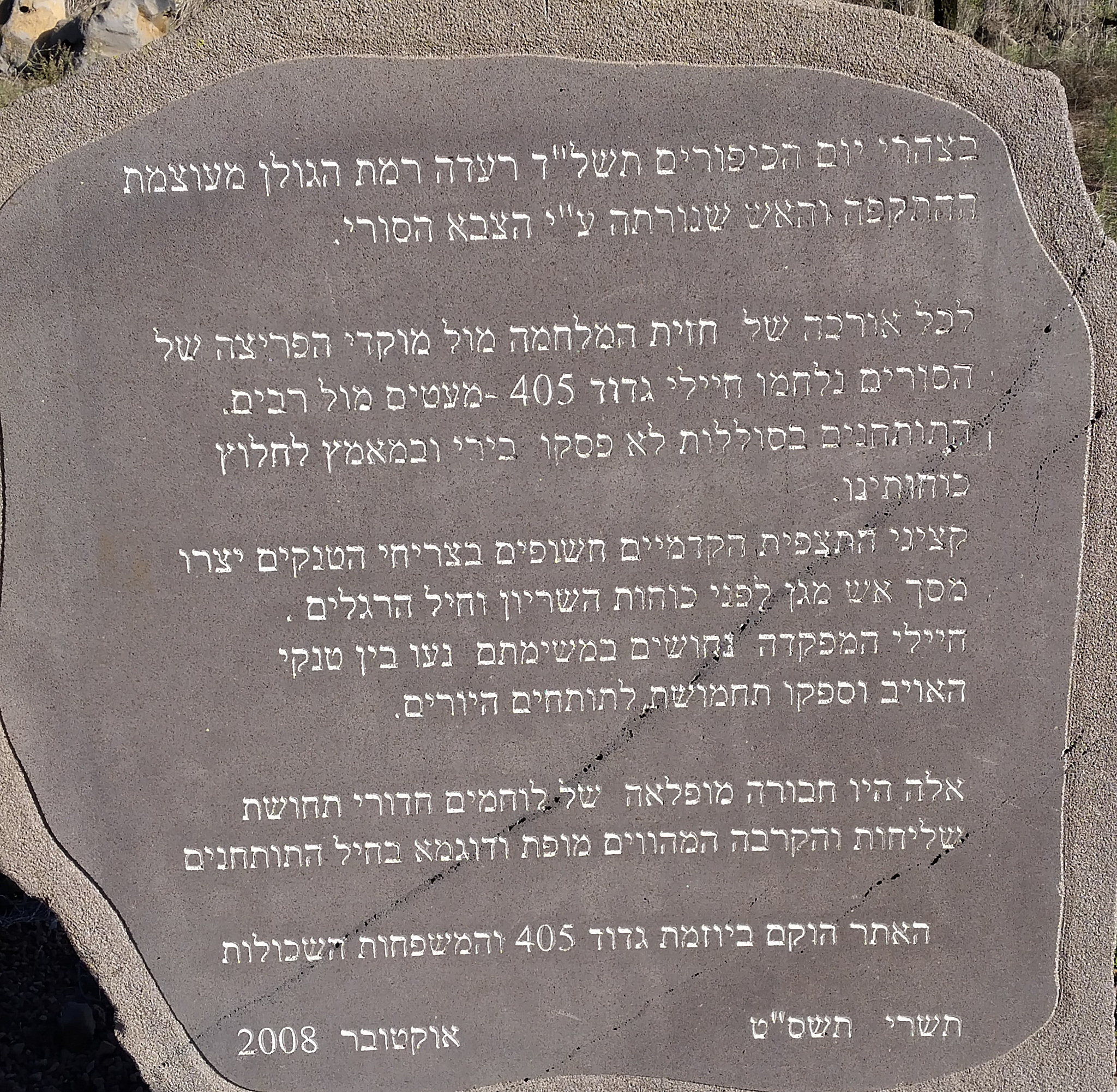 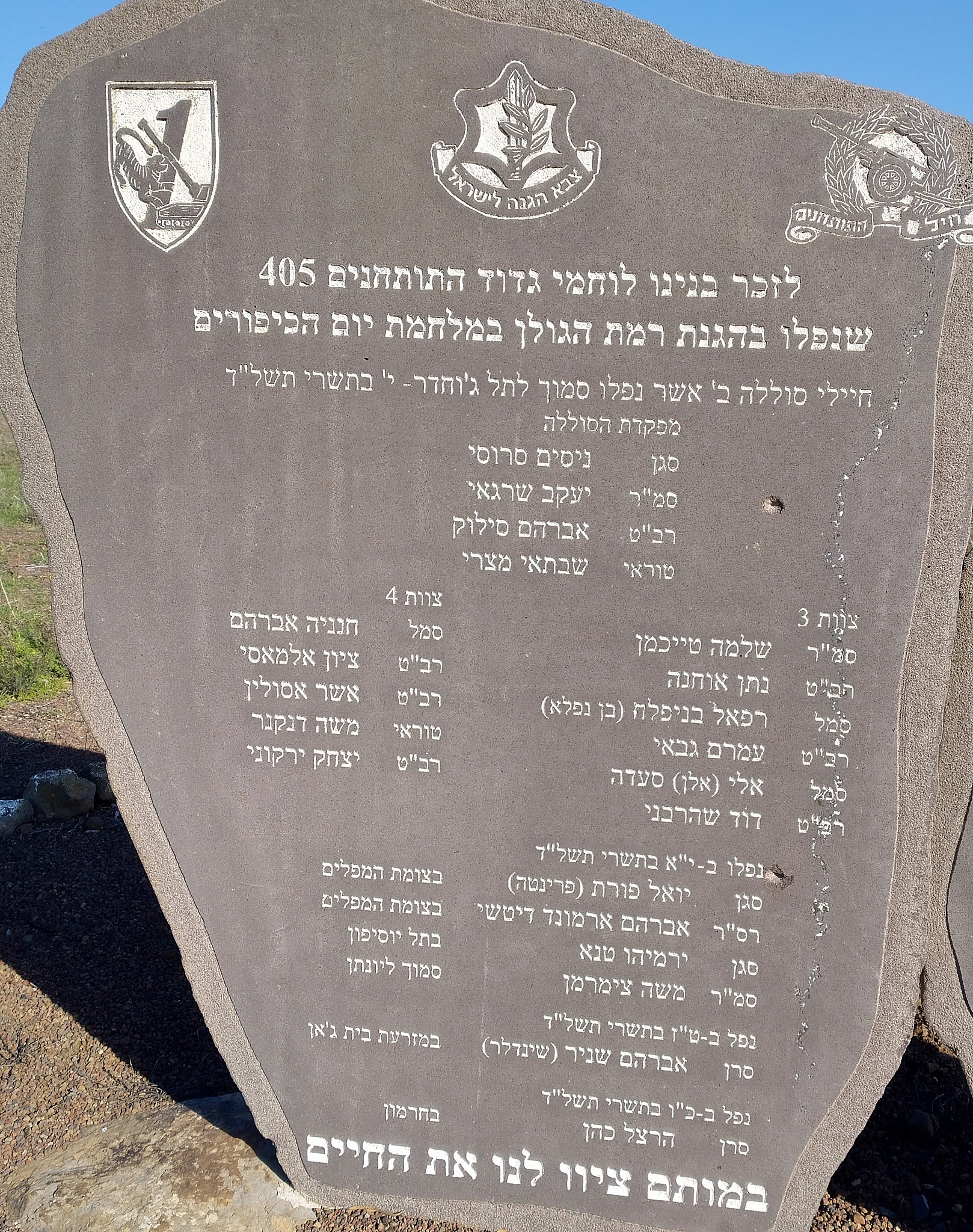 The day done, we started driving back, and we came across a solitary mangled jeep on the side of the road, with no dedication except for the names of the two soldiers who had been in it.  It looked so lonely, an orphan monument, I thought. So, when I got home, I looked up their names. To my amazement, Lt. Yoel Porat was the adjutant for Brigade 405 who was killed leading a convoy of artillery shells to replenish the battery’s arsenal! How is that for a coincidence? 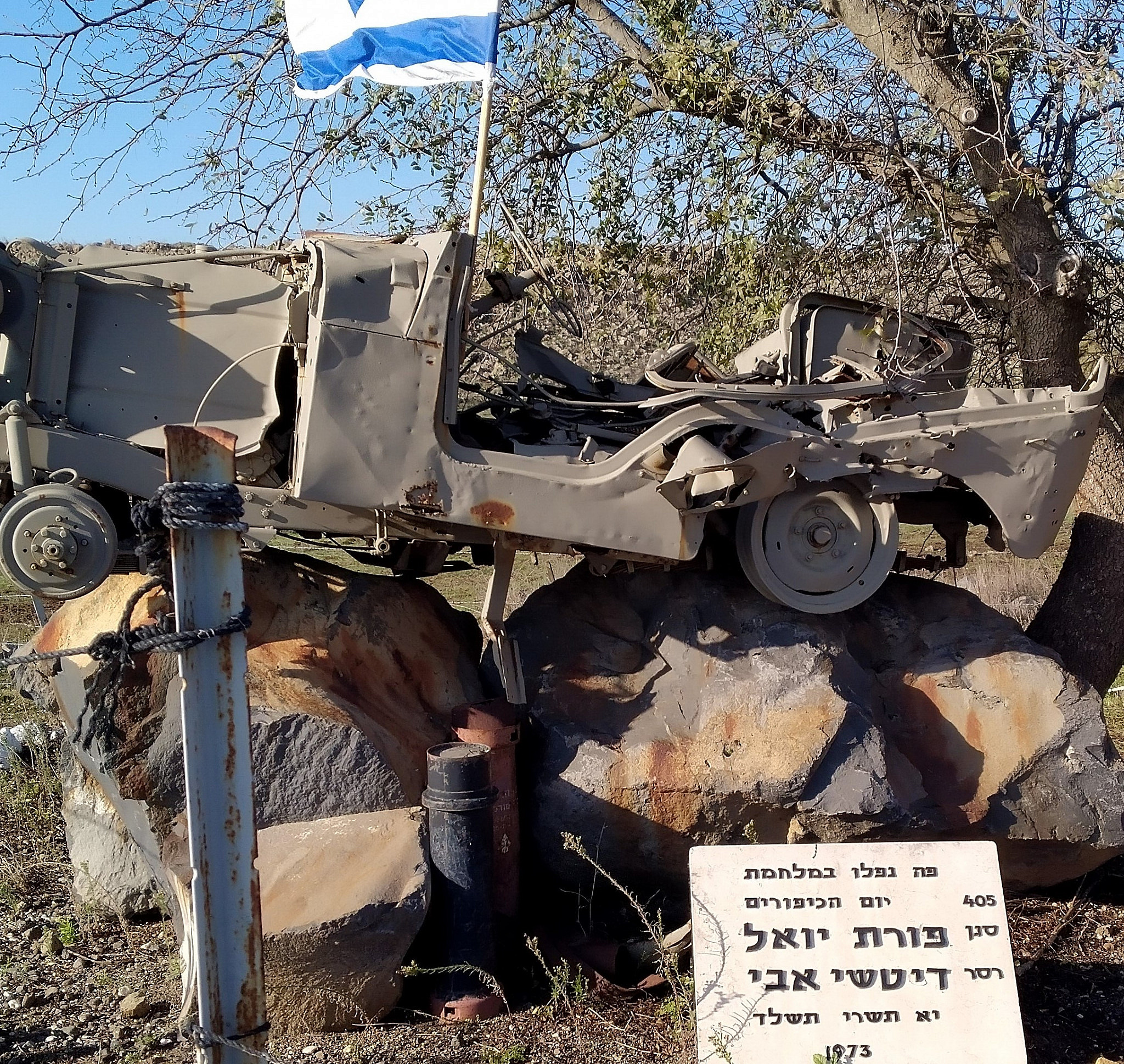 A lonely, mangled jeep – and the surprise coincidence. (Own image).

What a meaningful day! After visiting these monuments, one after the other, I could feel the desperation and urgency these soldiers must have felt in facing the Syrian onslaught. With the knowledge that only they stood between the tidal wave of the Syrian army and the threat of the north of Israel being overrun, these iconic heroes didn’t need to be ordered to do what they did; they knew what was required of them.

The Yom Kippur War was won, not by brilliant strategists, but by the grit, courage, resourcefulness, and sacrifice of these young men. This is what it means to lead by example.

“In their death, they bequeathed us life” feels so much more than a pithy epitaph today.