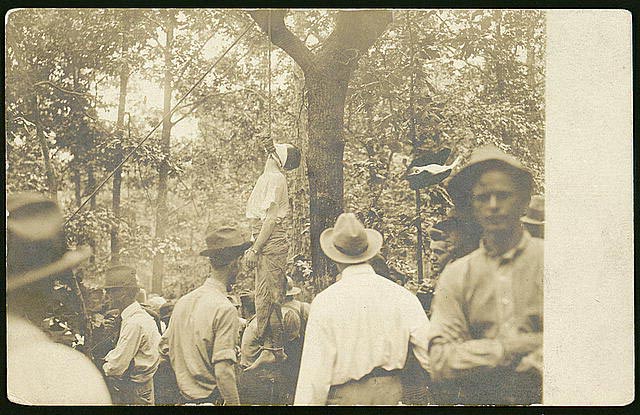 Leo Frank was born in Brooklyn, New York, in 1884. He was the son of immigrant German Jewish parents. After graduating from university, in 1908 Frank found employment managing a pencil factory in Atlanta, Georgia.

Shortly after moving to Atlanta, Frank met and married Lucile Selig. He became involved in the Jewish community of Atlanta, the largest Jewish community in the American south at the time. Frank also served as president of the Atlanta chapter of the B’nai B’rith organization for a term.

On April 27, 1913, the body of a female employee at the pencil factory was found. Her name was Mary Phagan and she was 13 years old. She had been murdered and notes written by the killer were found by her body.

There were three suspects at the factory the night the body was found. Leo Frank, the Jewish manager, Jim Conley, a black janitor, and Newt Lee, a white night watchman. Newt Lee, who had called police about the body was quickly cleared of suspicion. Conley later told police that Frank had murdered Mary Phagan and forced him to help move her body and write the notes. Frank was arrested and Conley became the prosecution’s star witness.

The trial of Leo Frank attracted national media attention. The prosecution was led by Hugh Dorsey, solicitor general of the state of Georgia. Dorsey presented Leo Frank to the southern jury as a Jew, a northern Yankee, and an industrialist. Dorsey suggested Frank was a homosexual who also preyed on young girls. As for the notes that Conley admitted writing, Dorsey claimed the handwriting was too neat for a black man and must have been done by the university educated Jew.

Frank’s defense attorney tried to pin the blame on Conley, saying that Conley was arrested after he was spotted washing blood off his shirt. Frank’s housekeeper also testified that Frank was at home having lunch that afternoon at the time the murder took place.

Following the trial, Frank was convicted of murder and sentenced to death by hanging. He launched 13 appeals to overturn his conviction but all failed, including one to the U.S. Supreme Court. Interestingly, during the appeals, the trial judge of the Frank case urged leniency for Frank.

Georgia governor John Slaton eventually intervened. Slaton concluded there was enough reasonable doubt in the case to commute Frank’s sentence from death to life imprisonment. Large violent protests against the governor’s decision followed. Slaton and his family were forced to flee Georgia for their own safety. Incidentally, Frank prosecutor Hugh Dorsey became governor of Georgia a few years later.

Shortly after the governor’s decision, on August 17, 1915, a group of men, some of them wealthy and well known citizens, stormed the prison where Leo Frank was held and took him away. They drove him by car, which few people had in those days, about 100 miles to Marietta, Georgia. That was Mary Phagan’s hometown. Frank was strung up and hanged from a tree. Photographs of the mob and the hanging were taken, such as the one above.

Leo Frank received a posthumous pardon in 1986 on the grounds that his killing deprived Frank of any right to further appeal.  No one was ever charged for his lynching. Some of Mary Phagan’s descendants still maintain Frank was guilty.  Based on events around Leo Frank, B’nai B’rith created the Anti-Defamation League to combat anti-Semitism and racism.