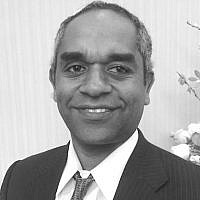 The Blogs
Shmuel Legesse
Apply for a Blog
Advertisement
Please note that the posts on The Blogs are contributed by third parties. The opinions, facts and any media content in them are presented solely by the authors, and neither The Times of Israel nor its partners assume any responsibility for them. Please contact us in case of abuse. In case of abuse,
Report this post.

In the course of human history, citizens of the world and their leaders and governments have accomplished much good by creating international organizations for peaceful negotiation among peoples and nations.  In the early 20th century, much of the free world banded together to form the League of Nations, which failed to accomplish its mission after merely a few years of existence.  In our era, the United Nations was founded to “maintain international peace and security,” per its charter.  Other aims mentioned there include “develop[ing] friendly relations among nations” and “achiev[ing] international co-operation in solving international problems of an economic, social, cultural, or humanitarian character.”

The UN has tried to accomplish this mission through its different departments and agencies.  But our world is still devastated by war, terror, and extreme human rights abuses at the hands of corrupt governments that usurp the power of their own people.  The UN has failed to stand by its charter and fulfill its purpose of protecting these world citizens from cruel regimes and criminal rulers.  Sadly, there are numerous examples of the UN’s failures, from Rwanda to Syria, from Yemen to Ethiopia, and beyond, where efforts to combat ethnic cleansing and address other humanitarian crises were too often too little, too late.

Towards the end of last year, the UN appointed Saudi Arabia to a three-year term on its Human Rights Council, despite this nation’s having one of the world’s worst human rights records, especially with respect to the rights of women, who are prohibited there from driving, opening bank accounts, working, traveling, or going to school without the express permission of a male guardian.  At the same time, as a member of the HRC, Saudi Arabia is charged with fighting for and safeguarding the rights of women.  How can this be?

Last month, the UN World Health Organization elected the Ethiopian candidate Tedrows Adhno as its general director.  This is the same man who concurrently held a ministerial position within the Ethiopian TPLF party that is directly responsible for ethnic cleansing and genocide there.  The same one whom Human Rights Watch has designated as a war criminal, while other international leaders have condemned his inhumane practices.  Again, the dissonance is astounding.

Last week, the UN Human Rights Council laid partial blame on Israel for domestic violence perpetrated by Palestinian men.  This is but one of countless times that the UN has allowed itself to be distracted by its irrational zeal to target Israel, while millions of innocents are murdered in surrounding nations with far less censure or opposition.  Meanwhile, the UN has remained largely silent about the incessant rain of missiles from the Palestinian region of Gaza onto Israeli schools, homes, and hospitals.

These are clear signs that the UN is not adhering to its charter or pursuing its stated mission, that it is failing more profoundly than the defunct League of Nations did in its day.  The time has come for the UN, too, to disband and, perhaps, to rebuild from the ground up, in a whole new configuration.  This is not to say that all member countries would need to be beyond reproach, with flawless records.  But they would need to commit to refraining from active, avoidable human rights abuses, and to calling out other nations engaging in such, bringing them to justice.

There is a baseless accusation that continues to circulate within the UN against Israel as an Apartheid regime.  As an African man and an Ethiopian Israeli, I would like to state the truth for all those who know it or don’t: that Israel is not an Apartheid regime, but rather, the most upstanding democracy and champion of human rights in its entire region.

As a citizen who has personally served the nation through professional work in its public sector, I can testify that the safety measures employed to protect the people of Israel from the open hatred of its hostile neighbors do not constitute Apartheid policies.  Israel’s poor diplomatic reputation stems more from the vociferousness of its enemies than from its own behavior.  And yet, the persistence of the Apartheid canard does call for Israel to take a new look at its standing within the international community and to consider how it might rehabilitate its image.  Israel needs to devise a different strategy or approach towards showing the world its democratic, progressive bona fides.

An initial step in this direction might be for the Israeli foreign affairs office to employ its own citizens of Ethiopian origin who are qualified to represent Israel abroad.  How differently might other members of the UN begin to relate to Israel if its delegation were a more accurate, diverse representation of that nation’s people, who are not by any means homogeneous racially or ethnically.  As intent as the UN appears to be on demonizing Israel, even as so many other countries routinely defy its pacific agenda, international community members could not help but notice and heed the meaning of a racially and ethnically diverse panel of diplomats from Israel, if Israel were to assemble and disseminate one.

Israel must know that, in dealing with the UN, it is dealing with a deeply flawed, indeed an essentially failing organization.  To whatever extent Israel wishes to continue engaging diplomatically within that forum—and, of course, unfortunately, it has not much real choice in the matter if it is to retain any shred of good will from the world—Israel must keep up and extend its efforts to show its people’s true colors, literally and figuratively.

About the Author
Shmuel Legesse is a social activist and a passionate advocate for social justice and political emancipation on behalf of the Ethiopian Jewish community/ all human, who has represented Israel's Knesset in international public affairs and served in the Israeli police force. He holds a master's degree in Community Leadership and Philanthropy from Hebrew University and is currently pursuing a doctorate in Educational Leadership and Administration while studying for Rabbinic ordination.
Comments