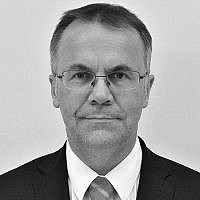 The Blogs
Jaroslaw Sellin
Deputy Minister of Culture, National Heritage and Sport of The Republic of Poland
Apply for a Blog
Please note that the posts on The Blogs are contributed by third parties. The opinions, facts and any media content in them are presented solely by the authors, and neither The Times of Israel nor its partners assume any responsibility for them. Please contact us in case of abuse. In case of abuse,
Report this post. 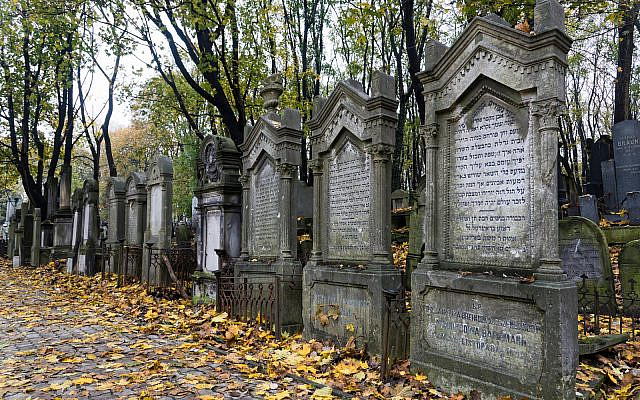 Old graves at the Jewish cemetery, one of the largest Jewish cemeteries in Europe, on October 22, 2017, in Warsaw, Poland. (iStock)

Following the interview with Krzysztof Bielawski conducted by Matt Lebovic and published by The Times of Israel on March 5, 2021, I would like, as the deputy minister of Culture, National Heritage, and Sport of the Republic of Poland in charge of, inter alia, the remembrance policy, to take the opportunity to comment on the statements raised in the interview.

The poor condition of a number of abandoned cemeteries in Poland, including Jewish cemeteries, is undeniable, as is the fact that they were often destroyed deliberately during the Communist era. Ultimately, however, the primary cause of this situation was World War II, the German occupation of Poland, and the resulting absence of caretakers, i.e., the Jewish population organized into communities, as well as the systemic negligence of the Communist regime. First of all, however — and let me emphasize it once again — this is the result of the German genocide, the Shoah, the Holocaust. And the subsequent actions of the undemocratic Communist state that enslaved Poland and its citizens for almost half a century.

The attempt to calculate how many Poles were involved in the destruction of Jewish cemeteries seems to be no more than an attempt to seek undesirable and superfluous sensationalism – as it is based on data that are, in principle, impossible to verify. Nor does it take into account the fact that for almost 50 years these Poles were not free, they could not decide about their fate, they were subjects of Communist tyranny. It was an anti-democratic totalitarian state that took away people’s freedom, controlled every facet of socioeconomic and cultural life, and was responsible for all the evil and negligence perpetrated on its territory.

Likewise, it is pointless to compare those responsible for destruction with the equally difficult-to-determine number of Poles involved in care and protection of cemeteries, though in the past 30 years, the latter numbers have been growing rapidly.

In 1989, when Poland rejoined the family of independent and democratic nations, the priority was to rebuild an economy devastated by decades of economic subordination to the Soviet Union. Unfortunately, in many instances, these priorities adversely affected historic sites that were lacking adequate funding. Even today, while Poland is among the fastest-growing economies in Europe, local governments struggle with the problem of unkempt, abandoned cemeteries. There are municipalities in which more than half of the municipal cemeteries are historic graveyards, where no burials have been held for several decades. Numerous local communities find it beyond their organizational and financial capacity to clean up and maintain these sites.

The state-funded monument restoration programs are therefore of utmost importance. These enable local governments to apply for funds for the renovation of historic burial sites. Under the Act of 20 February 1997 on Relations Between the State and Jewish Religious Communities in the Republic of Poland, communities were able to restore cemeteries that had been seized by the Communist authorities after the war. To this end, a dedicated organization, the Foundation for the Preservation of Jewish Heritage in Poland, was established, which, together with the reinstalled Jewish communities, is responsible for the maintenance of the restituted Jewish cemeteries.

Another important issue is the question of ownership. According to Polish law, the real estate owner is responsible for its condition. This means that if a Jewish cemetery belongs to a Jewish community, the latter is obliged to bear the costs of its maintenance. Obviously, the 10 existing Jewish communities in Poland located in large cities are not able to manage more than 1,200 cemeteries. In many cases, their role must be taken over by the local government, community or organizations.

Even under the Communist regime in Poland, numerous Jewish cemeteries had their voluntary caretakers; nowadays this role is, in many cases, carried out by their descendants. In the collection gathered by the outstanding, recently deceased specialist Jan Jagielski, co-founder of the Social Committee for the Protection of Jewish Cemeteries and Monuments in Poland and head of the Heritage Documentation Department at the national Jewish Historical Institute in Warsaw, there is extensive correspondence containing requests and prompts addressed to the authorities at the time to take care of deteriorating Jewish necropolises.

The Law and Justice government, in power since 2015, has substantially enhanced and extended the care of Jewish heritage sites and Jewish cemeteries. It has already allocated more than PLN 350 million (about NIS 300 million) over this period to institutions that care for the memory, culture and heritage of Polish Jews, as well as the commemoration of the Holocaust. Never before has funding been so ambitious!

Regarding cemeteries, the decision to earmark PLN 100 million (about NIS 80 million) for the protection of the cemetery located at Okopowa street in Warsaw, which is the second-largest Jewish cemetery in Europe after the one in Berlin, was a real breakthrough. Just three years after this decision, the cemetery, which is spread over 36 hectares and had been overgrown with trees and neglected despite the efforts of committed volunteer caretakers, has now changed beyond recognition. It was restored and provided with regular, continuous care along with adequate funding, a first in post-war history.

In addition, all major sites of German mass extermination of Jews on Polish territory: Auschwitz-Birkenau, Bełżec, Treblinka, Sobibór, Kulmhof am Ner, which are at the same time the biggest Jewish cemeteries, are under direct protection of the Polish state. Over the past few years, this protection has been significantly intensified, due, inter alia, to numerous investments. We completed the construction of the Museum and Memorial in Sobibór, we built the Center for Education about Auschwitz and the Holocaust at the Auschwitz-Birkenau Museum, while granting the status of State Museum-Memorial Site to Treblinka. Each year, significant funds from the state budget are allocated to the maintenance of these institutions and centers.

Since 2017, the National Heritage Board of Poland, subordinate to the Ministry of Culture, National Heritage and Sport, has been conducting the initiative of marking cemeteries, while local inspectors of monuments spare no effort to include them in the register of historical monuments. In line with the position of the Polish Ministry of Culture, National Heritage and Sport, as set forth by the General Inspector of Monuments of Poland in a letter of July 31, 2017, circulated to provincial inspectors of monuments, “As burial sites, Jewish cemeteries in our country have historic value. Added to this is an intangible value stemming from the sacred status and religious sentiments, as well as a historic one — cemeteries are a tangible record and a reminder of the presence of the Jewish community in Poland, and at the same time, they carry the memory of the multinational and multi-religious tradition of the First and the Second Polish State… Proper and due care of Jewish cemeteries is one of the elements of maintaining the continuity of the Polish state… The undisputed historical value of Jewish cemeteries as burial sites results directly from the presence of human remains. The burial zone is the intrinsic area within the cemetery; the degree of preservation of architectural structures is of secondary relevance, although important for deciding on the proper method of protection…”

With this guideline, each of the more than 1,200 Jewish cemeteries in Poland, regardless of whether or not gravestones have been preserved, is currently under the legal protection of the Polish state. This is in keeping with traditional Jewish sensibility, where the peace of a buried person is more important than the appearance and condition of the gravestone. This means that from now on every Jewish cemetery in Poland is protected under Polish law as a historical monument. In order to properly mark these cemeteries, a dedicated information board template was designed. Each of these boards features a QR code linking to a website, where one can find information about a given cemetery in three languages: Polish, English and Hebrew. In December 2018, the Deputy Minister of Culture and National Heritage signed an agreement with the Union of Jewish Religious Communities in Poland and the chief rabbi of Poland, concerning the standards for preserving and commemorating Jewish cemeteries.

Alongside the care of Jewish cemeteries and memorial sites, the present government has been pursuing a very comprehensive and unprecedented policy of commemorating Jewish heritage and culture in Poland. For example, following the decision of the mayor of Warsaw, the late Lech Kaczyński, who in 2005 had initiated the construction of the world-renowned POLIN Museum of the History of Polish Jews, current Minister of Culture, National Heritage and Sport, Deputy Prime Minister Prof. Piotr Gliński established in 2018 a new institution, the Warsaw Ghetto Museum housed in the former Bersohn and Bauman Children’s Hospital, at Sienna Street in Warsaw. The tender for the construction of the museum along with the design of a permanent exhibition is currently being finalized. The opening of the Warsaw Ghetto Museum is scheduled to take place in the fourth quarter of 2024.

The Ministry of Culture, National Heritage and Sport supports numerous and diverse cultural projects they consider relevant to the 800-year-old tradition of Jewish culture on Polish territory. Through subordinate public institutions, it co-finances about 40 film productions related to Jewish culture and supports numerous film, music and theatre festivals and meetings. It also carries out activities aimed at the preservation and renovation of Jewish heritage that has survived in the form of films, literature and archives in Poland.

Local initiatives, so numerous in Poland, may also count on support from the Ministry of Culture, National Heritage and Sport. Numerous local organizations and associations take care of the historic cemeteries, occasionally in cooperation with the descendants of Polish Jews living today in Israel, USA or South America. In 2020, the Coalition of Guardians of Jewish Cemeteries in Poland was launched as a first attempt to coordinate such activities. In fact, Mr. Krzysztof Bielawski is a member of the Coalition’s board. Moreover, the Polish Office of the Commissioner for Human Rights has launched a social initiative called “(Nie)zapomniane cmentarze” [(Un)forgotten Cemeteries], which aims at showing respect for neglected necropolises and promoting actions aiming at their restoration.

We do believe that since Poland was the primary homeland for the Jews in Europe for more than 400 years, and since Jewish cemeteries are often the only trace of the presence of our fellow compatriots after the Holocaust perpetrated by the Germans, these sites must be preserved and taken care of properly. It is of vital importance not only for Jews, but also for local communities, as Polish Jews co-created the history of their city or town, often constituting the majority of its inhabitants. Today, the process of reviving remembrance and reflection on what can be saved of our common heritage in Poland has been expanded and implemented on a scale unprecedented in both quantitative and qualitative terms.

About the Author
Jaroslaw Sellin is the Deputy Minister of Culture, National Heritage and Sport of The Republic of Poland.
Related Topics
Related Posts
Comments