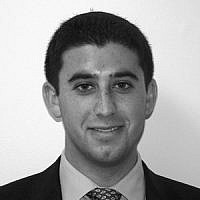 The Blogs
Yossi Raskas
Apply for a Blog
Advertisement
Please note that the posts on The Blogs are contributed by third parties. The opinions, facts and any media content in them are presented solely by the authors, and neither The Times of Israel nor its partners assume any responsibility for them. Please contact us in case of abuse. In case of abuse,
Report this post.

Last week, the U.S. backed down to the terrorist group, Hamas, when it decided to partially close its embassy in Tel Aviv due to incessant rocket fire on Israel.

While kowtowing to terror is consistent with the White House’s strategic military objective – that of ending wars at all costs – abandoning a critical intelligence-sharing outpost in an allied country during a time of war against a mutual threat is unlikely to achieve that intended outcome.

Instead, President Obama should immediately announce the relocating of the U.S. embassy to somewhere safer – Jerusalem.

The move would harden and improve America’s inter-operability with Israel, both on the diplomatic and security front, and thus show – with actions, not just words – that Washington is committed to ensuring Israel’s security and sovereignty. 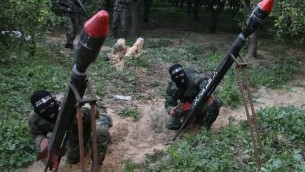 Counter-intelligence sharing and security cooperation between Israel and the U.S. have played a significant role in the Western war against Islamic terror. Both American and Israeli security officials have described the cooperation as being expert level. Of little doubt is that the cooperation is mutually beneficial.

President Obama has expressed and upheld his continued support for Israel’s inherent right to self-defense. In a recent conversation with Israeli Prime Minister Benjamin Netanyahu, the president reaffirmed Israel’s right to defend itself against Hamas rocket fire.

Unfortunately, many media reports and human rights groups dismiss the Gaza rocket threat, especially the Qassam, as mainly a symbolic weapon, not a serious threat. They downplay the dangers posed by these rockets and cite the low fatality rate and imprecision of the rockets as supposed proof of their claim.

Of course, none of these rockets can be reliably aimed. Qassams are cheap pipes with no guidance system. That’s precisely what makes them terrorist weapons, not military weapons. Indeed, the only way a Qassam can be effective is to aim it at a nearby, immobile target that is poorly defended – for instance,  a schoolyard filled with children or an embassy building staffed with white collar diplomats.

To date, the White House has failed to acknowledge any direct linkage between the current conflagration with Hamas and Iran’s hand in Gaza, despite Israel’s interdiction in March of a Panamanian-flagged ship, the Klos C, off the Sudanese coast in the Red Sea. The ship’s cargo contained, among other things, 40 M-302 surface-to-surface rockets – the same weapon that Hamas recently boasted it specifically managed to fire at Israel.

That’s unfortunate, because Iranian leaders seek to annihilate Israel and the United States, and they have explicitly stated that having a nuclear weapon is essential for carrying out that cause. In addition to being a strategic threat to Israel, the Iranian weapons pipeline to Gaza underscores the tactical nature of that threat as well.

Considering Iran’s role in supporting Hamas in Gaza, now is precisely the time for the U.S. to expand its military and security cooperation with Israel, not limit it.

Thus, given the apparent danger of manning a fully functioning embassy in Tel Aviv, the U.S. should immediately relocate its embassy to somewhere safer – Jerusalem.

Doing so would provide a safe haven for the American staff. Moreover, the move would send a clear message, both to Hamas and to Iran, that the U.S. has the will, power, and resolve to counter-act efforts intended to destabilize the region.

Equally, important the shift would show Israelis – with actions, not just words – that the U.S. is committed to ensuring their safety and sovereignty. That’s the correct message.

Even with the correct strategy and tactics in place, defeating radical Islam is a long process, one that will not be achieved overnight. But showing real support for America’s most important ally, Israel, during a time of war against a shared enemy is a good way to start.

About the Author
Mr. Raskas is a combat veteran of the IDF.
Comments