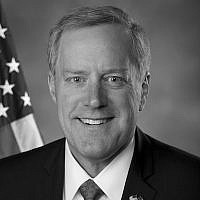 The Blogs
Mark Meadows
Apply for a Blog
Please note that the posts on The Blogs are contributed by third parties. The opinions, facts and any media content in them are presented solely by the authors, and neither The Times of Israel nor its partners assume any responsibility for them. Please contact us in case of abuse. In case of abuse,
Report this post.

The United Nations Human Rights Council (UNHRC) announced that it is launching an “independent” inquiry into Israel’s ‘purported violations of international humanitarian and human rights laws’ in Hamas-controlled areas of Gaza, East Jerusalem and surrounding areas.  In other words: the UN is now investigating Israel’s right to defend itself. The Council has shown no intention of investigating Hamas.This should come as no surprise. Since 2006, the UNHRC has  passed 50 ‘anti-Israel’ resolutions — just shy of the total number of resolutions passed against all other U.N. Member states combined. The UNHRC has made a habit of targeting Israel with inquisitions. In fact, it has such an alarmingly bad record regarding Israel that, during the last Bush Administration, the U.S. didn’t even participate in the Council. However, that changed under the Obama presidency.As the conflict between Israel and Hamas terrorists continues, the number of casualties on each side tragically grows. To the UN’s credit, it issued a statement condemning civilian deaths on both sides of the conflict, but then noted that Israel was responsible for a disproportionately large number of civilian casualties. Additionally, the UNHRC’s statement fails to note that Israel has gone to great lengths to try to avoid such casualties. Meanwhile, Hamas is housing weapons near civilian populations, including in schools and hospitals. Reports also indicate that the terrorist group is knowingly using Palestinian people, including small children, as human shields. Hamas—a U.S. State Department-designated terrorist organization—is responsible for countless assaults on innocent Israeli civilians pre-dating this conflict.With each new day, the pressure for a ceasefire mounts. Israel has agreed to proposed ceasefires, while Hamas has not, yet we still see the UN siding with Hamas. This begs the question: what are their motives? Further, why is the UN so quick to criticize Israel, while ignoring the atrocities committed by Hamas?Let’s first consider Hamas’ end goals for this conflict. If you recall, in November 2012, the United Nations voted to upgrade the Palestinian Authority to ‘non-member observer state.’ This decision came on the heels of an eight-day conflict between Israel and Palestine, when the UN essentially sided with the Palestinians. The message to Hamas was clear: start a war and you will be rewarded for agreeing to end it. It’s no wonder that Hamas is back again, starting a conflict to achieve further gains, with the eventual goal of establishing Palestinian statehood.Palestine today is very different from what it was in 2012 when the UN sided with it. As of May of 2014, the Palestinian Authority has chosen to embrace Hamas leadership, forming the Palestinian unity government.Now, the UN is faced with a complicated dilemma. If the UN condemns the actions of Hamas terrorists and the Palestinian unity government, it will essentially have to admit it was wrong about Palestine in 2012 and has been since 2006. This is a tough, bitter pill to swallow. The UN’s other option is to condemn Israel as the aggressor and avoid weighing in on the newly formed unity government. The UN has made its decision crystal clear.From rocket fire, to suicide bombing, to kidnappings and murders, Hamas militants have terrorized Israeli civilians for decades. But that’s not the narrative we’re hearing in the U.S. or abroad from the mainstream press. Instead, we’re hearing nonstop reports of Israel as the aggressor and seeing images of suffering Palestinians splash across our screens. Rarely do we hear about Israel’s willingness to agree to a ceasefire.There’s been discussion as to whether or not Israel’s response is ‘just.’ To that, I say: at what point does it become just? When have other nations—the United States included—gone to the lengths Israel has to warn civilians before launching attacks? Further, what would any other nation do if it were in Israel’s shoes being bombarded with rockets, missiles and mortars from just across its borders? I can assure you that not a single country would stand idle if terrorists on their borders launched rocket fire at civilians day in and day out. If the UN doesn’t make the right decision by calling off its inquisition, I hope at the very least the UN will look into the full breadth of this conflict— including Hamas’ blatant actions that forced Israel to step up to defend itself. If the UN fails to fully examine both sides of this conflict, it will be guilty of committing a grave injustice itself.I pray for peace. I hope we all do. But until peace comes, I will remain unwavering in my support of Israel’s right to protect herself and her people. I call on my fellow U.S. lawmakers, the President, and Secretary Kerry to do the same.

About the Author
U.S. Congressman Mark Meadows (R-NC) represents the 11th District of North Carolina. Congressman Meadows serves on the House Foreign Affairs Committee and is a congressional delegate to the United Nations.
Comments