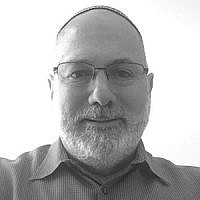 The Blogs
Steven A. Hemmat
Apply for a Blog
Advertisement
Please note that the posts on The Blogs are contributed by third parties. The opinions, facts and any media content in them are presented solely by the authors, and neither The Times of Israel nor its partners assume any responsibility for them. Please contact us in case of abuse. In case of abuse,
Report this post.

Today, the 22nd day of Tevet, marks the seventh Meldatho (Ladino for Askara/Yahrzeit) for my grandmother Gorgieh bat Simcha. She lived a long life. Because birth records were not kept in Baghdad at that time, we estimate that she lived between 102 and 106 years based upon the date of her Ketubah. 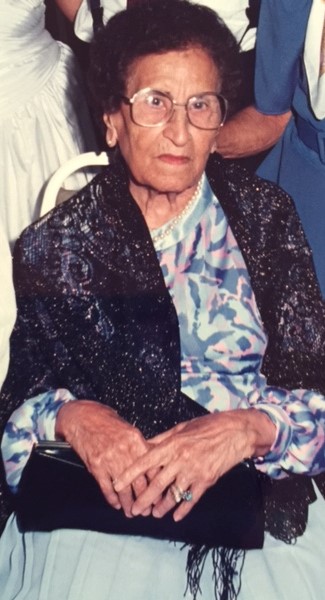 Gorgieh was a remarkable woman not only because of her extended lifespan, but also due to her extraordinary character. She was raised Orthodox in a religious home in Baghdad where the Ben Ish Hai had led the Jewish community. Until her old age, she was able to recite the Haggadah by heart.

Orphaned as a young child in Iraq in the early 20th century, she went to live with her older sister in Iran where she later married my grandfather Soleyman (Shelomo) Hemmat. She gave birth to three children: Houri, Naim and my father Amir Houshang. Tragically, she saw her husband and two of her children pass on.

Both my grandmother and grandfather permanently moved to the United States from Iran in 1978, before the revolution in that country.  My grandmother never fully spoke English. She was fluent in Arabic, Farsi, French and knew some Hebrew. Nevertheless, if she sat down next to a stranger on a bench or bus she would be able to find out much information about her new neighbor’s family even through her limited English.

After my grandfather died in 1980, she lived on her own in an apartment near my father’s pharmacy in a suburb of Seattle.  We would often visit her for a meal, drink tea and to play backgammon. Many years later and after suffering from a stroke, she lived in the Jewish nursing home in Seattle until her passing in January of 2009.

What made her most astonishing was her capacity to find meaning in the ordinary and in doing so, transcend time. Once when my father was a young boy in Iran, as my grandmother was cleaning up my grandfather exclaimed that her care for putting away a child’s whistle was as if she wanted to give it to the young boy’s grandchild. Incredibly, my grandmother saved that simple French-made red and white plastic whistle for over fifty years to give to her first great-grandchild, my son Amir.

My grandmother had a special relationship with Amir.  Our family was blessed to have my grandmother in relatively good health during Amir’s formative years, where she would often spend Shabbat with us at our home.  Rachely and Amir would visit her at her apartment every Tuesday.  Rachely, the daughter of Moroccan immigrants to Israel, spoke Arabic with my grandmother and established a strong bond with her. Shortly after our son was born in 1991, my grandmother gave to our family a special gift that we would not fully realize the meaning until many years later.

This past August we were overjoyed to have celebrated my son Amir’s wedding to his beautiful kallah, Ruthie. 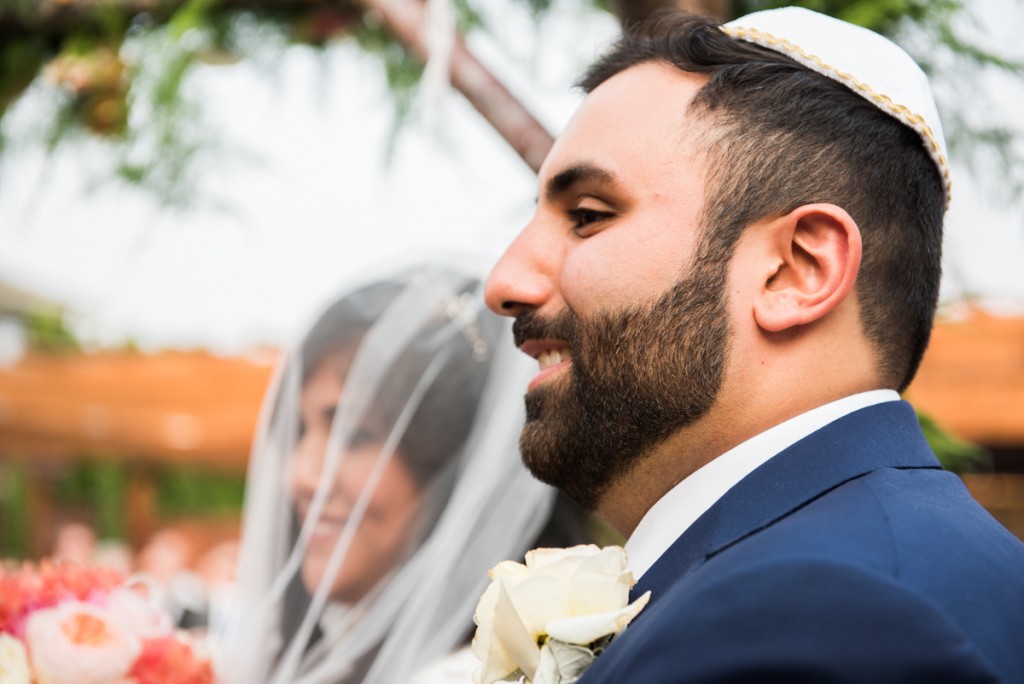 The wedding was held at Congregation Ezra Bessaroth in Seattle, and many friends and family joined us for this simcha.  It was held in the Sephardic Orthodox tradition outdoors under a beautifully decorated rustic wooden chuppah, with Amir’s tallit tied to the top.  The ceremony ended with the traditional breaking of a glass under the chuppah: 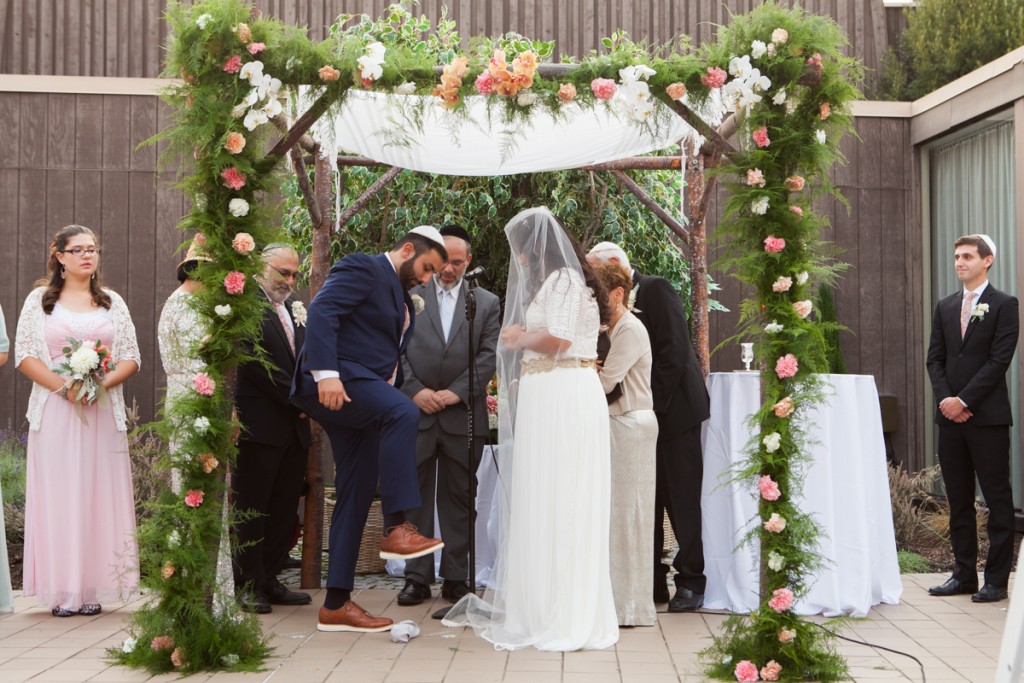 In the afterglow of the wedding the following Shabbat, my wife shared a note with an Iranian-born friend, written in Farsi by my grandmother many years before that we had kept in our china cabinet. She translated the note to reveal that my grandmother had given us her glass tea cup to be used by Amir to break under his chuppah! 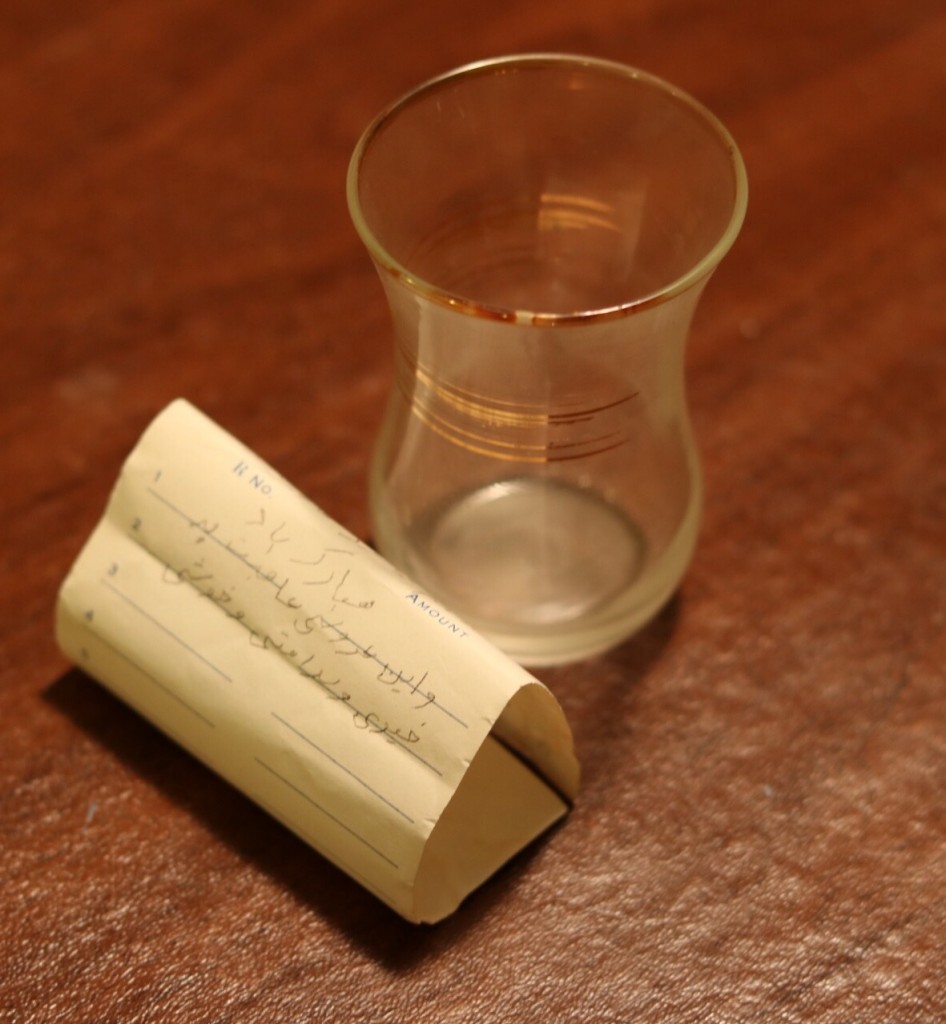 The glass cup and note

The realization that we missed the opportunity to fulfill her desire is outweighed by our appreciation of the foresight and thoughtfulness of an extraordinary woman who valued Jewish tradition, continuity and family. May Gorgieh bat Simcha continue to rest in peace in Gan Eden.