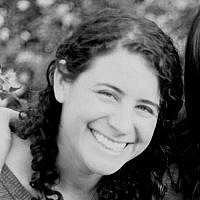 The Blogs
Arella Mayer
Apply for a Blog
Advertisement
Please note that the posts on The Blogs are contributed by third parties. The opinions, facts and any media content in them are presented solely by the authors, and neither The Times of Israel nor its partners assume any responsibility for them. Please contact us in case of abuse. In case of abuse,
Report this post.

A man crosses me in the street, his face bent down so as not to look me in the eye. He holds down his hat, and I can see the angles of his black Bekishe. A simple yet distinguished uniform of black and white sits neatly around his frame. He rushes to his mission and carries orders in his hands, perhaps a Gemara. He holds a clear rank and a clearer destination. He speaks an intimate jargon. It too has abbreviations and inside-jokes, all foreign and cryptic to me.

As envy creeps up, I stand there beside him. I look down at my jeans and can just barely make out the outlines of a uniform that once protected my identity too.

For most Israelis, the day we leave the military feels like the first day of our lives. In truth, it is liberating to live beyond an army. We don’t cower before commanders, or stay up late at night worrying about difficult subordinates. We create our own orders and missions. We carry whatever flag we choose, or camouflage ourselves to fit in. But who are we without a base, a uniform?

The military gave me a gift I had always longed for as a Jewish woman with an Orthodox upbringing: a genderless Jewish uniform. And I miss this gift dearly.

Forgive my harsh words, but growing up in the Orthodox Jewish community felt at times like a spectator sport. At synagogue or communal life events, men played the game in their tailored uniforms and ranks, and the women cheered them on. I feared becoming an observer in an arena that focused on the Talit-clad participants. I wasn’t expected to hold rank or communal responsibility.

But I could never be a bystander in my own religion. That’s like expecting male strangers to take a test for me, or speak to my mother on my behalf. I could never connect to God vicariously through men; I had to have full stake in the game and participate like anyone else. Yet I hadn’t found a way to show this burning need to the world.

In the Orthodox community, women are taught that we don’t need uniforms or reminders of faith like Tzitzit or Tefillin. We are born on a ‘higher spiritual plain’, and are less easily distracted. Beyond strict guidelines for how to cover our bodies, we have no guide for how to express our connection to God through clothing. If we do take on the Talit or traditional male roles, our motivations are often questioned or dismissed as mere imitations of men rather than sincere undertakings.

Well let me tell you, I am not above the need for a uniform. As a woman in the post-modern world, I’ll be the first to admit I am distracted. I am confused by society’s sexual fluidity and self-identity. I am blinded by endless pixels on a screen. I struggle to keep pace with my peers. Now, more than ever, I need the certainty of a uniform. Yet most Jewish uniforms like the Talit or Kippah have been gender-specific.

What the Israeli military uniform represents, however, is beyond gender. I could embrace my identity as a woman while sharing in the Jewish collective. Wearing that uniform was a deep spiritual relief and anchor. Finally, with just a thin layer of cloth, I too carried my small share in our Jewish fate. I rolled my dice like any man before God.

Looking back, I remember throwing on the ammunitions vest over my shoulders and fastening my beret over my gun strap. I tied my hair in a braid beneath my cap and looked in the mirror, discerning ambitious hazel eyes among dry lips and desert-darkened skin.

As I navigated the desert in the cool nights I held a compass in my hand. The stars shone brightly over darkened hills that blended into each other in the distance. Water shifted in my canteens as dry plants contracted beneath my heavy boots. Sweat covered the length of my back, and I shook with every breath. In the army they teach you to complete missions and navigate a blended, chaotic desert. But you don’t see the desert. All you see are memorized  angles, meters, and distances along the path to your destination. You’re not distracted by the dark chaos around you.

“Why do soldiers listen to us?” I once asked a fellow commander at a training course. “I don’t truly hold any force over them. I am a petite American girl, commanding tall, rowdy eighteen-year-old-men. How is this possible?”

“It just is. You don’t need a name. You put on your rank, they put on that uniform, and they listen.” It’s all a game – a game of rank.

Later that week as I walked by a shop the store owner motioned to me, “Chayelet” (“Soldier”) he called out. He did not know me, yet he knew my name.

During my service I didn’t need a name. I had an army. To your soldiers, you are the ultimate compass. They are the blank slate on which you write your commands and ideals. Purpose can be found at your fingertips: as you say Kiddush in a guard post on Friday night or comfort a crying soldier who misses home. But I left that army a couple years back, and have yet to find another. That man, though, walking by me on the street in his Bekishe, may appear confined to a uniform, but in truth he holds a compass. His desert does not distract him; it just fades into a backdrop to his destination.

On late Friday nights in Jerusalem, I stop in my tracks to listen. There is a lively Yeshivah across the street. I stand by the windows and listen to hearts swaying to the late night tune; primal, rich tunes that hold no words. Against the blended desert of just any Friday night, a vessel for meaning is created. Waves of men in black surround a long white table, swaying powerfully together. You see Shabbat for what it could be: bold and intimate. Your chest expands. In that moment your soul returns to a place it had been a long time before. A place your parents, and their parents before them had once been. You have no voice, no uniform. And standing outside that window, that’s the closest you’ll ever get to rank. Yet you burn for a place at that table.  Stately uniforms and defined roles are precisely the cement that holds those late Friday nights together.

Some hold rosaries to grip their faith and others fasten a Talit to contain their identities. We cling to an army because it is far scarier to struggle alone. I find myself navigating a desert again, this time with no compass. Our uniforms–whatever they may be–have value. Cherish them.

About the Author
Arella is a connoisseur of Jewish food (for thought).
Comments