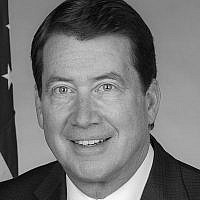 The Blogs
Bill Hagerty
Apply for a Blog
Please note that the posts on The Blogs are contributed by third parties. The opinions, facts and any media content in them are presented solely by the authors, and neither The Times of Israel nor its partners assume any responsibility for them. Please contact us in case of abuse. In case of abuse,
Report this post. 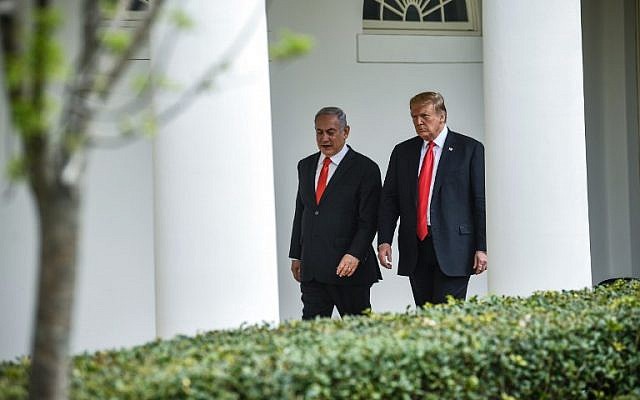 US President Donald Trump (R) and Prime Minister Benjamin Netanyahu talk while walking to the West Wing of the White House for a meeting, March 25, 2019. (Brendan Smialowski/AFP)

Like many Americans, I am deeply troubled by the rise of anti-Semitism in our country, and particularly the rise of anti-Semitic violence. In December alone, we saw a number of violent attacks driven by hatred that cannot be tolerated in our county or anywhere in the world. Americans must stand with our neighbors in the Jewish community and denounce this vile hatred. It is incumbent upon all of us to call out this anti-Semitism and stand resolute against it.

After the Holocaust, we said “never again.” But this type of anti-Semitism that we see growing in our country, especially on college campuses, has only led to more voices spewing hate, some even denying the very existence of the Holocaust. A recent survey commissioned by the Anti-Semitism Accountability Project found that 14 percent of Americans believe the Holocaust was a myth or has been exaggerated. That is shocking and underscores the extent of disinformation confronting Jewish Americans. The rise of the “Boycott, Divestment, and Sanctions” movement against Israel is making the situation worse here — and across the world. Make no mistake, the BDS movement is fanning anti-Semitic flames.

At home, we must stand with Jewish Americans, but we must also stand with the Jewish community across the globe, and that means standing firm with our ally, Israel. We have a moral obligation to protect Israel. The path to peace in the Middle East runs through a strong US-Israel relationship, and as such, the choice to stand alongside Israel is a clear one.

As the United States ambassador to Japan, I saw first-hand how important it is to support our allies, especially when they are in dangerous geopolitical regions. Regrettably, President Barack Obama sent a damaging message both to our allies and to our enemies by “leading from behind” and deploying “strategic patience.” That approach made our country — and our world — less safe.

But now President Trump is fighting to restore our rightful place as a leader on the world’s stage. He is ensuring that, once again, our allies adequately support us and our enemies fear us, and he is making good on long-standing promises as he moved our embassy to Jerusalem. Clearly the president needs allies in the US Senate who will work with him to achieve our critical foreign policy objectives.

The Tennesseans I seek to represent in the Senate stand with Israel — and Tennesseans know that, as their senator, I will support Israel. That requires calling out Israel’s enemies and making our support for Israel abundantly clear, especially for those hostile powers that deny its right to exist.

First and foremost, we must be explicit that we will not tolerate bullying from Tehran. We need only look at the events of recent days to be reminded that Iran — the world’s largest state sponsor of terror — is one of our most serious national security threats. Tehran is a belligerent power completely hostile to the United States, and it is at the center of the turmoil in the Middle East. We cannot allow Iran to develop a nuclear weapon. Period. A nuclear Iran would have disastrous consequences, allowing it to further harass its neighbors and put nuclear weapons in the hands of terrorist organizations. We must continue to work towards a permanent nuclear deal that ensures Iran will never have access to a nuclear weapon.

Israel is a beacon of democracy and individual liberty in a region controlled by aggressive dictators. As the United States seeks to protect peace and fight for our interests across the globe, we should continue our assistance to Israel, and we ought to support peace negotiations for a two-state solution that demilitarizes Palestine and puts the two people on a path to stability and peace. Our goal must be to end the incitement of violence among the terrorist groups that are clients of the Iranian regime.

There should be no doubt. The American people support the Jewish community, and we support Israel. Together — and under President Trump’s leadership — there will be no question. We stand with you.

About the Author
Bill Hagerty is a private equity investor who served as the United States ambassador to Japan under President Donald Trump. He is currently running for the United States Senate in Tennessee.
Related Topics
Related Posts
Comments