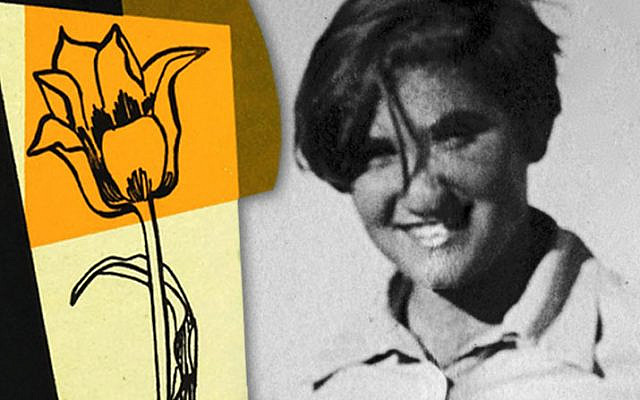 'With me, things go very deep and I stay true to what I internalized as a child.' (Source images: 'Flowers of the Carmel' & The Bracha Avigad Collection, Nadav Mann / Bitmuna via the National Library of Israel Digital Collection)

In Israel’s early years, there was a very real and present danger that the country’s beloved wildflowers would soon go extinct due to over-picking.

A law forbidding the act was passed in 1963, and a subsequent wildly successful public awareness campaign changed everything, as posters commanding the public to not pick, uproot, buy or sell wildflowers popped up all over the young country.

Simple wording and beautiful illustrations made the campaign one of the most successful of its kind in Israel’s history, ensuring that the wildflowers dotting the biblical landscape continued to flourish, which they do until today. 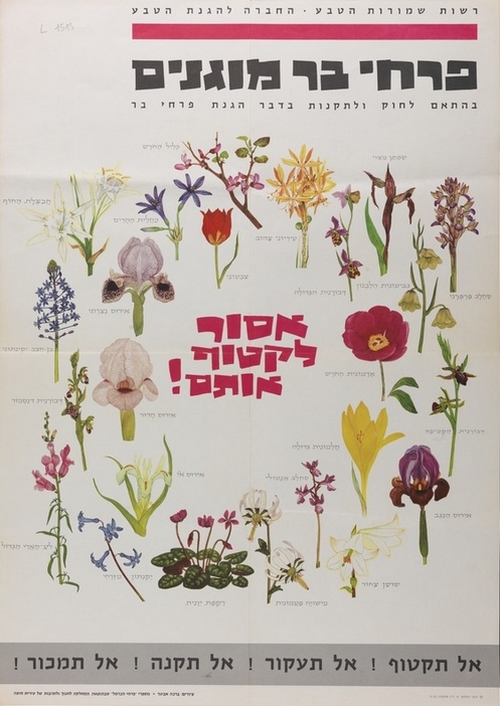 Bracha Avigad was responsible for those illustrations and though many never knew her name or story, generations have grown up knowing Bracha’s work from posters, books, postcards and even decorative plates bearing her iconic flowers. 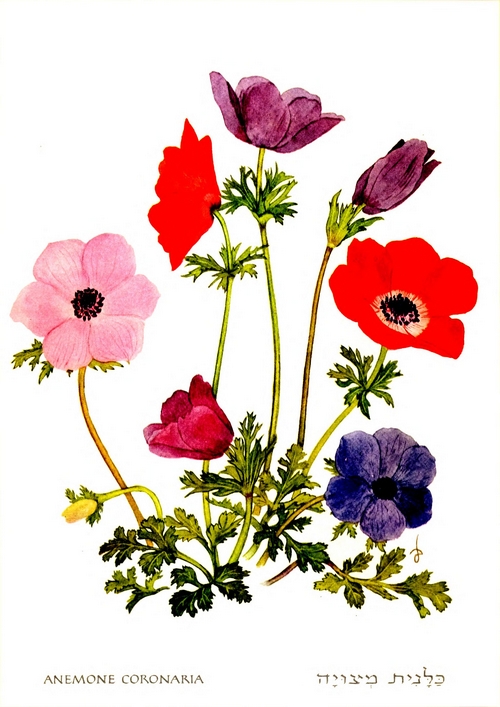 Illustration by Bracha Avigad appearing in the book Flowers of the Carmel, 1958. From the National Library of Israel collection.

Born Beatrix Guttman in Latvia in 1919, Bracha grew up in a relatively bourgeoisie urban environment in Darmstadt, Germany, yet some of her earliest memories — recounted in a  2014 interview conducted as part of the Toldot Yisrael initiative — reveal visceral connections to three passions destined to remain with her throughout her long life: the Land of Israel, nature, and art.

On her father’s side, Bracha descended from a family of French vintners; on her mother’s, caretakers of Latvian estates belonging to absentee German landowners.

The Germany of her childhood was characterized by exponential inflation and tremendous poverty, the result of the country’s defeat in the First World War and subsequent reparations imposed upon it by the war’s victors. Nonetheless, Bracha grew up in relative comfort.

She recalled feeling awkward wearing a fur coat as a child, knowing that impoverished city residents would forage in the surrounding countryside for strawberries and mushrooms. Some would use acorns to create a substitute for the coffee they could not afford. 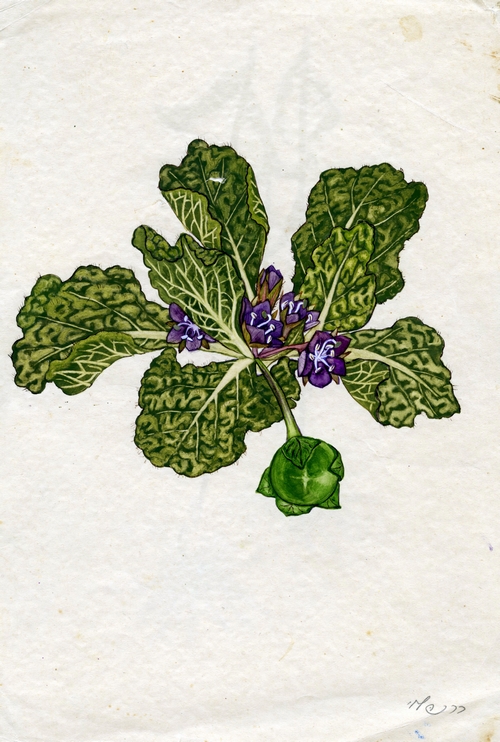 Though she may not have needed to forage like others, Bracha was intimately familiar with the very same countryside, which she would visit with her neighbors, one of the few families that had a car. While the neighbors’ “nationalist” leanings and “cruel” disposition made young Bracha uncomfortable, the duel allure of the automobile and the German countryside proved irresistible.

Other neighbors in her building provided childcare for young Bracha while her parents were at work. The man in the family was a professional artist — the first Bracha ever met — who received payment from the city of Darmstadt in exchange for submitting a work of art every three months. While his artist’s heart resented the arrangement, it paid the bills during those austere years. 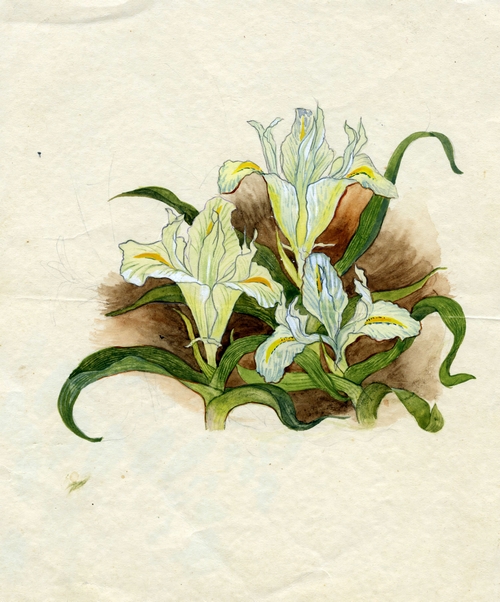 Bracha’s warm memories of much time spent in their home undoubtedly planted an artistic seed in the mind of the impressionable young girl.

While she certainly expressed her artistic talents throughout childhood, Bracha didn’t know how gifted an artist she was until a sixth grade teacher, who belonged to the Nazi party, pinched her cheek and told her what a shame it was that she was born a Jew because otherwise he would have sent her to the prestigious Munich Academy of Fine Arts. 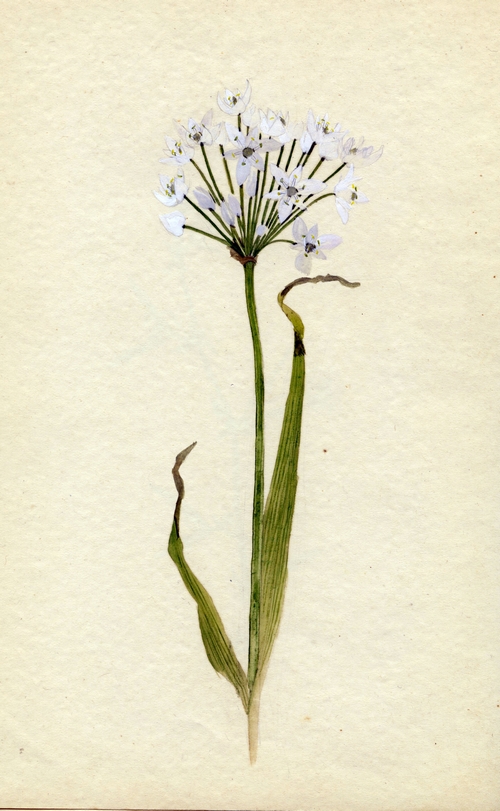 Bracha’s adventurous father had traveled the world before coming back to Germany to fight for the Fatherland during World War I. He earned a medal of valor for his service in the naval air force, an honor later stripped from him for being a Jew.

Not long after returning from the war, he was denied a job at the pharmaceutical giant Merck due to his “race,” yet remained a very proud German. In fact, most of his friends and many, if not all, of the people Bracha interacted with in her earliest years were not Jewish.

It wasn’t until she went to school that she encountered anti-Semitism for the first time.

After a classmate derogatorily called her a Jew, Bracha returned home and asked her mother what a “Jew” was.

“They’re just jealous of you,” her mother explained, “You see, I buy you cherries… They can’t buy it for themselves, so they hate…”

She dangled the cherries next to her daughter’s ears — an image that remained with Bracha for the rest of her life; a botanical image in the mind’s eye which certainly may have later made its way onto the canvas in one form or another.

Blossoming in the Land of Israel

Within just a few short years of her teacher “discovering” the young artist’s talents, Bracha was kicked out of school because she was Jewish. She soon moved to the Land of Israel where she enrolled as part of the second class of New Bezalel, the successor to Boris Schatz’s legendary Jerusalem art school which largely defined the artistic expression of Zionist culture.

She received a scholarship to attend Bezalel from no other than Henrietta Szold herself, after Bracha had presented a collection of some of her work to Szold. 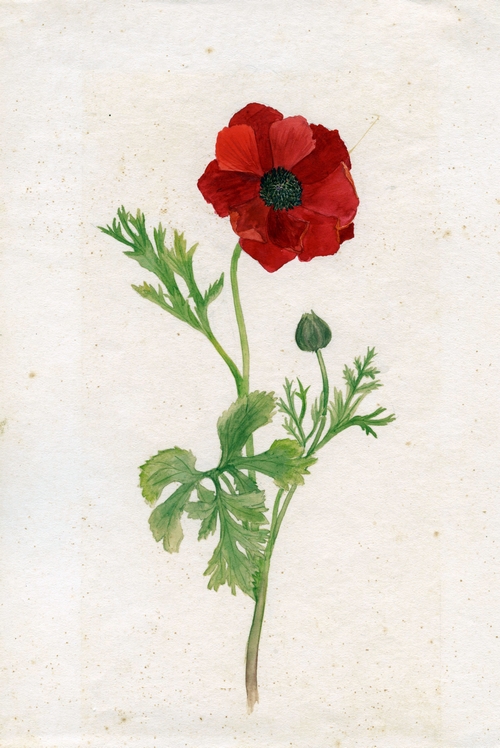 Poppies like this one (kalaniyot in Hebrew), are one of the most prevalent and beloved signs that spring is on its way across Israel. Drawing by Bracha Avigad presented to Henrietta Szold, 1930s. From the Bracha Avigad Collection, Nadav Mann / Bitmuna; available via the National Library of Israel Digital Collection.

While leaving Germany in 1935 was obviously very much a result of increasingly unbearable anti-Semitism, Bracha’s connection to the Land of Israel — and its flora — had very deep roots.

As she approached 100, Bracha could still sing a favorite song about orange trees and date palms in the Land of Israel, which her mother had sung to her as a small child. 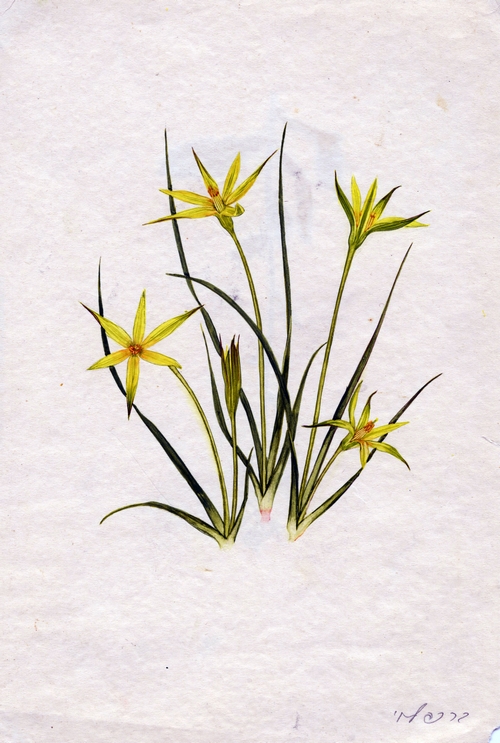 Around the age of five, Bracha went with her family to visit her maternal grandparents in Latvia. Upon seeing a large cane in their home — which she identified as the type that might be used to punish naughty children in fairy tales — she asked her grandfather what it was for.

He answered, “My little one, when the Messiah arrives I will take the cane in my hand and all of us will walk to the Land of Israel.”

Her grandfather’s teachings, as well as his blue Jewish National Fund tzedaka box and her mother’s songs, imbued in Bracha a very deep-seated sense of Zionism, as she dreamed of one day going to the Land of Israel, though not necessarily by foot.

Caper plants like this one grow out of the Western Wall in Jerusalem. Illustration by Bracha Avigad appearing in the book Flowers of the Carmel, 1958. From the National Library of Israel collection.

Not long before Bracha was kicked out of school for being Jewish, she remembered being greatly impressed by an exhibit of watercolor flower paintings on display in a German gallery. Upon seeing it, she promised herself, “If I get to the Land of Israel, I’ll paint the flowers of the Land of Israel!”

For some seven decades, Bracha made good on her childhood promise, not only painting the flowers of the Land of Israel but also playing a significant role in saving them from extinction.

This article first appeared on “The Librarians,” the official online publication of the National Library of Israel. Check it out for more stories on Jewish, Israeli, and Middle Eastern history, heritage and culture.

Many thanks to the Toldot Yisrael team for their assistance preparing this article, much of which was based on their 2014 interview with Bracha Avigad, two years before she passed away. Toldot Yisrael is an initiative dedicated to documenting the testimonies of the State of Israel’s founding generation. The collection is now deposited at the National Library of Israel in Jerusalem.

To view the complete interview with Bracha Avigad (in Hebrew): Part I, Part II, Part III.
For original works from Bracha Avigad in the National Library of Israel Digital Collection, click here.