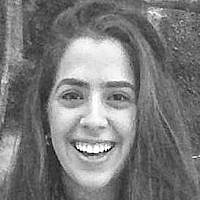 The Blogs
Orly Margulis
Apply for a Blog
Advertisement
Please note that the posts on The Blogs are contributed by third parties. The opinions, facts and any media content in them are presented solely by the authors, and neither The Times of Israel nor its partners assume any responsibility for them. Please contact us in case of abuse. In case of abuse,
Report this post. 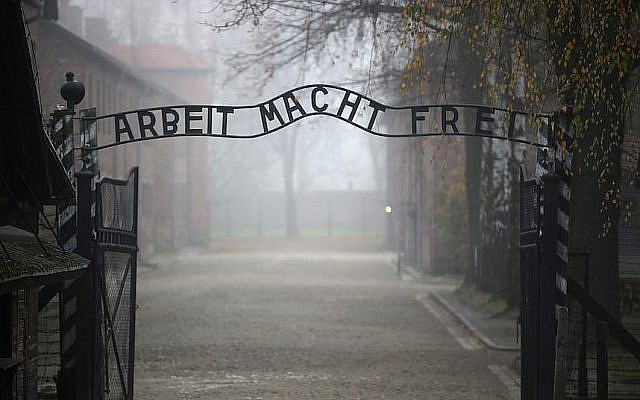 The infamous German inscription that reads 'Work Makes Free' at the main gate of the Auschwitz I extermination camp in Oswiecim, Poland, on November 15, 2014. (Christopher Furlong/Getty Images via JTA)

I was wearing a rain jacket even if it was 70 degrees out. I was holding my grandmother’s book on my right hand, while I fixed the Israeli flag that was on my shoulders with my left one. I was not paying attention to the pretty white flowers on the side of the tracks, nor my friends that were talking about how they can’t wait to land in Israel and go to the beaches in Tel Aviv. I was not even paying attention to my professor listing once again the rules of the trip. I was staring at the upside-down B in the entrance of the camp. Arbeit Macht Frei. Work Sets You Free.

I spent the afternoon watching Rollie Pollie Olie instead of helping my mom and my grandma, whom I call Abu, cook for Shabbat. Granted, I was 5-years-old, but I could have done more than just staring at a screen while these cute robots were going on adventures. My brother came into my parent’s room, turned off the TV, and told me to go light the candles.

My abu was reaching for the matches when I saw something written on her forearm. It was not a reminder to get more milk or to tell my uncle to pick her up this Sunday after her bridge game. It read A-27165

My abu and my omama (her mom) were in line when she saw a man in uniform screaming. People in striped pajamas were leaving the place touching their arms, touching the exact place were their new identity was written. My abu was scared, so Omama changed places with her to protect her.

“See? It doesn’t hurt,” Omama told my abu. It was my Omama’s way of showing my abu that she could do it, that she could face this. The number tattooed on her arm wasn’t my abu’s, but her mother’s. Yet, it was the number that stayed with her all her life.

I couldn’t understand what it meant. When I was told my abu was in World War II, I could only picture people viewing the war. I pictured a Coliseum and two group of people fighting in the middle. I was 5-years-old back then, and I didn’t know anything about the Holocaust or Shoah. By age 6, I knew who Hitler was, and what he did to my family.

The day before going to Auschwitz, we went to Treblinka. Only rocks representing the cities of the lives lost were there. No gas chambers, no crematoriums, no barracks. It was not the same as going to Majdanek, a camp that is still intact. But Auschwitz felt different. It was where my abu and my grandpa had been.

I was so familiar with what happened in each of the extermination camps. I knew the difference between each of them, the reasoning behind having the camps in Poland instead of Germany. The name of the general in charge of the management of the camps. I even knew the number of crematoriums, gas chambers, barracks and any other detail about the camp. I studied the camps back in eighth grade; I couldn’t forget them. Knowing these facts and seeing them there, in front of me was completely different.

I could picture the 12-year-old Trudy facing Joseph Mengele, lying to him about her age. If she had not done that, I would not be standing there 65 years later, wearing the same rain jacket she had worn the day she returned to Auschwitz for the March of the Living. I would not be holding the book she wrote about her experience, and I would not be wearing the Israeli flag on my shoulders. I simply would not be there.

I would not have the memories of going to her house every Shabbat dinner and eating with her two children, my mom and her brother, and their spouses. My two brothers and my two cousins would not be there passing the salt or eating all the kugel before I had the chance to even taste it.

But my abu did lie to Mengele, and my abu did survive the killing machine that was Auschwitz

The first stop on our tour was not the Arbeit Macht Frei sign, but the section of the camp were the workers would look for the confiscated goods, and see what they can find to give to the regimen. Whatever the Jews brought with them to the camp, was taken away and sorted by other prisoners. This is the section where my grandpa Alfred worked. He, among few other prisoners, were the only ones from his group, who survived the war in 1945 after the Death March. Years later, I found out that both my grandpa Alfred and my great uncle Nissen walked the march, and both survived.

I listen to the tour guide tell us all about Kanada, even if I already knew about it. Even if my grandpa Alfred never spoke much about his experience, I knew a lot about that section of the camp.

His number summed up 18, as in Chai, the symbol for life in Hebrew. He was destined to live. And he did.

My grandpa Alfred was very sick when I was born, so I don’t have many memories from him. I do remember one day he was looking out of the window when I walked into my grandparent’s apartment holding my mom’s hand. He saw me and screamed “Princesita!” (little princess) and I ran to hug him.

Everything I know about his period in Auschwitz is from my mom’s and uncle’s stories. And my abu, who would tell me about him, about how they met and how they came to Venezuela together.

Aaron, one of our guides, tapped me on the shoulder right before lunch. He talked to Rebecca, the professor who for years had organized this trip, and together they had decided that it was okay for me to deviate from the group’s itinerary to go see my grandma’s barrack. A couple of years before our trip, my abu went on “March of the Living” and Aaron was there with her. She took her group with her to her barrack, and he remembered the way there.

All my friends were eating what we called the “unhappy meal”: a box with a sandwich that had been brought over from Israel more than a week before. All my friends were complaining about the nasty sandwich, the small size pack of chips, and how hot the water bottle was. All of them were complaining about their lunches, but I was just staring at the closed door of the barrack.

I was wearing my abu’s rain jacket. I was holding my grandmother’s book on my right hand, while I fixed the Israeli flag that was on my shoulder.

I called her immediately afterwards to tell her how much I love her.

Seven months after visiting Auschwitz, I went to the Holocaust Museum in Washington DC.

The whole museum was a blur for me, I barley remember the exhibits. I only remember the one that was called “The Last Chapter.” In it, videos and pictures about the liberation of Nazi camps are displayed.

We watched them all, but I only remember one specific video showing a little girl holding her feet.  She was crouched down, looking lost, when a nurse approached her. She was holding her feet, which were recovering from the atrocity Mengele and the other “doctors” of the camps had done to her.

I fell down, still looking at the screen. Seven months before that, I had been standing in front of the barrack where she had slept, and today I was staring at her. I was staring at the 12-year-old Trudy the day she was born again.

I called her immediately afterwards to tell her how much I love her. 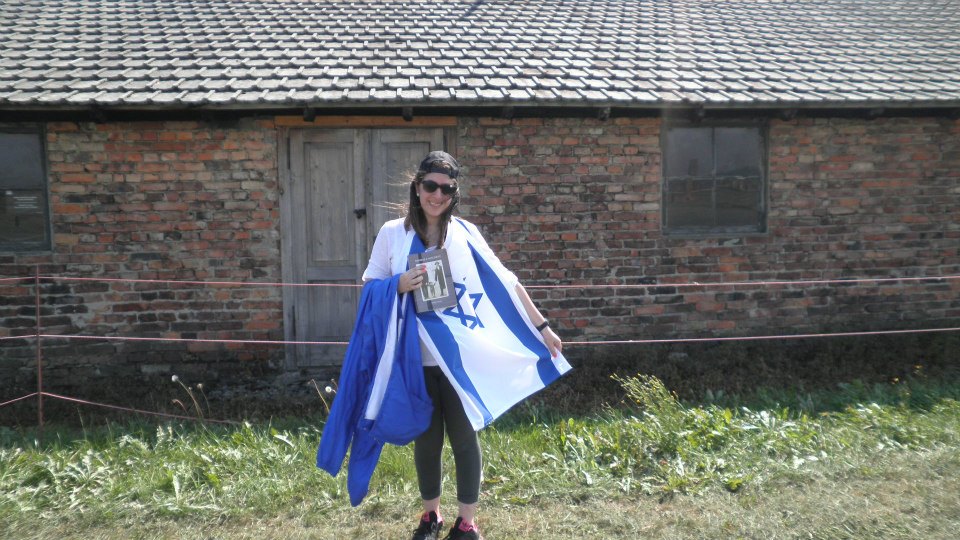 I went home after her funeral, and I searched for her jacket. I grabbed her book and went to my room, where the Israeli flag was hanging from my wall.

This time, I couldn’t call her to tell her how much I love her.

Ed. note: The upside-down B in the famous sign on the gate to Auschwitz, “Arbeit Macht Frei,” is regarded as an act of defiance on the part of the prisoners who made it.

The gate at the entrance to Auschwitz. (Wikipedia)
About the Author
Orly Margulis is a Jewish girl born and raised in Venezuela. She studies journalism at Drexel University. She is a book lover, passionate writer and color-code obsessed.
Related Topics
Related Posts
Orly Margulis
Comments