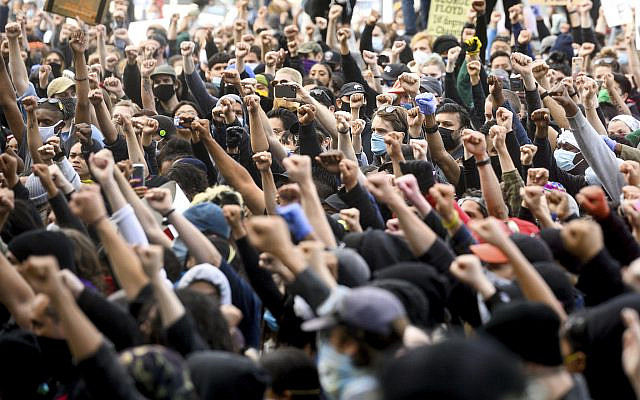 Demonstrators rally in San Francisco, California, on May 31, 2020, protesting the death of George Floyd, who died after being restrained by Minneapolis police officers on May 25, 2020. (AP Photo/Noah Berger)

The world — this ravaged world — is a veteran of disasters, and violence, and cruelty.

(A man is dying, dying, dying on the ground, and he can’t breathe, and another man won’t let him. What deadened that other man’s insides? What made him able — so, so able — to bring about the first man’s death?)

This world — this battle-scarred, old world — has seen it all before.

(A man is dying, dying, dying on the ground. You came from dust, and to dust you shall return, says the world, bearing witness. Such is the way of all things. The cycle goes on and on.)

Spring is racing to its end, and summer will come, and then the birds will leave again, and today’s leaves will be the forest floor come winter. All things toil to weariness; all those who breathe stop breathing eventually, and there is nothing new under the sun.

The air and the world go in and out of me, like the wind that goes round and round and round. In: the knee on the neck. Out: incredulity. In: riots in LA. Out: concern.

Can these riots truly change the status quo?

In and out and in again, and Ecclesiastes was wrong — something is new. With each breath and each pain, I lose some of my feelings. My sorrow grows stale. I find that I can turn away.

But the world says — this is not new. You are not a veteran in the ways of desolation, child. You haven’t seen all that I have seen. It hath been already, this diminishing of sorrow. It hath happened to others, in the ages before.

You are wrong, I want to tell the world. You should not reduce us all to types and patterns. The man who died — he was an entire world, not a symbol, not a hashtag, not a repetition in a never-ending scheme. And I am me, myself. I am my own responses and ideas.

Prove it, the world answers in a whisper.

But how am I to prove it wrong?

There is a poison in my veins: the world has served it to me. It’s an old poison, the world tells me. It’s been here from the beginning of our kind. Its name is hopelessness, and it does deaden us. It’s a deceptive poison, though; at first it tastes like hope.

(This too shall pass, I think as the man is dying, dying, dying on the ground. The words taste like hope in my mouth, but they are truly the seeds of despair. They’ll make me turn away, and hope for change – for a while. But the change won’t come, and my hopefulness will wilt.)

Stop, stop, this shall not pass, I try to say, though all my inner voices keep saying, “Trust in human goodness,” or “Something will come up and redeem us all,” or even simply “There is nothing you can do except be kind yourself and hope now.” They are working to feed this toxic, passive, helpless hopefulness. They think that they will heal me.

That which hath been is that which shall be, says Ecclesiastes. My hope brings me closer to accepting this sentiment, because hope without action dooms itself to fail. Make the world stop, I tell my inner voices. This too shall pass — but not if we do nothing. We must feel the pain now, if we are ever to have cause for lasting hope.

It would be nice to close my eyes, to trust that someone else will fix this, to be an optimist. It would be so, so nice, and so very good for my inner peace of mind.

A man is dying, dying, dying on the ground. Will I allow myself to deaden my own sorrow? Will I choose short-lived optimism, or will I be brave enough to prove Ecclesiastes wrong?

A man is dead now.

I want to look away now.

George Floyd died on May 25th 2020, after a police officer knelt on his neck for over eight minutes. I don’t know to what extent, and in what way, factors like race, local violence, and police training played a role in his death. I don’t know what needs to change to prevent similar deaths from occurring. I suspect that many of the answers that we hear now are agenda-driven and inaccurate, and I don’t presume to be able to tell which ones are true, and which are false.

But I think that for all of us, there are moments when something happens, and hits us, and demands our attention, and that to turn away from such moments is a betrayal of ourselves. At such moments, “not knowing what’s right” and “not knowing what’s true” must not prevent us from taking action. We can do our best to be circumspect and wise and careful, but to do nothing is to deaden some part of ourselves, as surely as if we drank a poison for the soul.

For me, George Floyd’s very public death was such a moment.