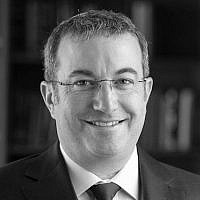 The Blogs
Ari Berman
Apply for a Blog
Please note that the posts on The Blogs are contributed by third parties. The opinions, facts and any media content in them are presented solely by the authors, and neither The Times of Israel nor its partners assume any responsibility for them. Please contact us in case of abuse. In case of abuse,
Report this post.

Emerging from the White House last week after the announcement of “Peace to Prosperity: A Vision to Improve the Lives of the Palestinian and Israeli People,” the new US Middle East peace plan, I felt the pull of history.

From the days of antiquity, Israel has stood as the ancestral and eternal homeland of the Jewish people. Israel as a Jewish state is not a 71-year-old story but is a continuation of a story that dates back 3,000 years.

At the same time, current reality is that Israelis and Palestinians are living side by side with one another. Any vision of the future needs to account for some level of cooperative coexistence. Unlike past models, the new plan assumes the fundamental Jewish connection to the land while also not simply wishing away whole cities and towns of either Jewish or Palestinian residents. It carefully considers how to create separations and bridges so that Israel’s security and right to self-defense is protected while also creating a pathway for a new Palestinian de-militarized state with a flourishing economy.

This plan is built on Jewish values that respect the truth of history while also promoting greater human flourishing for Palestinians and Israelis alike. This is not a coincidence: the architects of this plan were born and reared in our community, and we owe a debt of thanks to President Trump’s team, including Jared Kushner, Ambassador David Friedman, Avi Berkowitz and our distinguished YU alum Jason Greenblatt.

Whether the plan will ultimately be successful is hard to know. While both major political parties in Israel have endorsed it as a basis for negotiations, the Palestinians have so far refused to come to the table. And even if they do, this would just be the beginning of a much larger journey.

But the new plan has already achieved a measure of success, for it shifted the paradigm of what a peace agreement can look like and reframed the narrative of the Jewish people’s connection to Israel.

All people of good will and conscience should pray for the plan’s success, for while the past is already set, the future is untold, and if we build off this framework, we can create a Middle East society which works to fulfill the dream of peace and prosperity for all people in the region and all of society.