The Blogs
Ted Deutch
Apply for a Blog
Please note that the posts on The Blogs are contributed by third parties. The opinions, facts and any media content in them are presented solely by the authors, and neither The Times of Israel nor its partners assume any responsibility for them. Please contact us in case of abuse. In case of abuse,
Report this post. 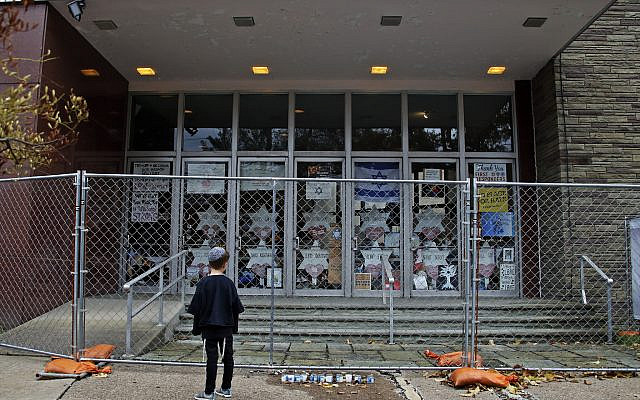 A young boy looks at the fenced off entrance to the Tree of Life synagogue in Pittsburgh on October 27, 2019, the first anniversary of the shooting at the synagogue, that killed 11 worshipers. (AP Photo/Gene J. Puskar)

After more than 100 Jewish graves were desecrated in the French city of Westhoffen this week, French leaders condemned the anti-Semitic graffiti and vowed to take action. “Anti-Semitism is a crime and we will fight it in Westhoffen as everywhere until our dead can sleep in peace,” French President Emmanuel Macron said.

Strong words by national leaders can help delegitimize bigotry and send messages of support to at-risk communities. But strong actions can help prevent the violence and punish the perpetrators.

In the United States, we are by no means exempt from the growing and troubling trend of anti-Semitic incidents, from graffiti to vile language to physical attacks.

It was just over one year ago that the deadliest attack on American Jews occurred when a gunman killed 11 worshippers at the Tree of Life synagogue in Pittsburgh. It was earlier this year that Lori Gilbert-Kaye was killed as she attended Shabbat services at the Chabad of Poway, California. Jews have been targeted, harassed, and even attacked while walking in their neighborhoods and heading to school in New York City.

According to the FBI’s 2018 Hate Crime Statistics Act report, 57.8% of hate crimes motivated by religious bias were against Jews. Conspiracy theories that Jews control the government, the media, and global finance have found their way into daily discourse and political advertisements and are spread far and wide on the internet.

In Congress, we have not been silent. Four years ago, we launched the Bipartisan Task Force for Combating Anti-Semitism as a forum for understanding the threats against Jews at home and abroad and developing legislative ways to address them.

After hearing firsthand accounts of the worsening climate for Jewish students on college campuses, I introduced the Anti-Semitism Awareness Act to strengthen the US Department of Education’s ability to respond to anti-Semitic incidents. I also helped pass bipartisan legislation to strengthen the US Department of State’s envoy for combating anti-Semitism, a position Elan Carr holds with great distinction.

It is now time for a broader approach that raises the level of our federal government’s strategy for combating anti-Semitism in our communities.

Only hours after the desecration of the cemeteries in Westhoffen, the French National Assembly voted to adopt an internationally-recognized definition of anti-Semitism, joining dozens of other countries who have already done the same.

This working definition was established in 2016 by the International Holocaust Remembrance Alliance (IHRA), an organization made up of 34 member countries, including the United States, focused on international coordination in combating anti-Semitism and rejecting Holocaust denial.

The goal was to create a tool to help educate people about this form of bigotry, make it easier to identify anti-Semitism in everyday situations, and aid governments in developing effective responses to it.

Since 2016, over a dozen countries have adopted or endorsed the definition, as have the European Parliament and the Secretary-General of the Organization for American States. The United Nations Secretary-General António Guterres acknowledged the IHRA Definition, saying that “such a definition can serve as a basis for law enforcement, as well as preventive policies.”

In the recently released first-ever United Nations report focused exclusively on anti-Semitism, the Special Rapporteur on freedom of religion or belief Ahmed Shaheed recommends that all countries adopt the IHRA definition.

Opponents of this definition argue that it would encroach on Americans’ right to freedom of speech. But this definition was drafted not to regulate free speech or punish people for expressing their beliefs, however hateful they may be. It would not suddenly make it illegal to tweet denial of the Holocaust or go on television accusing Jews of being more loyal to Israel than the United States. But it would identify those views as anti-Semitic.

This definition can serve as an important tool to guide our government’s response to anti-Semitism.

Here at home, the definition is already used by the Departments of State and Education. It is time for the United States to tackle the scourge of anti-Semitism by identifying, condemning, and combating it wherever it rears its ugly head.

It is time to adopt the IHRA definition in the United States, and Congress has a critical role to play. This will not only send a clear message of support to the American Jewish community that feels under increasing threat by the rise in anti-Semitic attacks, but it would lay the groundwork for a whole-of-government strategy to combat anti-Semitism.

Anti-Semitism is a global problem. It cuts across racial, religious, political and ethnic lines. It’s time for our federal government to lead by example and use the IHRA definition as a guide for protecting the American Jewish community.

About the Author
Ted Deutch is a Democratic member of the United States House of Representatives for Florida's 22nd congressional district.
Related Topics
Related Posts
Comments