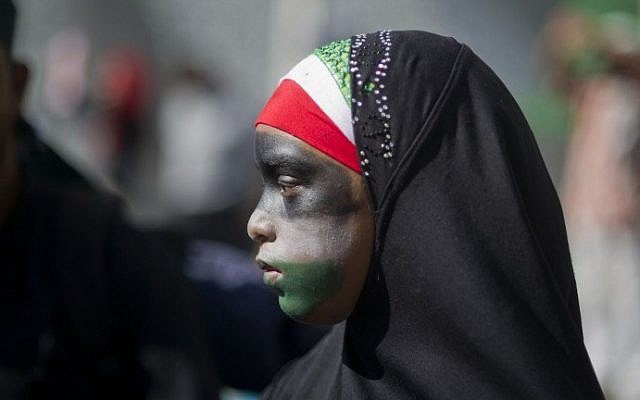 Illustrative: A girl wearing a hijab and with her face painted in the colors of the Palestinian flag taking part in an anti-Israel march in South Africa, on August 9, 2014. (Roger Bosch/AFP)

One of my most favorite times of the week is 4:30 a.m. on a Shabbat morning. The house is quiet and there is no technology to distract me.  Once the dogs have been taken outside and coffee has been made, I can settle into a comfortable couch where I get to spend a few hours catching up on my reading.

I am cheap date when selecting something to pass this time, and, aside from the Shades of Grey series, I can get through pretty much anything. Mostly I enjoy it.

This past Shabbat, however, I was feeling a little more serious, and started a book called “Apartheid, Guns and Money.” The book is an expose of the industries that were to a greater or lesser extent involved with the Apartheid Government.

Only I couldn’t read it.

Not because it features any more weapons than Shades of Grey or more money, but rather because every time I read the word “apartheid” my brain automatically added the word “Israel.” Even though it wasn’t in the text. “Apartheid Israel” became a refrain in my head whenever the word “apartheid” was mentioned. It was like something was short circuiting and my brain was glitching.

At 4:44 a.m. on a Shabbat morning, I experienced full blown Pavlovian response to the mention of the word “apartheid.” And it was really scary.

By 4:55 a.m., I had abandoned all attempts to continue and managed to lose myself in Cynthia D’Aprix Sweeney’s The Nest. Which provided a delightful respite.

But the experience didn’t leave me. And so, on Sunday I decided to take note as to how many times I come across the phrase “Apartheid Israel.” I was horrified. I stopped counting when I got to 100, but also began to appreciate why it is that my brain reacted as it did.

The reality is that because I am active in the field of Israel advocacy, I most likely come across this phrase more than others who are not. And because I am involved and know the truth, no amount of repetition will convince me that the two words belong together. So if the constant repetition of a lie has an affect on me, we can only imagine the affect that it has on those who are not attuned to the propaganda of the Racist-BDS movement.

Much of the Racist-BDS movements strategy involves emotional and manipulative imagery. They employ the Joseph Goebbels approach to the replication of a big lie over and over. And, sadly, the result is seriously damaging.

A perplexing aspect to the strategy is that the “Apartheid Israel” phrase has taken root in South Africa. A country that should know better. A country that suffered directly under the real and brutal apartheid. I am constantly amazed that South Africans are so quick to abandon their history to a lie. And yet many do.

We know that words are powerful. People are inspired and moved through beautifully crafted sentences. We are motivated by words to do good as well as evil, and it is with words that we express love and emotion and gratitude. Words bring us to tears, they make us laugh,  and words comfort us.

The War of the Words is the BDS battlefield and that the battle needs to be fought where it is found. I believe that a different approach needs to be taken and that BDS needs to be dealt with by altering the association of words that stand alongside the racist movement.

I suggest that, as a first step, the word BDS should never be uttered without the word “racist” attached to it. Because that is what the movement is — It is the bigoted racial focus on a group they seek to destroy. And we need to call it what it is.

And so in a few weeks, after I have changed my lexicon and I read an article on the Racist-BDS movements, I fully expect my mind to add the word “racist” anytime the word BDS is mentioned without it. It’s time to fight this war one word at a time.

About the Author
Howard Feldman is a lawyer, a physical commodity trader by industry and a writer by obsession. He is very active in the Jewish community and passionate about our world.
Related Topics
Related Posts
Comments
Advertisement