This coming election, the fifth in less than four years, is qualitatively different from the ones that preceded it. Those other elections were referendums on the worthiness of Benjamin Netanyahu to lead the state of Israel. This time, the stakes are far higher: Consciously or not, Israelis will be voting on the future of Israel as a modern state.

Each component of Netanyahu’s coalition has declared war against another essential element of modern Israel, the foundation of the Israeli success story.

The Likud seeks to destroy our independent judiciary, overriding its ability to monitor political corruption, and thereby extricate Netanyahu from his legal woes. An internationally respected judicial system that is held up by Israel’s supporters abroad as the most compelling proof of our vibrant democracy, and that has protected us from attempts to criminalize the Jewish state, would be sacrificed for the sake of a politician who is no longer motivated by the country’s interests, only his own.

The ultra-Orthodox parties seek to permanently burden the Israeli economy with a rapidly growing population incapable of joining a cutting-edge workforce, dependent instead on government largesse. To preserve the walls around their separatist society-within-a-society, ultra-Orthodox leaders are prepared to accommodate Netanyahu’s hedonism and Itamar Ben Gvir’s apocalyptic recklessness, the coalition of the amoral and the immoral, all in the name of “Torah-true Judaism.”

The outgoing government achieved an historic agreement with the Belz Hasidim, one of the largest and most important Hasidic communities, to introduce a secular “core curriculum,” including math and English, into their schools. But under pressure from the ultra-Orthodox parties, Netanyahu has agreed to suspend linking state funding of ultra-Orthodox schools with acceptance of the core curriculum. Who needs English and math, Yitzhak Goldknopf, head of the United Torah Judaism party, recently told an interviewer.

The final and most devastating component of the coalition against Israel’s ability to function as a sane, modern society is the nationalist far-right. Ben Gvir’s “Jewish Power” party (which is running jointly with the “Religious Zionism” party) would destroy the intactness of Israeli society, replacing the fragile coexistence between Israel’s Arabs and Jews with nothing less than civil war.

For all the tensions, most Arabs and Jews have learned the habit of practical coexistence. This is one of Israeli society’s most impressive if largely unacknowledged achievements. Despite the Palestinian-Israeli conflict, Arabs and Jews interact, often easily and sometimes intimately, in parks and shopping malls and hospitals, as neighbors. Ben Gvir and his allies regard this interaction as intolerable.

Though Ben Gvir claims to have abandoned the extremism of his Kahanist youth, he continues to revere as his spiritual leader the late Rabbi Meir Kahane, who created a racist theology that places hatred and vengeance at the core of Judaism. Until a few years ago, a photograph of Baruch Goldstein, the mass murderer of Hebron, hung in Ben Gvir’s living room; he removed it only when its presence began to cause him political damage. Ben Gvir’s long-term goal of expelling Arabs from Israel remains unchanged: Last week he urged the creation of a government “emigration office” to encourage Arabs to leave. And he intends to provoke such massive instability that the expulsion of large numbers of Palestinians, including citizens of Israel, becomes a conceivable option. 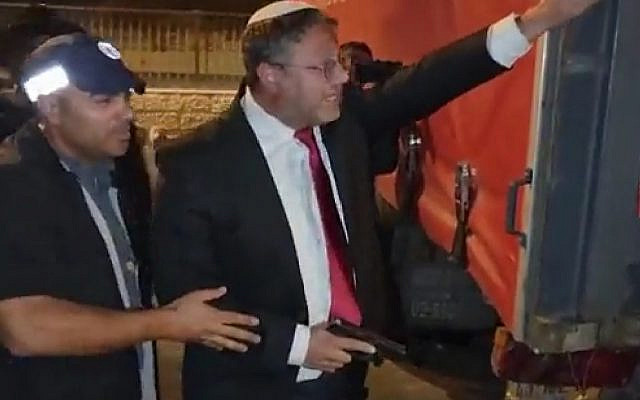 MK Itamar Ben Gvir brandishing a hand gun during clashes in East Jerusalem on October 13, 2022. (Screen capture: Twitter; used in accordance with Clause 27a of the Copyright Law)

Ben Gvir, who was rejected from army service because of a conviction for terrorist activity and who, buffoon-like, draws his pistol when even slightly provoked (as he did during a verbal altercation with an Arab over a parking spot), is presenting himself as the answer to Israel’s security needs. But what he’s really offering is a vision of the Lebanonization of Israeli society, where the central authority has collapsed and been replaced by rival militias. Instead of the IDF, we will be protected by Jewish street gangs, like the hilltop youth who attack random Palestinians and even IDF soldiers.

Ben Gvir’s spiritual mentor believed that Israel’s problems could be solved in a great cataclysm. And so, not surprisingly, Ben Gvir’s ultimate target is the Temple Mount, the one place that can ignite the Middle East. In changing the status quo there, he would risk inciting a holy war between Muslims and Jews – while humiliating Israel’s new Arab allies and stymying rapprochement with other Arab countries, especially Saudi Arabia. As growing parts of the Arab world seek accommodation with Israel, the Netanyahu coalition would empower the most extreme anti-Arab elements within Israeli society.

One of our responsibilities as custodians of this land is to rein in religious extremism, its uncontrolled passions and outrages, whether from Hamas and Islamic Jihad or from within our own midst. Giving power to Ben Gvir would betray that sacred trust.

Our ability to remain a decent nation despite relentless pressures that would have driven other societies to madness is one of the glories of the state of Israel. Those who would criminalize Israel and turn it into the sum of its failures erase the context in which Israel struggles to find its balance between moral imperative and relentless threat. The Israeli far right and the anti-Zionist left are united in their contempt for Israel’s heroic struggle for balance. Ben Gvir would abandon that struggle and turn us into a state driven by hatred and vengeance and justified by messianic bombast.

The tragedy of Benjamin Netanyahu

Netanyahu’s coalition against modernity marks the potential unraveling of his most cherished legacy. Ironically, though he has promoted himself as the only leader capable of protecting Israel, Netanyahu’s legacy is not about his supposed security achievements.

He failed to prevent Iran from approaching the nuclear threshold. He allowed suitcases of Qatari cash to be delivered to Hamas leaders, vainly attempting to bribe them into maintaining a quiet border. Instead, during his 12 years as prime minister, 12,000 rockets and missiles were fired from Gaza at Israeli communities – compared to less than a dozen over the past year.

He presided over prisoner exchanges that resulted in large numbers of terrorists being freed from Israeli prisons, many of whom reverted to terrorism. On his watch, Hezbollah massively rearmed, while the Negev turned into a lawless frontier. Netanyahu’s strategic doctrine, if such a thing exists at all, will be studied in the future by Israeli policymakers as a cautionary tale.

But where Netanyahu did leave a significant mark is in the development of modern Israel. He freed the Israeli economy from the vestiges of statism, encouraged Start-Up Nation and, as finance minister in the early 2000s, cut back on subsidies to the ultra-Orthodox community to pressure its young men to join the workforce. He vigorously expanded Israel’s alliances, especially with India and China and large parts of Africa. (Tellingly, the title of his 1993 manifesto was, “A Place Among the Nations.”) He was the Israeli politician who knew America best and could speak “American” to Congress and the media. He was the promise of a rational, modern Israel.

But now all those achievements are at risk. The Netanyahu coalition would severely harm Israel’s standing among its friends around the world; several of Israel’s most faithful advocates in Congress have warned of a coming crisis if Ben Gvir becomes a cabinet minister.

From one election to the next, the tragedy of Benjamin Netanyahu deepens. And now it has come to this, his final self-abasement, the unraveling of the legacy for which he is so justifiably proud. In the end, the war of Netanyahu’s coalition against Israeli modernity is a war against Netanyahu himself.

About the Author
Yossi Klein Halevi is a senior fellow at the Shalom Hartman Institute, where he is co-director, together Imam Abdullah Antepli of Duke University and Maital Friedman, of the Muslim Leadership Initiative (MLI), and a member of the Institute's iEngage Project. His latest book, Letters to My Palestinian Neighbor, is a New York Times bestseller. His previous book, Like Dreamers, was named the 2013 National Jewish Book Council Book of the Year.
Related Topics
Related Posts