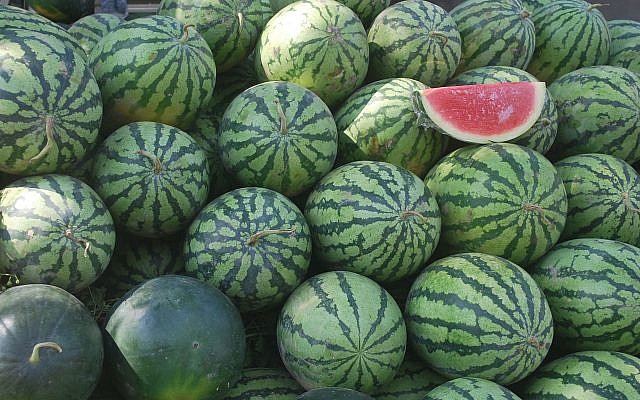 Looks like the annual summer war is upon us. I’m not talking about the flare up down south with Hamas in Gaza. Nor am I talking about the war drums beating on the Syrian front. Nope, I’m talking about a less-than-civil tete-a-tete unfolding at fruit stands and produce sections of supermarkets throughout this land of milk and honey.

First off, WTF. When did watermelons get so expensive? I know I’m dating myself a bit but, for fuck’s sake, weren’t watermelons half a shekel a kilo a few years ago? They’re like six-seven shekels a kilo now. Has watermelon growing technology become more expensive? Are we using AI to produce bionic watermelons? If we got cottage cheese down to a fair price, there’s no reason we shouldn’t make watermelons greatly reduced in price again.

But, alas, I’m not referring to the war on the price of watermelons. The real war is a civil one between married couples everywhere in Israel: which one of us can pick a sweet, delicious watermelon and which one is a complete frier who deserves to be paraded around town naked, holding a dud watermelon while everyone screams “Shame!” Yup. Win or lose, I think it’s fair to say that I always lose.

There are three things that make summer in Israel bearable: watermelons and air conditioners. I know, that’s only two, but I need two air conditioners working at the same time and to hell with that outrageous electric bill in September. I’m freezing at this moment in time. Literally.

So, the war starts out like any other great war — with a seemingly innocuous event. I decide to treat my loving wife and hell spawn of an offspring to a watermelon because I’m considerate and loving. I stop at the fruit stand (where prices are determined by outfit, accent and whim of the owner) I tap a few specimens using ancient techniques gleaned from wise Iraqi sages (and some YouTube video tutorials) and pick a heavy mf’er that ticks all the boxes; oblong, heavy and marked with a beautiful “field spot.” I knock on it a few times (glancing at the owner in a conspiratorial way) and voila. A winner. The sweetest watermelon ever. Guaranteed. No need to cut into it to taste. It’s a winner.

Before we go on. The five tastiest fruits in order of sexiness:

Stop reading if you don’t agree with this list. Go back to living your meaningless and wildly misguided life.

Anyway, I carry the heavy fucker a few hundred meters in the blistering heat. I’m drenched in sweat by the time I make it up four flights of stairs. My wife takes one look at me, a grizzly bear in summer, and I can tell she is skeptical.

“You picked it out yourself?”
“You betcha.”

She examines the watermelon from every angle like a crime scene investigator.

It’s fucking delicious. As expected. I picked a real winner. I envy that watermelon. It lived up to its full potential. Unlike me. It had one job in life and it stepped up to the challenge. Every juicy bite is tantalizingly sweet. No seeds. No mushy parts. Bloody fucking perfection.

I take a victory lap as they devour the watermelon in the air conditioner vortex I’ve created in the kitchen. It’s like the north pole. Finally, after all these years I’ve made good. To hell what they all (teachers, parents, neighbors, co-workers, randos…etc.) think — I am somebody! I can kinda pick a watermelon and for one brief evening I’m the king of the castle. A hero. Yeah, maybe I’m exaggerating a bit.

But this event — I call it “watermelon zero” — has a ripple effect. Much like the bullet that took down Archduke Franz Ferdinand and started WWI, Watermelon Zero sets off a military campaign with each side claiming they know how to pick the best watermelon. And in war, as we know all too well in this area of the world, there are NEVER any winners. Only losers.

When the memory of “Watermelon Zero” has faded and the oppressive heat of late July suffocates us, even in the aforementioned “air conditioner” vortex, my lovely wife comes home from the supermarket with her offering. A watermelon with just the right oblongitude (is that a word? I’m guessing not by the red squiggly lines. Fuck it. It’s staying in. If Shakespeare could invent words why can’t I?) It has just the right weight and a perfect “field spot.” Looks like Watermelon Zero has stiff competition.

“How much did you pay for it?”
“Thirty three shekels.”
I am such a frier.

In the fog of war, I find myself torn. On one hand I’m stoned AF and would love a sweet, sweet watermelon. I drool at the thought of sinking my teeth into the perfectly firm watermelon. Mmmmmmm… BUT, on the other hand, if this watermelon, let’s call it “watermelon imposteriori” is as sweet as “watermelon zero” and HALF the price, I will never hear the end of it. I will be the frier forever. I will be forced to concede that she knows how to pick a better watermelon than me (in addition to being a better cockroach killer, Ikea furniture assembler, and Dizengoff Center navigator).

An early 40s man, JASON, a cross between a circus bear and Jack Black, is locked in a Mexican Stand-off with his wife, M., early 30s. She is fierce. Unflinching. Neither blinks as they sink their forks into the watermelon. D., a small child of 7, doesn’t look up from his uber-violent Roblox video. The dual air conditioners send tumbleweed across the kitchen.

“Whatever the outcome” I say without lowering my gaze, “let’s be civil. Remember, there are children involved.”

One bite. She spits it out. Tasteless. Too ripe.

Tosses the whole thing into the trash can and goes back to watching “A Handmaid’s Tale.” If she didn’t hate me (and by extension, all men) before, she definitely hates us now.

I don’t take a victory lap. I don’t rub it in her face. I act graciously.

“Close the window! There are two air conditioners on! You’re such a freier!” she screams.

And so ends the great watermelon war of 2018. Much like the war down south with Hamas, I have a feeling it will flare up again next year, and every subsequent year, until we’re too old to bite into watermelon.