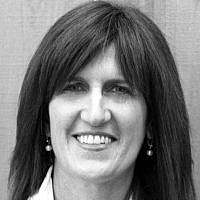 The Blogs
Sharon Rosen Leib
Femimenscht: Jewish feminist/globalist with heart
Apply for a Blog
Advertisement
Please note that the posts on The Blogs are contributed by third parties. The opinions, facts and any media content in them are presented solely by the authors, and neither The Times of Israel nor its partners assume any responsibility for them. Please contact us in case of abuse. In case of abuse,
Report this post. 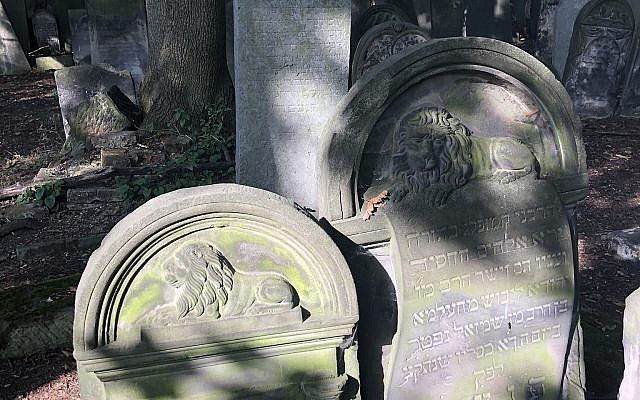 As our plane descended into Warsaw, I felt nauseous hurtling toward a country my maternal great-grandparents fled a century ago.  Yet a sense of urgency to breathe the same pastoral air, walk the same birch forests and seek whatever shreds of Bodner/Wurtzel family history remained propelled me.  The Nazis murdered most of the relatives who stayed behind. I had to face down the past to move forward on a long-delayed writing project.

I expected to discover grim in Poland and I found it. The former Warsaw ghetto’s leafy Jewish cemetery teemed with premature death.  The mild morning sun created a moody display of light and shadow on the intricately carved granite headstones and jumbled marble stela. I felt my lungs work harder despite the bracing, fresh September air. Contemplating the vast number of Warsaw’s World War II Jewish casualties overwhelmed me. 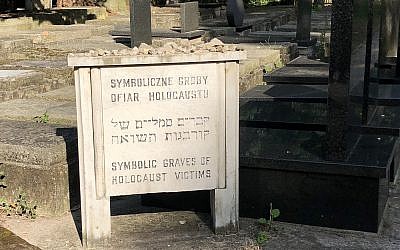 How to process the 100,000 Jews who died of starvation, illness or broken spirits during their first year in the ghetto; the 300,000 deported by train to be gassed to death in Treblinka; and the 50,000 executed point blank?  I tried to visualize how the Nazis crammed so many people into a walled urban compound and then killed them with such efficacy.  The effort strained my imagination to the breaking point. How to mentally recreate the near nullification of Poland’s Jews?

In this time of tribalism and forgetting, I realized Jews weren’t the only ones who suffered.  The Nazis bombed the hell out of Warsaw toward WW II’s end – retribution for the Polish resistance’s audacious 1944 uprising. When VE Day finally arrived in 1945, both Warsaw’s human population and physical infrastructure were shattered.  The city lost 800,000 people (450,000 Jews and 350,000 non-Jews perished) — over half its prewar population. Approximately 85 per cent of Warsaw lay in ruins.

With the help of foreign aid, Warsaw started to rebuild. A small number of Jews returned to their native land.  The victorious Russians took over and Poland fell behind the Iron Curtain until the Soviet Union dissolved in 1989.  Enter the new Polish republic, inspiring hope for a more tolerant social order.  Poland opened up for tourist exploration including Jews of Polish descent like us, returning to learn more about their family heritage.

Taube Jewish Heritage Tours, an outgrowth of the Taube Foundation’s Jewish Heritage Initiative in Poland, launched in Warsaw a decade ago.  Taube designs tours to meet their clients’ interests.  A family shtetl or neighborhood you want to visit?  Taube will take you there.  Anna Szcześniak, Taube’s Warsaw-based Tour Coordinator, patiently answered a lengthy stream of emails from my sister Dina and me and created a detailed itinerary to our specifications.

That’s how my sister, her friend Susan, my husband Rich and I ended up in Warsaw’s Jewish Cemetery under the tutelage of Piotr Hummel, our 27-year-old Polish History Ph.D. student guide. His extensive knowledge of and enthusiasm for Warsaw’s Jewish history impressed us. A non-Jew of German-Polish descent, he helped us comprehend the complex relationship between Jewish and non-Jewish Poles during WW II.

I grew up hearing a lot of dismissive, horrific things about Poles from my grandparents. I appreciated Hummel explaining the Poles’ own anguish during WWII. We learned that in Nazi-occupied Poland citizens caught assisting Jews escape or hide faced summary execution.  Poland was the only occupied country whose citizens were subjected to such harsh punishment.    The Nazis used this law to executed entire Polish families.

My mind opened a little wider.  “It’s complicated,” was Piotr’s oft- repeated refrain.  We began to understand that Nazi-occupied Poland couldn’t be reduced to black and white delineations of good and evil.  Like the Jewish cemetery headstones, Warsaw’s history reflects multiple shades of gray.

While leaving the cemetery, I spotted life-affirming words embedded in the pathway out.  A granite paver donated by a Seattle couple (Holocaust survivors or their descendants?) admonishes visitors not to succumb to despair. During our next two days in Warsaw, I followed the paver’s advice and saw rays of hope beaming through the darkness of Warsaw’s oppressive, funerary history. 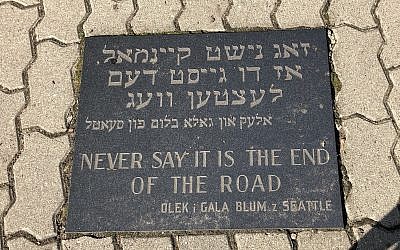 Warsaw’s JCC, a project initiated by the JDC to help revitalize Jewish life, opened in 2013.   “Our role is to be welcoming and inclusive to give everyone an opportunity to explore what being Jewish means to them,” Agata said. The JCC currently has 420 members. Hundreds of other visitors participate in its programs including the Boker Tov (Hebrew for good morning) kosher Sunday brunches; Jewish holiday celebrations; rooftop Shabbat dinners for college students; summer camps for school kids; Hebrew lessons; and workshops in radical acceptance led by a 90-year-old Polish Holocaust survivor.

“We are already outgrowing the building.  After we opened, people started coming out of the woodwork.  Many of them discovered their heritage when a grandparent felt safe enough to admit being Jewish after Communism fell,” Agata said.  She hopes the Warsaw JCC’s physical plant will grow with its membership and become self-sustaining – no longer reliant on foreign donors’ generosity.  “We want American Jews to know we are here and to please come visit. The Jewish community in Poland is growing.  We have at least 6,000 in Warsaw,” she said.

Agata’s fellow community builder Karina said, “When I was hired to teach Jewish culture to kids at camp in 1999, I had to use books from before World War II to educate myself and then create what I wanted to share.” She marveled at the youthful pluck she summoned to pull this off.  “Now I have two kids who have what I didn’t have – a Jewish life that comes naturally to them.  My kids say, ‘I’m Jewish, so what?’” she said with a triumphant smile.

Both Agata and Karina express optimism about the future of Jewish life in Poland.  Firmly rooted in Warsaw’s Jewish community, they take pride in kicking it out of post-Communist darkness into the light.

We visited another brilliant ray of light – Warsaw’s POLIN Museum of the History of Polish Jews.  The POLIN opened in 2014 and has already shattered attendance expectations with well over a million visitors.  The striking, massive, post-modern homage to Polish Jewry won the European Museum of the Year Award in 2016. Located on the site of the former Warsaw ghetto, the museum deploys the latest, greatest technology including interactive touch screens, film clips, sound effects, visual projection and elaborate architectural recreations to trace the thousand-year history of Jewish life in Poland.

The POLIN’s popularity with non-Jewish Poles and visitors from around the globe gave us hope for the future.  Poland’s long arc of Jewish history appears to be bending toward continuity, both spiritually and physically.  Although Warsaw’s history weighs heavily, especially on Jewish visitors, its resurrection demonstrates a buoyant resilience that bodes well for humanity. The road hasn’t ended.

About the Author
Sharon Rosen Leib is an award-winning freelance journalist and longtime columnist/contributing writer for San Diego Jewish Journal. Her work has appeared in the Los Angeles Times, The Forward and Jewish Journal of Greater Los Angeles. She served as a Deputy Attorney General in California's Department of Justice before leaving a life of criminal law to raise her three daughters. A native Los Angeleno, she currently resides in Solana Beach, California.
Related Topics
Related Posts
Sharon Rosen Leib
Comments