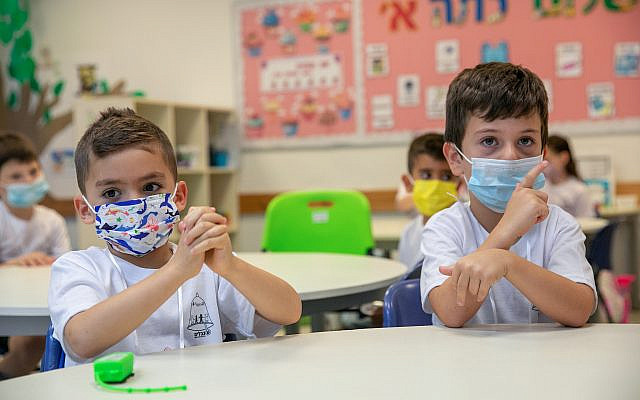 Fןrst graders at the Inbalim school in Modi'in Maccabim Reut on the first day of the new academic year, on September 1, 2021. (Yossi Aloni/Flash90)

In the public policy literature, a wicked problem is characterized as one where there are conflicting values and uncertainties about the impacts of policy options. In other words, if after thoughtful analysis no obvious good alternative emerges — but only varying shades of bad — you have a wicked policy problem on your hands.

As the Omicron variant has come to dominate the local COVID scene, the Knesset’s education committee faces such a problem. Keeping children in classrooms and away from Zoom cameras is a paramount priority: Learning from home yields frustration, loneliness, violence – and very little education for our children. But we also want to protect our children’s health. Much of the relevant data are still unavailable and the situation is volatile, but here’s my current assessment of the options.

Following the US FDA’s decision to approve the Pfizer vaccination against COVID-19 for children between the ages of 5 and 11, Israel decided to follow suit. Five million shots to children in this age group worldwide confirm that any side effects are vanishingly scant. At the same time, as Omicron spreads across the US, the number of children hospitalized with Corona has risen by 50% and now exceeds 2,000. That itself is a real problem — without even considering young children’s contribution to the pandemic as carriers.

Unfortunately, many parents in Israel have not been eager to vaccinate their young children. This remains somewhat bewildering to me. Vaccinations for all sorts of illnesses are a common part of every Israeli child’s experience. From diphtheria and tetanus to measles and mumps — Israeli kids grow up with jabs. But after the Ministry of Health raced to set up new “child-friendly” vaccination stations across the country to combat the highly contagious Omicron variant, medics and nurses there found they had nothing to do. In Arab communities in particular, even though vaccinations were free, parents weren’t buying.

This presents a pressing policy challenge because the mounting COVID incidence around the world leaves little room for doubt: the country faces a Corona wave that will be unprecedented. And this time, children may not be spared. Correctly, the government decided that expanded vaccination coverage was its best defense. The policy challenge, therefore, seems simple: how can we motivate a very large portion of the population — many of whom themselves have already been vaccinated against COVID — to bring their children in for the jab?

The proposed government regulations sent to our Knesset committee for approval seemed logical, at first glance: In order for an infected city’s school system to remain open, 70% of the children need to have had the vaccination. This figure presumably has some epidemiological logic in terms of herd immunity. But the real target is parents who remain complacent about the potentially adverse effect on their children of a bout with COVID. (This complacence is especially indefensible as we learn more about the pathology of long-COVID.) Presumably, these parents are not apathetic about having to miss work or being cooped up in the house with angry kids. The logic of the policy was that by setting a high minimal bar for schools to convene, parents would be nudged to do the right thing.

Nonetheless, when these regulations came before our committee, I argued that while well-intentioned, the proposed government policy is ill-advised and counterproductive. The rules actually send the opposite message to hundreds of thousands of parents.

The present situation constitutes a classic case of the “Prisoner’s Dilemma” dynamic. This well-known game theory model involves two thieves who are taken in for questioning and separated during interrogation. The optimal outcome for  the suspects would be for them both to cooperate with each other and deny the crime. Then they would be released without indictment. But a clever police detective will offer a reduced sentence to each, separately, if they rat out their accomplice, who would then face a higher penalty. Unable to know whether his partner has decided to confess, a rational suspect might take the deal as a prudent, conservative strategy. The problem is that when both of them confess—it produces the worst possible outcome for the thieves.

You don’t need to be a games theory expert to understand that in battling COVID, cooperation produces the optimal outcome for parents ambivalent about vaccinating their children. If everyone brings in their children, all benefit. Unfortunately, many opt to be free riders: let other parents vaccinate their children, in the belief that my child will be able to enjoy the healthier classroom. When this thinking informs the majority of parents, it ends in a worst-case scenario.

More importantly, I explained that the proposed policy punishes the innumerable parents who did the right thing and gave their children COVID shots. Rather than being rewarded for being good citizens, they find that their efforts were in vain. Indeed, this outcome is something that people can figure out in advance.

Rich schools will stay open, poor will be closed

The dynamic is especially true given the disparities that emerged during the pandemic between prosperous and poorer Israeli communities in Israel. Vaccination rates in dispossessed cities like Rahat or even Ofakim remain extremely low, while wealthier towns, like Raananah, Modi’in or Ramat Hasharon can cross the 80% level.

The 70% minimal vaccination rate required for the convening of classes sends the worst possible message to parents from peripheral communities who acted responsibly and responded to the government’s request by vaccinating their children: It doesn’t matter what you do, your children will not be able to attend school because at least 30% of other parents are not so conscientious.

It also means that many more schools in Israel in affluent places will stay open than in poorer places. And this perpetuates the disparities in socio-economic levels and educational opportunities between the haves and the have nots in Israel.

My proposal, which was accepted by the Education Committee and will hopefully be manifested in new regulations to be released by the Health Ministry experts next week, is simple. Let’s apply the Green Pass (“Tav Yarok”) standards to the schools: In red cities, where COVID incidence is high, if a child has been vaccinated, she can attend classes. To overcome concerns about human rights, just like in our stores, unvaccinated children can bring a daily CPR test or antigen results with them and join the class. Otherwise, they can learn via Zoom at home. Only when there are actual COVID cases in a class do we shut it down – and then reopen it as quickly as possible for vaccinated children and those with negative PCR tests.

This approach sends a clear message: Israel rewards citizens who act responsibly to combat the pandemic. And yes – the Israeli government and its schools place additional pressure on those who do not “get with the program” to protect their children and our society. There is no coercion here, but there is a clear signal.

At the end of the day, the immediate public health prospects for Israel and the world remain very unpredictable. We still have not really chracterized the health impacts of Omicron on children. Adaptive Management is a term for designing strategy in times of uncertainty. It defines the present modus operandi. We will all need to be nimble and highly aware of the changing dynamics produced by this relentless disease. Adjusting policies frequently should not be interpreted by the public as a sign of confusion or incompetence. It simply means that decision-makers are doing their jobs intelligently.