The World Council of Churches is led and staffed by people who are so blinkered by their obsession with Jewish power and sovereignty that they have no idea what is really going on in the Holy Land.

That’s a harsh, but reasonable assessment considering the evidence. Looking at the organization’s behavior over the years, it’s impossible to deny that the WCC has enlisted in the effort to make life more difficult for Jews in their homeland. The organization is so committed to this agenda that its leaders and staffers sometimes undermine the welfare of Christians in the Holy Land.

The most recent example of this phenomenon is, helping Archbishop Atallah Hanna, the head of the Sebastia Diocese of the Greek Orthodox Church in Jerusalem to defame Israel.

The WCC came to Hanna’s aid on Jan. 2, 2020 when it issued a press release expressing “profound sorrow and prayers” on his behalf after the Archbishop accused the Israelis of trying to assassinate him. Hanna made this allegation on Jordanian television after a tear gas cannister was fired from an unknown source into his church on Dec. 18, 2019.

In response to Hanna’s accusation that Israel poisoned him, Lior Haiat, spokesman for Israel’s Ministry of Foreign Affairs declared on Jan. 5, 2020 that the charges were baseless and “The accusations that stem from these remarks are redolent of blood-libel.”

In its January 2 press release, the WCC declared that Hanna was “reportedly hospitalized . . . after being poisoned by chemical substances.” The following paragraph states that he “has been a strong critic of Israel and its treatment of Palestinians according to International Law.” The WCC’s implication that Israel “poisoned” Hanna is disgraceful act of dishonesty that others have rebroadcast. By retailing Hanna’s propaganda, the WCC has brought shame onto the churches it represents.

It’s not as if Hanna is a credible source of commentary about life in the Holy Land. The man is an inciter against Israel who has accused Israeli Jews of trying to control the world.

He has promoted the Palestinian right of return and called for the creation of a Palestinian state from the river to the sea in the Middle East. Do the math and that means the destruction of Israel.

He has even offered kind words for the Ahmad Badreddin Hassoun, the Grand Mufti of Syria who, according to Amnesty International, has been deputized by Syrian President Bashar Al Assad to sign off on executions at Saydnaya Military Prison outside of Damascus, where more than 13,000 people have been killed by the Syrian government, most of them by hanging.

Why is the WCC parroting Hanna’s allegations? 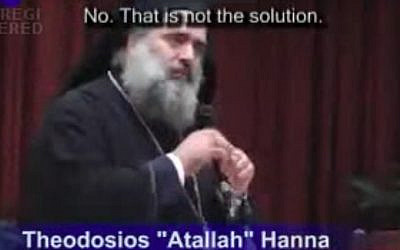 Archbishop Attallah Hanna, head of the Sebastia Province of the Greek Orthodox Church in Jerusalem inveighed against the two-state solution at an event in California in 2008. (YouTube Screenshot.)

The man is not just a “critic” of Israel, as the WCC describes him, but a clergy person who calls for its destruction. Speaking in California in 2008, Hanna told an audience of Arab Americans, “They say the solution is a two-state solution. No. That is not the solution. The solution is one Palestinian state from the sea to the river.” This state would be predicated on the condition, Hanna declared,  “that every Palestinian in exile is allowed to return, including the to the areas occupied in in 1948.”

In this same talk, Hanna declared that “Zionist pretexts” for Israel’s creation “are diabolical and they have no relation to God’s word and the holy books.”

He condemned Christian supporters of Israel. “How can one combine what Christianity calls for with what Zionism calls for?” he asked. “Christianity is a religion and Zionism is a racist terrorist movement.”

He also condemned Western leaders who visited Israel earlier that year, declaring, “Whoever stands by a killer is a killer.” It’s an odd turn of phrase from a man who in 2015, stood by a Christmas tree decorated with images of Palestinian terrorists and who at the 2008 talk declared, “We salute all of our prisoners and detainees,” many of whom are in Israeli prisons because of having killed Israeli civilians.

He also accused the Israeli government, which has negotiated with and made numerous peace offers to the Palestinian leaders of seeking to “liquidate the Palestinian cause.”

Speaking at another event in California in 2014, Hanna said through his translator, “There was a question about Israel [having] a vision of occupying the land between the Nile and the Euphrates. They want to be able to control the world, not just occupy part of the Middle East.”

He also condemned Christians who support Israel for not recognizing who the villain of the conflict is in light of the Christian Gospels. “Those money changers at the temple?” he said. “Those people are the Israeli government who are suppressing us.”

He called on Westerners to boycott Israeli products because “These products eventually kill our children.” Speaking of killing children, Hanna lauded the Assad regime, which has killed thousands of children to prevent the breakup of its country into smaller segments. “Syria is steadfast,” he said. Steadfast? Is that the word a Christian pastor should use to describe a regime guilty of mass murder?

During his 2014 tour in the U.S., Hanna participated in an interfaith dialogue that included the previously mentioned Grand Mufti of Syria, Ahmad Badreddin Hassoun, who appeared in the dialog via skype. Through his translator at the event in California, Hanna reported, “While it was a reasonable hour here, he had to get up at 4 o’clock in the morning to joint us, but it was a really beautiful show of mutual solidarity, mutual respect — none of this talk of sectarianism.”

It’s a strange way to describe a man who, in 2011 warned the United States and Europe not to attack the Assad regime, declaring, “The moment the first missile hits Syria, all the sons and daughters of Lebanon and Syria will set out to become martyrdom-seekers in Europe and on Palestinian soil. I say to all of Europe and to the US: We will prepare martyrdom-seekers who are already among you, if you bomb Syria or Lebanon.” It’s also a strange way to describe a man who has, according to Amnesty International, the authority to have people executed at a military prison camp outside of Damascus.

Why? Hanna is a dread enemy of Israel, an obstacle to peace and normal relations between Arab and Jew in the Holy Land, and an apologist for the murderous Assad regime in Syria. Despite all this, he WCC treats him like a legitimate peacemaker and commentator about Israel. It’s exactly the type of stupidity people have come to expect from the organization.

For example, in 2001, it ran interference for antisemites who hijacked the United Nations Conference on Racism and Xenophobia. The WCC’s delegation to the conference moved for the deletion of a passage of a resolution condemning racism. The deleted passage described “wildly inaccurate charges of genocide, war crimes against humanity, ethnic cleansing and apartheid [against Israel] as a virulent contemporary form of anti-Semitism leading to firebombing of synagogues, armed assaults against Jews, incitements to killing, and the murder of innocent Jews.”

The deletion was approved before Jewish organizations in attendance had a chance to speak.  Nineteen years later, the connection between anti-Zionism and Jew-hatred — which the WCC helped obscure — is indisputable. By protecting the “I’m anti-Israel, not antisemitic” line of argument, the WCC has provided a rhetorical ratline that antisemites can use to escape the consequences of their Jew-hatred. It’s a stupid thing for a Christian organization to do.

More recently, it has brought so-called peace activists from throughout the world into the Holy Land to “accompany” folks like Hassan Breijieh, a spokesperson for the Popular Front for the Liberation of Palestine as he harassed Israeli Jews living in the West Bank. More stupidity.

These same peace activists go back home to demonize Israel, the one country in the region where the local population of Christians is increasing. Upon returning home to South Africa, one activist declared that “the time has come to say that the victims of the Holocaust have now become the perpetrators.” Again, more stupidity.

The organization also supports Yusef Daher, a Palestinian Christian who has demonized Israel and valorized violence against the Jewish state on his Facebook page until he was challenged on this behavior in 2016. Even more stupidity.

As much as the WCC wants to deny it, the organization has been rendered stupid with its obsession with Jewish power and sovereignty. Because of its problem with Jewish power, the organization regularly does obviously dumb things like retailing insane anti-Israel propaganda from people like Bishop Attala Hanna. At virtually every juncture when the WCC has a choice between speaking the truth about the Arab-Israeli conflict and beating up on Israel, it almost invariably chooses the latter.

It’s a disaster and a disgrace.

About the Author
Dexter Van Zile is Christian Media Analyst for the Committee for Accuracy in Middle East Reporting in America.
Comments