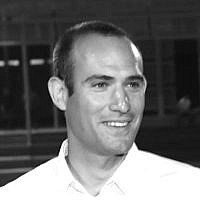 The Blogs
David Lasday
Apply for a Blog
Advertisement
Please note that the posts on The Blogs are contributed by third parties. The opinions, facts and any media content in them are presented solely by the authors, and neither The Times of Israel nor its partners assume any responsibility for them. Please contact us in case of abuse. In case of abuse,
Report this post.

Maccabi Tel Aviv legend and current Israel Goodwill Ambassador Tal Brody’s accented statement after winning Israel’s first European Basketball Championship “We are on the Map! And we are staying on the map – not only in sports but everything,” will forever reverberate throughout Israeli society.

With the 2018 FIL Men’s World Lacrosse Championship, the highest level of the sport, being held in Netanya, Israel, July 12-21, Israel is not only on the map, but the map is coming to us with 50 countries, 2,000 athletes and 8,000 tourists coming to engage with Israel in its 70th year.

This will be the biggest World Championship in history, as the field has grown from 38 to 46 countries since the 2014 Championship in Denver, and will be reduced moving forward with qualifiers for the first time in 2022. This is also the first time the championships are being held outside of an English-speaking country having been hosted repeatedly by the United States, Canada, England, and Australia. With a big push to bring the sport into the Olympics in 2028, the lacrosse world is determined to make this championship the most broadcasted games in history. Games will be televised locally in Israel and to the world reaching 250 million households.

Israel will not only host the games, but is also ready to compete. The Israel Men’s National Team, ranked 7th in the world and 2nd in Europe, looks to win against the best in the world fielding its strongest team and playing on home soil. In five short years of existence, the Israel Lacrosse Association has brought over 500 Jewish lacrosse players from North America to Israel on High School Winter Service Trips, Birthright Israel: Amazing Israel- Lacrosse, (2 buses each summer), and MASA Israel Premier Lacrosse League.

Israel Lacrosse National team players are active role models in the community, visiting schools throughout Israel every day, teaching the game of lacrosse and coaching youth clubs in the periphery (Ashkelon, Sderot. Kiryat Gat, Ashdod, Be’er Sheva, Be’er Tuvia and Netanya). With the Championship in Netanya, the Association is developing teams in Tel Aviv, Ramla, Herzliya, Even Yehuda, Tel Mond, and Kfar Yona.

The 2018 FIL Men’s World Lacrosse Championship also brings a significant impact to Israel’s economy. The overall budget for the event itself is 12 million NIS, including 3 million NIS going into The Wingate Institute, Israel’s National Center for Excellence in Sports, renting facilities and improving fields. Players and fans will take 100,000 hotel nights over their two-week stay in Israel, bringing in over 50 million NIS in hotel tourism alone. Televised games will reach 250 million people showcasing Israel winning on and off the field, with tourism shots coming in and out of commercial breaks.

It’s traditional for the host country to give a gift to visiting teams. The Israel Lacrosse Association will be giving each country the gift of Jerusalem, sending each team on a daytrip to visit the Old City and Yad Vashem. They will train at the new Kraft Sports Complex. Each visit will be filmed and broadcast during the games. The Championship will create an unprecedented amount of influencers to serve as ambassadors for Israel. Teams will hold life skills lacrosse clinics for at-risk youth as well as community-building coexistence clinics for Arab and Jewish youth. Players will leave with real connections to Israel and its people.

The 2018 FIL World Lacrosse Championship will inspire a nation winning on and off the field. On a global scale Israel will lead the world with the biggest world lacrosse championship in history, welcoming and nurturing countries currently developing their lacrosse programs, showing them how they can grow the sport and give back to their communities in the context of “Or Lagoyim.” It will open the door to more championships and major events to be held in Israel. Broadcasts of Israel in a strong and positive light will reach millions worldwide. The event will help to continue to connect people from around the world to Israel, and will inspire children throughout Israel to believe that they too can be champions, not only on the map, but leading the Map. The World Is Coming!