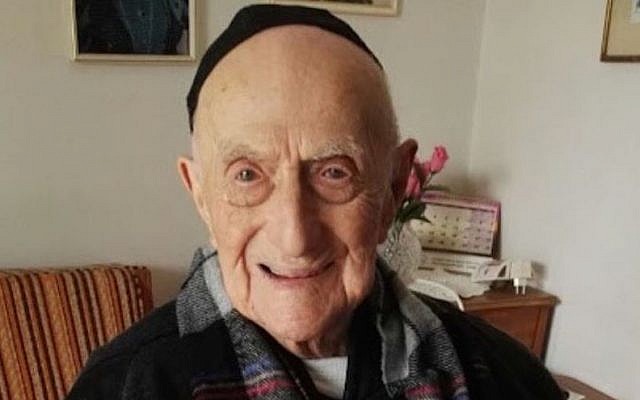 Holocaust survivor Yisrael Kristal, confirmed in March 2016 as the oldest man in the world. (Courtesy of family)

On August 11, 2017, the world’s oldest man passed away, just a month short of his 114th birthday — making him one of the 10 longest-lived men since modern record-keeping began. If you knew nothing else about him than this, you would be justified in thinking that he had led a peaceful life, spared of fear, grief and danger.

The actual truth is the opposite. The man in question was Yisrael Kristal, Holocaust survivor. Born in Poland in 1903, he survived four years in the Lodz ghetto, and was then transported to Auschwitz. In the ghetto, his two children died. In Auschwitz, his wife was killed. When Auschwitz was liberated, he was a walking skeleton weighing a mere 37 kilos. He was the only member of his family to survive.

He was raised as a religious Jew and stayed so all his life. When the war was over and his entire world destroyed, he married again, this time to another Holocaust survivor. They had children. They made aliyah to Haifa. There he began again in the confectionery business, as he had done in Poland before the war. He made sweets and chocolate. He became an innovator. If you have ever had Israeli orange peel covered in chocolate, or liqueur chocolates shaped like little bottles and covered with silver foil, you are enjoying one of the products he originated. Those who knew him said he was a man with no bitterness in his soul. He wanted people to taste sweetness.

In 2016, at the age of 113, he finally celebrated his bar mitzvah. A hundred years earlier, this had proved impossible. By then, his mother was dead and his father was fighting in the First World War. With an almost poetic sense of fittingness, Yisrael died on erev Shabbat Ekev, the parsha that includes the second paragraph of the Shema with its commands to wear tefillin and teach Torah to your children, “so that you and your children may live long in the land that the Lord swore to your ancestors.”

Yisrael Kristal faithfully did both. On his bar mitzvah he joked that he was the world’s oldest tefillin-wearer. He gathered his children, grandchildren and great-grandchildren under his tallit and said, “Here’s one person, and look how many people he brought to life. As we’re all standing here under my tallit, I’m thinking: six million people. Imagine the world they could have built.” This was an extraordinary man.

His life sheds light on one of the most tantalizing verses in the Torah. Describing the death of Abraham, our parsha says that he “breathed his last and died in good old age, old and satisfied” (Gen. 25:8). His is the most serene death in the Torah. Yet consider his life, fraught as it was with trial after trial.

To pursue the call of God, he had to say goodbye to his land, his birthplace and his father’s house and travel to an unknown destination. Twice, famine forced him into exile, where his life was in danger. Promised countless children — as many as the dust of the earth and the stars of the sky — he remained childless until old age. Then God told him to send away his son by Sarah’s handmaid Hagar. And if that trial were not heartbreaking enough, God then told him to sacrifice his only son with Sarah, Isaac, the one whom God had told him would be his spiritual heir and bearer of the covenant into the future.

Seven times promised a land, when Sarah died, he owned not a single square inch of territory in which to bury her, and had to entreat the Hittites to let him buy a field and burial cave. This was a life of disappointed hopes and delayed fulfillments. What kind of man was this that the Torah can say that he died “in good old age, old and satisfied”?

I learned the answer to this question through a series of life-changing encounters with Holocaust survivors. They were among the strongest, most life-affirming people I have ever met. For years, I wondered how they were able to survive at all, having seen what they saw and known what they knew. They had lived through the deepest darkness ever to have descended on a civilization.

Eventually, I realized what they had done. Almost without exception, when the war was over, they focused with single-minded intensity on the future. Strangers in a strange land, they built homes and careers, married and had children and brought new life into the world.

Often they did not talk about their experiences during the Shoah, even to their spouses, their children and their closest friends. This silence lasted, in many cases, for as long as fifty years. Only then, when the future they had built was secure, did they allow themselves to look back and bear witness to what they had suffered and seen. Some of them wrote books. Many of them went around schools, telling their story so that the Holocaust could not be denied.[1] First, they built a future. Only then did they allow themselves to remember the past.

That is what Abraham did in this week’s parsha. He had received three promises from God: children, a land, and the assurance that he would be the father, not of one nation but of many nations (Gen. 17:4-5). At the age of 137, he had one unmarried son, no land, and had fathered no nations. He uttered not a single word of complaint. It seems that he realized that God wanted him to act, not to wait for God to do the work for him.

So, when Sarah died, he bought the first plot in what would become the Holy Land, the field and cave of Machpelah. Then he instructed his servant to find a wife for Isaac, his son, so that he might live to see the first Jewish grandchildren. Lastly, in his old age, he married again and had six sons, who would eventually become progenitors of many nations. He did not, except briefly, sit and mourn the past. Instead he took the first steps toward building the future.

That, in his own way, is what Yisrael Kristal did — and that is how a survivor of Auschwitz lived to become the world’s oldest man. He too died “in good old age, old and satisfied.”

That is what the Jewish people did collectively when, a mere three years after standing eyeball-to-eyeball with the angel of death at Auschwitz, David Ben-Gurion proclaimed the Jewish State in our people’s ancient homeland, the land of Israel. Had world Jewry sat passively and wept from then till now for the murdered generations of European Jewry, it would have been an understandable reaction. But it did not. It was as if the Jewish people had said collectively, in the words of King David, “I will not die but live” (Ps. 118:17), thereby giving testimony to the God of life. That is why the West’s oldest nation is still young, a world leader in life-saving medicine, disaster relief, and life-enhancing technology.

This is a transformative idea. To survive tragedy and trauma, first build the future. Only then, remember the past.

[1] For two fascinating portraits of how encounters with the Holocaust and its survivors were transformative for young Americans, see the films Paper Clips (2004) and Freedom Writers (2007).