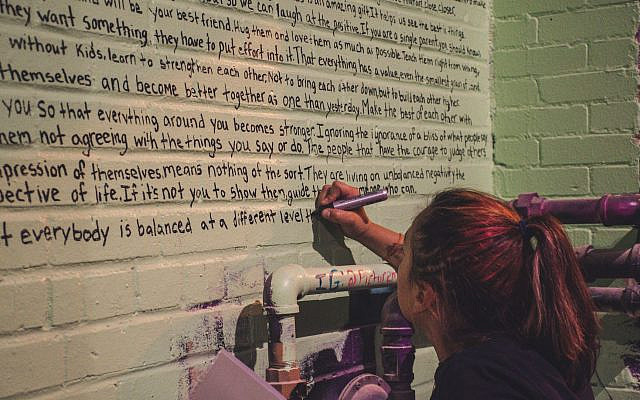 The writing is on the wall – literally. Crowds of anti-Semites, anywhere between 20,000 and 100,000, gathered near the Israeli embassy in London holding placards denouncing the Jewish state for defending itself against an implacable enemy.

There was no major police presence. Perhaps they do not know that there is a UK statute that forbids hateful, threatening, or abusive speech. Although this includes targeting a person on account of disability, ethnicity, nationality, race, religion, sexual orientation, or skin colour, it does not seem to include Jews. The message is clear- Black lives matter, Jewish lives don’t. Among the demonstrators was Jeremy Corbyn, once the leader of the UK’s Labour Party and a notorious anti-Semite.

Their unquestioning hate is encouraged in the UK’s popular newspaper, The Telegraph. We read the headline:
“Bomb attack – Israeli military targets home of Gaza’s Hamas leader”
This is followed by the line:
“Many injured in heavy bombardment overnight”
The casual reader will draw the obvious conclusion that the many injured are Arabs in Gaza whereas, in fact, they were Israelis (both Jews and Arabs) in Israel.

Another rather disingenuous article tells us “Residents of Tel Aviv and Gaza share their experiences of the last week of violence”. There is nothing to share. They attacked us, we defended ourselves.

Years of ingrained antisemitism now meet with the many Muslims who have made their way into England, some legally, some not. England, once home of the English, now has about 3 million Muslims. Understanding where Britain is going, seeing the writing on the wall, some 5,000 British people convert to Islam every year. Meanwhile, the Jewish population is under 300,000 and falling.

It is time for the Jews of England to wake up; they are living in a country that hates them. Fortunately, they have a home to come to; Israel is waiting for them.
It is time to change the traditional ending of the Passover service from Next Year in Jerusalem to This Year in Jerusalem.

Next year will be too late.