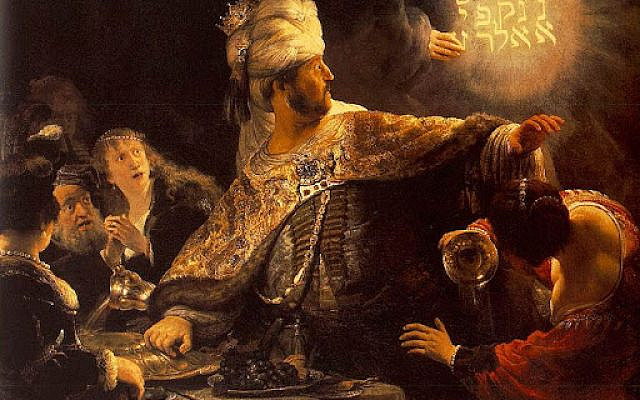 Sir Winston Churchill, who had participated in the First Great War, as First Lord of the Admiralty and later as Chancellor of the Duchy of Lancaster, in his World War I history book, “The World Crisis”, referred to the biblical reference to the writing on the wall as follows: “There was a time when the sinking and service entry curves revealed by our charts looked like “Mane, Tecel, Fares” written on the wall”. Churchill referred in this way to Britain’s vulnerability in the face of submarine warfare (U-Boat Campaign) waged by the German Empire.

Likewise, the painting by the incredible Dutch painter Rembrandt, entitled, “The Feast of Balthasar” from 1635, revives the mythical scene that took place in the Babylonian court of Balthasar, when a mysterious hand emerges and writes an enigmatic message on the wall: “mene, tekel, ufarsin” (מנא, תקל, ופרסין). That hand, is none other, than the hand of God. The words written in Aramaic mean “a mina, a shekel and two half minas”.

The hand of God appeared unexpectedly and as so rarely in history, for Balthasar of Babylon set out to use the vessels of the holy temple in Jerusalem, which had been plundered by Nebuchadnezzar II, when Babylon invaded and exiled the people of Israel. The transgression of using the gold and silver vessels of the high priests of the Eternal did not take long to be punished.

Before the mysterious appearance of a hand in human form and even more mysterious writing in Aramaic, in a Babylonian court, no one noticed the riddle that did not belong to their world, but that fell into their fate. There was only one man capable of interpreting that message, and that was the pious nobleman of Judah; and the most important figure of the Hebrew people in the Babylonian exile, Daniel. His name meant “God is my judge”, although the Chaldeans had called him Belteshazzar, meaning “protect the life of the king”.

Daniel told Balthasar and his court that the writing on the wall meant: Mene, “God has numbered your kingdom and put an end to it”; Tequel, “you have been weighed in the balances and found wanting”; Upharsin, “your kingdom has been broken and given to the Medes and Persians”. The wise and upright Daniel was not mistaken, and that very night, Babylon was invaded by Cyrus II “the Great” in 539 B.C.E. And, with Cyrus II, Israel would return from exile to the land promised to its patriarch Abraham.

In the same way, the expression “the writing on the wall” refers to any situation that foresees an inexorable misfortune, although in the Spanish language it is almost non-existent, which means it is not alien to our reality. Well, what happened in Peru with the rise of Castillo was an imminent misfortune, as was the Chilean case with the plebiscite to reform the constitution, and a rise of the left in Colombia would be the same, especially knowing how disastrous the “paro” was. Another peremptory misfortune was the triumph of the senile Biden in the United States, and we are already beginning to see the international havoc.