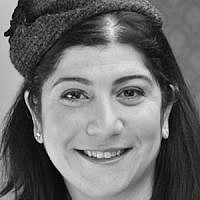 The Blogs
Sharon Weiss-Greenberg
Apply for a Blog
Advertisement
Please note that the posts on The Blogs are contributed by third parties. The opinions, facts and any media content in them are presented solely by the authors, and neither The Times of Israel nor its partners assume any responsibility for them. Please contact us in case of abuse. In case of abuse,
Report this post.

“Are you going to fast on Yom Kippur?” “Are you going to try not to eat until chatzot, midday?” These were the questions my friends and I were discussing around the age of 10 and 11. We had never considered that there would be a period of time in our future when we would have to ask those questions again. As an 11-year-old, I proudly shared that I fasted before I was obligated. It wasn’t until over a decade later that I would begin grappling with these questions again.

Although the questions remain the same, the circumstances and process for coming to an answer has changed. As a child, I did not ask a rabbi what I should be doing. I knew the general custom and practice among my peers, and made my own decision accordingly. I did not feel an ounce of guilt if I broke my fast early. Ironically, the process looks very different for adult women who are either pregnant, nursing, or trying to conceive.

Two years ago, before Yom Kippur, Maharat Rachel Kohl Finegold, who has spoken on this issue in the past, published “Pregnant and Nursing Women Fasting on Yom Kippur-Reflections” on Morethodoxy.

This piece followed her shiur, “Fasting for Two: Who Makes the Call?” which was published JOFA’s Torch blog before Tisha B’Av. Her shiur spurred a great discussion on my personal Facebook wall. Women shared stories of reluctantly fasting, nervous of the effect that it would have on their unborn children or their nursing supply. I recall one woman in particular giving an hourly update of the wails of her nursing child. She had decided that since her child was almost 1-year-old, and eating supplementary food, that she would fast. For whatever reason, her child was refusing solid food on that particular day. The mother had made her decision before the fast, and despite the change in circumstances, would not revisit her decision. It was painful to read her account on that day.

We all make our own decisions of what to eat when pregnant, how to exercise, what to exclude from our diets, whether or not to nurse, etc. Fasting while pregnant or nursing seems to be a decision unlike others. This is one area with which many observant women, throughout the spectrum of the Orthodox community, grapple and are left feeling uneasy no matter the outcome. Guilt is always the result. Women feel guilty for “breaking the fast early” or for not properly nourishing their children. Even if breaking the fast entails eating according to defined shiurim (a halakhic measurement of food permissible according to biblical law) once an hour, the guilt remains. If one chooses to fast for the duration, the guilt remains.

One cannot ignore the spike in pregnant women being admitted to the hospital during and following Yom Kippur. While it may be “okay” to fast while nursing, it can, and has, lowered or diminished milk supply for many women, including a number of women that I know.

A good friend of mine was eagerly following the Facebook discussions born from Maharat Kohl Finegold’s shiur. She had already been nursing her then 9-month-old, and decided to fast on Tisha B’Av. She knew that she wanted to wean him in the coming months, and figured that it would seem inauthentic to eat on Tisha B’Av with that in mind. She was uncomfortable because she felt as if she was trying to rationalize why she should not have to fast without any strong support for this decision. This led to her coming to a stringent decision to completely abstain from water and food throughout the fast day. While she had been nursing her child three to four times a day, her child refused to nurse from the 10th of Av and on. She is not positive why it ended, but, most likely, it was because her milk supply had diminished. Anecdotally, my friend’s story is far from unique.

As children, we were confident in our decisions whether or not to fast, because we were not halakhically obligated. As noted in the articles cited below, there are both halakhic and health factors that mothers should take into consideration. Just as mothers research strollers, baby gear and the like, we should put effort into researching and coming to a decision on whether or not to fast. Mothers asking this question should read the articles mentioned below and think about this decision in advance of the fast day. Making the decision at the last minute contributes to a sense of uneasiness and urgency.

Some suggestions to make the fast easier:

It is time for us to recognize that our bodies and our children are holy vessels. The same way that we make decisions about where and how to pray, what minhag, custom, to follow, and how to observe halakha, we need to take ownership over this decision.

It has pained me to read and hear the words of women sharing their level of pain or discomfort, or the cries of their nursing children who are hungry.  Women who ask rabbis whether they should fast are sometimes told to fast until they become sick or until it would affect their milk supply. Most women, most people, cannot answer that.

The halakhic process is best lived out when we are in dialogue with modern medicine, attuned to our own health needs and have access to well trained, compassionate, and knowledgeable poskim and poskot, halakhic decisors. There is an ever expanding network of maharats, rabbis, yoatzot halakha and other klei kodesh, spiritual leaders, who welcome a genuine and mutual conversation on these important and sensitive subjects. When we, as women and mothers, are empowered in this conversation the entire halakhic process benefits.

‘Does Fasting Put Pregnant Women at Risk?’
BabyCentre on Fasting in Pregnancy
Doctors: Fasting during all but last weeks of pregnancy increases risks
Effect of a 24+ hour fast on breast milk composition
Fasting on Yom Kippur During Pregnancy by Hannah Katsman
Impact of maternal fasting during Ramadan on growth parameters of exclusively breastfed infantsJournal of Fasting and Health. 2013;1(2):66-69
Teshuva from Rav Nachum Rabinovitz, Rosh Yeshiva of Maaleh Adumim

The above was originally posted on JOFA’s Torch Blog.

About the Author
is Director of Education Partnerships for My Jewish Learning. She is the former Director of Development and Communications at ELI Talks and former Executive Director of JOFA, the Jewish Orthodox Feminist Alliance. Sharon also has served as the Rosh Moshava (Head of Camp) at Camp Stone, as the first Orthodox woman chaplain at Harvard University, and as a day school educator. She earned her doctorate at New York University. Sharon is an alumna of the Wexner Fellow/Davidson Scholarship graduate program and a Schusterman ROI Member. She studied at The Drisha Institute for Jewish Education and received her B.A. and M.A. from Yeshiva University.
Comments