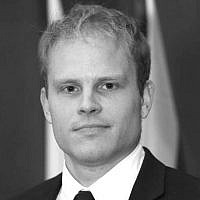 The Blogs
Jesse K. Sultanik
Apply for a Blog
Please note that the posts on The Blogs are contributed by third parties. The opinions, facts and any media content in them are presented solely by the authors, and neither The Times of Israel nor its partners assume any responsibility for them. Please contact us in case of abuse. In case of abuse,
Report this post.

Most of the factions in today’s World Zionist Movement are led by an Israeli political party or a specific religious stream that uses the Zionist Movement and its institutions (the “National Institutions“) to advance their agendas. It wasn’t always this way.

Before the founding of the State of Israel, when Zionism was the strongest unifying force in the Jewish world, the General Zionists (GZ) were among the largest factions of the Zionist Congress. This was thanks to the leadership of the heads of many Zionist Federations who made great efforts to unite their country’s entire delegation and to join together with other country delegations within a General Zionist faction.

This was good for the Zionist movement in a number of ways: GZ delegates are more committed to the mission of Zionism rather than to a narrowed or sectoral interest of a party or stream; the needs of Jewish communities are better served as the GZ agenda is defined by world communities, not according to the directives of political or religious leaders; and many times the heads of Zionist Federations also serve as leaders in their local Jewish Community (a common feature of European society where religious institutions receive government subsidies to support activities), making them particularly well suited to liaise with local authorities and to rally support in the community.

Today, as many average Jews lack touchpoints with the National Institutions and hear stories of their highly politicized and religiously oriented activities, they question the need for a Zionist Congress in the first place. That question becomes even more relevant as the negotiations between the factions increasingly function merely as an extension of Israeli politics; a backwater for the Prime Minister and for Knesset lawmakers to make appointments and fight out political vendettas. Furthermore, the broad influence of the religious streams in the WZO leads to budget allocations that have nothing to do with Zionism and incentivize a “hunker down” approach where someone’s gain is another’s loss.

There’s no doubt that the existence of the State of Israel embodies the primary achievement of the objective for which the Zionist Movement was set up. However, it does not represent the end of Zionism or eliminate the need for a Zionist Congress. As the platform of the General Zionists states:

Indeed collaboration between the movement and the State can only benefit World Jewry and contribute to the welfare of us all. But a distinction must be made between Israeli politics and Zionism. Here again, the GZ program is instructive:

“…only the citizens of the State have the right to determine the political, economic and social complexion of their daily lives and…[the General Zionists] affirm the principle that there shall be no identification of the movement with any political party within the State. Only in this way will it be possible to avoid the strife over problems which are within the exclusive competence of the citizens of the State, and allow for the greatest concentration of energy and time on those tasks which must be undertaken for the strengthening and development of Israel and [the Jewish world]…”

Zionism is not limited to the establishment of the State. It is an ongoing mission that must evolve with the times. For our generation that mission can take many forms; support for the state, engagement with its citizens, partnering with its businesses and organizations, and developing next-generation tools for education and more. Zionism should be the greatest rallying point and unifying force for the world’s Jews.

Yet it’s hard to emphasize how damaging it is for Zionism and the National Institutions when a Diaspora delegate joins a faction led by an Israeli political party or a religious stream. Why should groups who serve specific political or religious agendas define what’s best for Zionism in the world? We need not settle for this undesirable status quo. The vision of pure, uninhibited Zionism is achievable and has led individual delegates, Zionist youth movements, Jewish organizations and the heads of Zionist Federations to join in the GZ faction. And Congress delegates should reflect back and make a choice.

Overcoming the powers that be and reforming the system will require bold and uncomfortable decisions. The parties and streams are well established and command large numbers that can be appealing for delegates, especially those first time Congress participants. But the Zionist Congress is not a referendum on Israeli policies nor is it about pushing one religious stream over another. It is a one-of-a-kind forum that brings together hundreds of Jews from over 30 countries which should be the epicenter of forging global strategies around the opportunities and challenges in our world.

To this end, I encourage all delegates to the 38th Congress to reevaluate their affiliation with Israel-led political parties or specific religious streams, if only to consider the merit of General Zionism. Your personal reflection and asking tough questions of your leaders is a welcome first step. Each and every one of you are also welcome to exercise your democratic right and join the General Zionist movement at this upcoming Congress.

A General Zionist’s ultimate metric of success is the welfare, progress and prosperity of the Jewish people. Join us and help forge a meaningful future for Zionism where parochialism and petty politics are a thing of the past!

About the Author
Jesse K. Sultanik is co-chairman of the Confederation of General Zionists. He is a regulatory and business development expert in the fields of motor vehicle cyber security and future mobility.
Related Topics
Related Posts
Comments