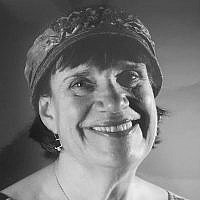 The Blogs
Barbara Freedman
Apply for a Blog
Advertisement
Please note that the posts on The Blogs are contributed by third parties. The opinions, facts and any media content in them are presented solely by the authors, and neither The Times of Israel nor its partners assume any responsibility for them. Please contact us in case of abuse. In case of abuse,
Report this post.

The Tayelet is my favorite place in Jerusalem. Especially during the Corona lockdowns it was a place of almost daily pilgrimage. Now, on most days there are families and individuals walking, Jews and Arabs, sometimes groups on tour or on Segways. It is a place of breathtaking beauty, where you look out at a peaceful (halevi!) view of Old and New Jerusalem, Arab and Jewish communities, Jewish, Moslem and Christian holy places.

A few days a year, however it becomes transformed. On Erev Tish B’av the grassy knolls are marked with groups sitting and reciting Eichah to the light to flashlights and cell phones. On Yom Yerushalayim there is a musical Hallel with hundreds coming to pray and sing together. However, the glory of the Talyelet comes alive especially at the Sigd celebration as thousands of Israeli Ethiopians gather in prayer and friendship. The plaza a is set aside for the prayers of the morning and there are video screens to broadcast the service for thousands who attend. The religious leaders, the Kesim (with their magnificent colorful umbrellas), lead the prayers and the reading of the Orit as thousands respond with uplifted palms in prayer. Many of the women are in traditional dress and some bow and kiss the ground. It is a day of affirmation of accepting the law, and a day of forgiveness and prayer. It is a day of Emunah (faith) and longing for Jerusalem.

For perhaps hundreds of years years the Sigd was celebrated on mountain tops in Ethiopia. The Jewish community would gather there, as they now can do here. But then Jerusalem was a dream for them and now it’s a reality. The event is inspirational, but the story is far greater than a prayer service which had been maintained in Ethiopia despite hundreds of years of isolation and severe persecution.

The story is one of an incredible Zionist narrative. It is a story of pure selfless dedicated love for Judaism and Jerusalem. The first attempt at Aliyah of Ethiopian Jews was in 1869, 12 years before the Zionist congress! The Jews there never heard of Theodore Herzl or political Zionism. Zion was a part of their religious identity. As Jews they suffered persecution and ostracism. They maintained their Jewish traditions under the most difficult circumstances, some believing they were the last Jews left in the world, and yet always yearning for Jerusalem. The tremendous sacrifices involved in trying to reach Israel -walking to Sudan, the suffering, poverty, starvation and illness in the refugee camps and along their journey, and the thousands who died along the way – are testimony to an extraordinary Jewish community.

The majority of Israeli-Ethiopians have been born in Israel. Initially I was surprised to learn that many did not know the stories of the suffering of parents and family members in their journey to Israel. At the Sigd I saw parents showing their children posters and explaining to them how they came in Operation Moshe or Shlomo. I learned that many parents didn’t want to expose their children to the stories of hardship and suffering. This resonated with me as a child of holocaust survivors who also didn’t want to tell their story. I thought about my grandparents who also dreamed and prayed for Jerusalem.  They lived in Rumania and in Czechoslovakia and were murdered in Aushwitz.  Recently, more stories are being shared and this is an integral part of the rich tapestry of Jewish history – inspirational narratives of faith and love of Jerusalem which are the essence of the Jewish soul.  This is the Zionist narrative.

In modern times we are privileged to witness the ingathering of exiles and the realization of the words of the prophets. I wanted to recite the “she’hechyanu” prayer -thanking G-d for the wonder of this moment. Yesterday the Tayelet reverberated with prayer and song and life! Young people gathered in discussion groups, women in traditional dress and prayer, Kesim with their colorful umbrella, families, religious and secular, young and old from all over the country, friends and family greeting each other -gathered in Yerusalem – Jerusalem- Yerushalayim -the city which unites us all.

About the Author
Barbara Freedman is a Jewish educator and English teacher who came on aliyah from Montreal nine years ago. She is a mother of four and grandmother of fourteen. She is busy with volunteer teacher with One Family, Tochnit Maayan at Nishmat and JACC as well as volunteeting with Tahel (Religious Women's Crises Center) as well as teaching a class in Navi and studying at Matan and with other scholars.
Related Topics
Related Posts
Comments