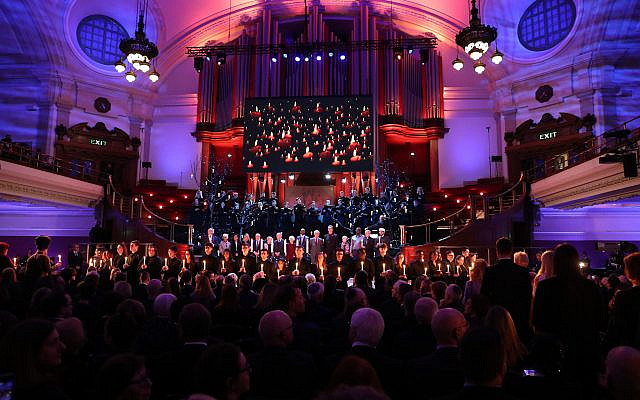 Much of the last year, particularly the weeks heading into the general election, felt painful. It was the first time in my adult life that the stain of antisemitism felt so close.

Working, as I do, on mid-market national newspaper which plays a big part in setting the tone of the public debate, it felt strange that one’s own identity as a Jewish person was the centre of the dialogue.

I felt as if I had insight into what was happening but wanted to be detached. Let others do the arguing. Only when Chief Rabbi Ephraim Mirvis made his intervention did I feel compelled to write of how he has tapped into the forebodings of the whole community.

Even then, in the back of my mind, there was always the thought that even though I felt strongly about Labour’s sometimes unconscionable attitude towards Jews in Britain and Israel, it was better to steer clear.

This was a secular battle, fought on the hustings and in the social media. It also was a private quarrel about me, my family and friends. I found it better to stand back and concentrate on the economic arguments of the campaign. That saved me having to harvest the disquiet of all those I know on an issue gnawing away at their very being.

When it comes to the enormity of the Shoah and commemoration of the 75th anniversary of the liberation of Auschwitz by Russian forces, it feels very different. There has been some comment in the Jewish media about Holocaust commemoration being overdone – somehow caught up in an exercise of global one-upmanship.

There has also been the suggestion that 27 January (the secular Holocaust Memorial Day) takes away from Yom Hashoah, the day of Israeli remembrance, on the eve of independence celebrationsI would beg to disagree. The last week or so, as I have stood or sat through many commemorations, have been awe inspiring. The stars of the show are still the survivors and refugees, many of them as spritely and mentally alert as ever, with the confidence to publicly bear witness.

In the days of my childhood and youth, in the 1950s and 1970s, when the Shoah was so much closer and the abominations so fresh the Holocaust was not a subject for public discourse. That era has long gone.

This year, thanks to Roman Abramovich, Chelsea Football Club and Jewish News, the first event of remembrance I attended was at Stamford Bridge. A stand-high mural of three different footballing lives, cut horribly short, by the Holocaust was unveiled. Current players, from the men and women teams, spoke from their hearts of the horrors of the Shoah and how eradicating antisemitism was a cause wholehearted embraced.

Among all the speeches at the Yad Yashem commemorations in Israel I found the one by Prince Charles the most uplifting. His presence in Jerusalem, where he recounted the memory of his own grandmother Princess Alice of Greece,  remembered among the righteous of the nations – was emotive. It wisely stood clear of the political content of other attendees including Mr Netanyahu.

As the heir to the throne and de facto inheritor of most of his mother’s duties, it spoke more to me than all the other heads of state together. The royal presence at Auschwitz and at the HMD event in central London underlined the real bond between the monarchy and the Jewish people.

Shoah remembrance makes me feel maudlin. The sound of the memorial prayers El Maleh Rachamim – with the names of the death camps woven in – and the memory of the lost lives in my own family is very vivid although I never knew them: my grandparents Sandor and Fanya who died at Auschwitz and my uncles Daniel, Joseph and Ignatz whose fate and that of their families is still unknown. Their memory makes me weep for a lost world.

More real are the reminiscences of my father’s siblings who did survive. His brother Martin (who died in Israel) and two sisters Rosie and Sussie and a niece Shindy who live-on. Their spirit is indomitable (even in great illness) and a living rebuke to those who would diminish the death of six million.

Holocaust Memorial Day means their rebirth and fulfilled lives – like those of other survivors – is an inspiration. It is the ultimate rebuke to those still seeking to hoist the flag of antisemitism.