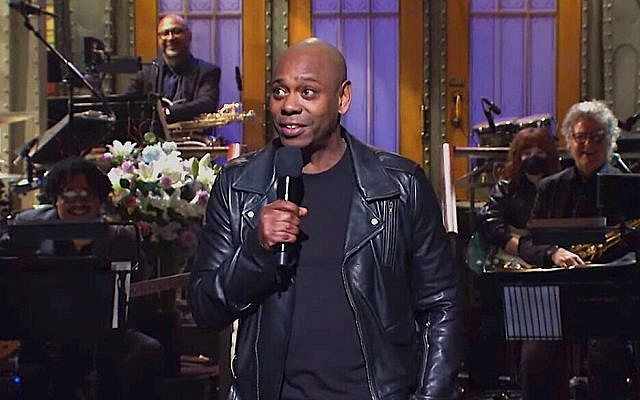 Dave Chappelle is right. There ARE a lot of Jews in Hollywood. There are also a lot of Jews on Wall Street, and in real estate, and in medicine, and in academia. Chappelle stated a fact in his recent SNL monologue. No need to get ruffled or bent out of shape.

Of course, there may have been a certain innuendo in Chappelle’s factual statement. It may have seemed as though he was justifying Kanye’s antisemitic outburst or Kyrie’s antisemitic post. There is a risk in doing so, even if it is only in the context of satire or humor.

The implication is that Jews have a disproportionate degree of control and influence, and therefore they should be subject to critique when their power is wielded unfairly. This is not an unreasonable assertion. Those in power should indeed be liable to criticism and censure. The problem is when that criticism is focused on one’s race, religion, or ethnicity. At that point, the commentary becomes bigotry and bias.

Dave Chappelle may be correct in alluding to the possibility that Kanye has valid complaints against those Hollywood powerbrokers who have somehow manipulated or stifled either his career or the career or other artists with whom he is acquainted. To go “DEATH CON 3 on the Jews,” however, is patently antisemitic, even if some of those with whom Kanye has authentic gripes happen to be Jewish. And to offer justification for such bigotry is certainly problematic.

This is not to say that Chappelle’s social commentary is analogous to Kanye’s blatant antisemitism or to Kyrie’s irresponsible posting of discriminatory materials. Rather than knee-jerk accusation and overreaction, it is worth responding to Chappelle’s comments rationally and objectively.

Are there a disproportionate number of Jews in Hollywood? Yes there are. Jews comprise 2 percent of the population of America and 0.2 percent of the global population. Without precise data, it would be easy to guess that 20% of studio executives, managers, and talent agents in Hollywood are Jewish. It’s possible that that number is significantly higher, but even at 20%, that would be ten times the national percentage.

Why are there so many Jews in Hollywood? From a historical perspective, that could be attributed to the fact that the movie industry was founded by Jews. As Neal Gabler wrote in his detailed history “An Empire of Their Own: How the Jews Invented Hollywood,” the American entertainment industry was “founded and for more than thirty years operated by Eastern European Jews.” Unwelcome in more established American industries in the early part of the 20th century, Jews created a new enterprise with no barriers to entry. Gabler goes on to describe how the studio system that still runs Hollywood today was constructed by the next generations of Jewish movie tycoons. While the industry has diversified over the succeeding generations, the preponderance of Jews in Hollywood is a holdover from its heavily Jewish origins.

Yet this historical approach does nothing to explain why there are such high percentages of Jews in leadership positions in other industries that were not similarly founded and managed by Jews from their inception. Why are there so many Jewish doctors, lawyers, bankers, inventors, entrepreneurs, celebrities, media personalities, etc.? Why have 23% percent of Nobel Prizes been awarded to an ethnic group that is only 0.2% percent of the global population? Is there some secret cabal that makes success more accessible to Jews? Some shadow organization that wheels and deals behind the scenes to assure that positions of power will be filled by members of the tribe?

If there is, my invitation must have gotten lost in the mail. Anyone who believes that such secret institutions exist is mired in conspiracy theories that have no evidence and no foundation in reality.

The answer to what we might call Jewish disproportionality can be approached from two perspectives: a cultural perspective and a theological perspective. From the cultural vantage, it has been suggested that Jewish success can be attributed both to the values of being Jewish and the challenge of being Jewish. Jews have historically been known as the people of the book, and there has always been a premium placed on study and diligence. The nature of Jewish texts like the Talmud stresses painstaking analysis and the careful consideration of multiple sides of every issue. This analytical approach and its concomitant persistence have certainly proved to be an attribute for success in academics, the sciences, law, technology, and a number of fields in which Jews have outperformed.

The challenge of being Jewish is the antisemitism – often blatant and sometimes more subtle – that has dogged the Jews for millennia. Contending on an uneven playing field has fomented a fierce work ethic and a tenacious desire to beat the stacked odds. The result of these cultural factors is that Jews have worked harder because they are required to, both by their own tradition and by the societies in which they were unwelcome.

Beyond these sociological explanations, there is the theological approach, the notion that the Jews bear some divine favor. In other words, they are the “Chosen People,” selected by God and therefore provided heavenly protection and advantage. Unsurprisingly, such an idea has made the Jews few friends. It is not difficult to understand why this type of favoritism would engender feelings of animosity and envy.

Yet the concept of “chosenness” is misconceived by both the majority of Jews as well as their foes. Many Jews, in fact, reject the idea of being chosen because they find it as unsavory as those who resent them for it. Why, if God is just and loving and kind, would He privilege some of His children over others? Not only is this unfair, but it is bound to create rivalry and indignation.

Imagine it this way: God created humanity and all of the various aspects of the universe. After several generations, his children had spread across the earth and they were not familiar with their shared heritage or their singular divine source. Wishing to remind them, God approached one of His children and said, in essence, ‘it is very important to me that each member of this growing family knows where they come from and how precious they are. Therefore, I am giving you this book which traces our family tree to the very beginning and includes the deep wisdom that will enable you all to cooperate and collaborate in order to protect and perfect this world that I have created for you.’

As tradition has it, Abraham was a shepherd who was chosen for this mission because of the intricate care and concern he displayed for even the most wayward and insignificant of his sheep. His mission was passed down to his children through the generations. The Jews were thus chosen not for privilege or for honor, but for the duty of informing all of the people of the world that they are children of God and that we are all ultimately one family deriving from one source.

According to this theological explanation, the reason that Jews have occupied positions of leadership in so many fields is because there is a drive within them, inherited from their forebears, to be “a light unto the nations.” Sometimes this drive is misused or even corrupted. There is no question that there are Jews, like all other people, whose positions of authority have led them astray. It is common knowledge that wealth, fame, and power have the tendency to pollute one’s judgment and amplify one’s ego.

All of which leads us back to Hollywood and the Jews there who may or may not have wronged Kanye, Kyrie, Dave Chappelle, and any number of other celebrities who have had to deal with agents, managers, lawyers, producers, and the multi-billion dollar business of entertainment.

Are all of the Jews in Hollywood people of integrity? Certainly not. Are all of the non-Jews in Hollywood people of integrity? Certainly not. The problem is when one’s lack of integrity becomes an indictment of all of the members of that person’s religion, race, or ethnicity. Sadly, this type of bigotry exists, not only against Jews, but against blacks, Asians, Moslems, and all other minority groups. Yet antisemitism has seen a precipitous rise in recent years. The ADL reported that antisemitic cases “reached an all-time high in the United States in 2021,” marking a 34 percent increase from the previous year.

The answer is not to stifle discourse or to immediately cancel anyone who dares to utter any mention of “The Jews.” As Chappelle drolly and insightfully pointed out, it doesn’t ever seem to work out well for anyone who publicly puts the two words “the” and “Jews” together. While blatant bigotry like Kanye’s needs to be swiftly condemned and countered, Chappelle’s brand of social commentary is worth engaging.

Jews need not deny the facts of our leadership in entertainment and a variety of other fields. On the contrary, we should appreciate the freedom in America that has enabled us to excel. We should correct misconceptions and combat antisemitism, but we must simultaneously hold accountable those of our co-religionists who are abusing their positions of power to exploit those subordinate or beholden to them. We should not be beyond scrutiny or reproach, and we should not hesitate to welcome constructive critique.

Ultimately, we must ask ourselves what we are doing with any of the positions of leadership that we are fortunate enough to occupy. Are we capitalizing on them for personal gain, or are we utilizing the influence with which we have been blessed in the service of the mission that we have been assigned, uniting all of God’s children and radiating light wherever it is dark.

Derived in part From YOU, an introduction to the deepest depths of the human experience based on the esoteric teachings of Torah.  www.pneihashem.com