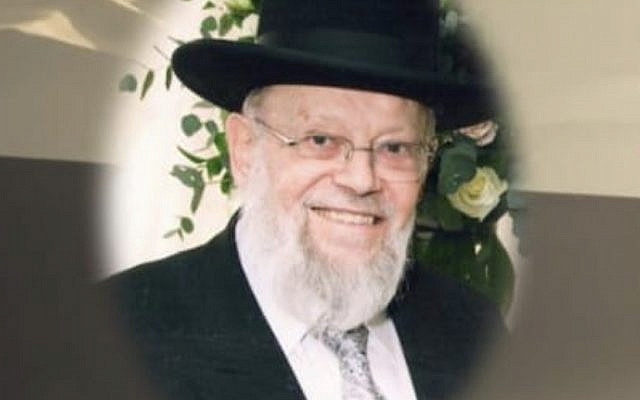 A week after the passing of Dayan Chanoch Ehrentreu ztl, we all still feel a tremendous and personal loss with huge sadness and pain.

The Dayan was a giant of a figure in UK and European Jewry for some 40 years and was a true symbol of Torah and Derech Eretz.

Born in Frankfurt in December 1932 to Rav Yisrael Ehrentreu, who was the son of the Munich Rav, Reb Chanoch arrived in Britain from Germany, immediately after Kristallnacht with his family.

He attended school in Letchworth Garden City and after the war, studied at Gateshead and then Sunderland Yeshiva. Reb Chanoch married Rochel, a sister of Rav Moshe Sternbuch and soon after, set up Avreichim Kollel in Sunderland.

In 1979 he was appointed Rosh Beit Din of Manchester where he served for five years, before being asked by then Chief Rabbi Lord Jakobovits to head the London Beit Din.

The Dayan was recognised for his huge Torah knowledge, insights and halachic wisdom and stood firm on his rulings and psak halacha.

He was unphased by criticism from the secular Jewish newspapers and focused on a clear objective of training teachers, mohelim, shochtim, rabbis, dayanim and many lay leaders within the community.

The Dayan was instrumental in improving the standard of kashrut and making it more accessible to British Jewry. He gave the go ahead for the first major Eruv in Britain with the full backing of the Gedolim in Erez Yisrael. But he didn’t just tell people what must be done, he personally got his shoes muddy and checked every aspect of the eruv.

Once when the Dayan performed a bris milah, he stopped by the house the next day to see how the young mother was getting on. She told the Dayan that she was scared to bath her son. The Dayan rolled up his sleeves and said with an warm smile, I will teach you how to bath the baby.

When a Rebbetzin from NW London in the nineties was severely ill, the Dayan carried a mobile phone with him, ONLY to receive her telephone calls.

His huge generosity was apparent when he paid for the clothes and kiddushim of struggling families on their barmitzvahs.

The Dayan visited almost every united synagogue on various Shabbatot over the years and his influence over thousands of observant, traditional and secular Jews was legendary.

In 1988 The Dayan became Rov of his own Beit Medrash and shul in Hendon with a purpose of turning it into a place of Torah. In addition to his duties at the London Beit Din, he headed the European Beit Din and travelled every few weeks across Europe to give gittim and other documents.

The Dayan built up many Torah learning institutions including in Edgware, Borehamwood and Berlin. His vigour, intellect, forward focus, attention to detail and meaning of time was well-known. The Dayan spent hours on preparing for a shiur, even though he had given the same lesson several times in the past.

His ability to encourage growth, articulate a point and motivate his audience was truly inspirational.

We are now orphaned without his presence and will always miss him, his words and his advice. I personally learnt so much from the Dayan and his infectious smile, words and deeds will always be with me.

His members and community were his children and their children were the einiklech of the Dayan and his Rebbetzin. This is really a devastating blow to British Jewry and Klal Yisrael.

There are many dayanim – all wonderful people who serve the community. However, there will only be one Dayan.

About the Author
James J. Marlow is a broadcast journalist and public relations media consultant. He has previously worked for ITN, EuroNews, Reuters, Daily Mail, Daily Express, LBC Radio, Sky News and GB News. In addition he has trained and prepared hundreds of business and entertainment people, politicians and Rabbis, for the media, including television, radio and audiences.
Related Topics
Related Posts
James J. Marlow