Anti-semitism is an ugly word, one which has been quite prominent in the news over the past few years. Statistics show a flare up of anti-Jewish or Israel sentiment giving the impression that society is reverting to twentieth century attitudes about prejudice and racism. I hope that is not the case. I know there are many reports of persecution and particularly in Europe today it is dangerous for some Jewish communities. I want to write about one unlikely city, which is telling quite a different story. 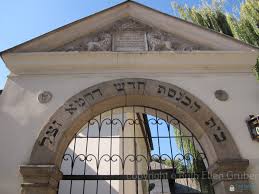 Specifically, I want to share the story of the hundreds of non-Jewish volunteers who have been helping the Jewish community of Krakow undergo a transformation over the past two decades. In the JCC of Krakow 50 non-Jews volunteer in the center, offering services, cleaning up after meals, manning the reception desk and supporting many activities. For what reason? What do they get in return? What motivates these teenagers and students in their twenties to sacrifice for the Jewish community? In a word — love. 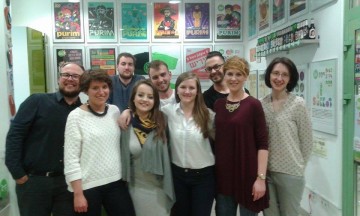 I am not saying they are in love with Jews, nor with the JCC; rather they love the idea it represents: a revival of Jewish life; a return to Jewish heritage once so common in the streets in Krakow; a return to the multi-cultural city of the early twentieth century which was prevalent in Poland for generations.

Agnieszka came to the JCC when she was 16 years old. Still in high school, she should have been worrying about boys, vacations, family

and school — Agnieszka had other things on her mind. She came to the JCC one day and stated her goal to be a volunteer, despite not being Jewish, despite being so young — five years later she has now become a full time member of the staff, though still finds the time to volunteer. What drives Agnieszka? She is not swept away in the romantic ‘other worldly’ notion of Jews or Israel; rather she rationally and intellectually sees beauty in the idea of a Jewish part of a city being resurrected. It is her Poland, which was the killing grounds of the Nazis, and her Krakow which saw ghettos, liquidations, death and suffering. She feels it should be her generation and her Krakowian friends who should help rebuild and restore Jewish life. 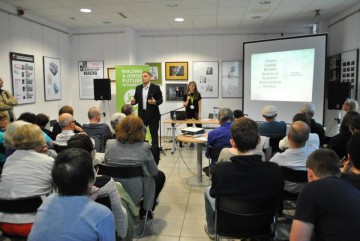 Agnieszka of course grew up 60 years after the horror but lives and works on the same streets which had Jewish names and passes by the same (now) empty Synagogues. She learned about World War II and the disaster wrought by the Germans and she also understood the inability of Jews who survived to live publicly as Jews during communist Poland. But the last twenty years has seen a younger, tolerant, more open-minded and culturally diverse Krakow population and one of their missions is to help restore a bit of the Jewish flavor to this city.

I asked Agnieszka what made her (and her fifty colleagues) different from the rest of the kids her age, that she devotes so much of her time to a Jewish cause. What made her unique? Her response surprised me: ‘I am not unique, I am not alone. There are thousands like me; thousands of young Poles who understand there was a Jewish world here and are interested in seeing Jews once again as part of the Polish landscape’.

This idea accounts for the curiosity about all things Jewish which has spread through Krakow’s intellectual and cultural life over the past few decades. Just a few examples: 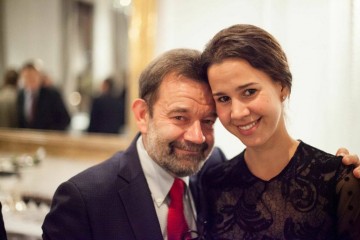 One of the most influential non-Jews in Krakow who dedicated his life to the Jewish cause over the last 25 years is a man named Janusz Makuch. As communism was crumbling in the late eighties and Poland was inching towards independence, Janusz was dismayed by the inability of Jews to express their Jewish identity, engage in Jewish culture, and do the unthinkable — openly speak about Jewish life. He strongly believed that a thousand years of Jewish history and Jewish contribution to Poland had to be brought back into the public discourse, and that he as a Polish born person was obliged to preserve, maintain, and educate about common Polish Jewish heritage and carry on this legacy. Thus was born the Jewish Culture Festival.

This past July, Krakow celebrated the 25th anniversary of Janusz’s wild idea. With over 250,000 Poles (almost all non-Jews) having visited the 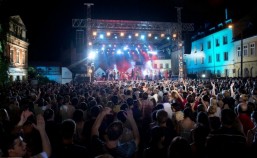 festival in the past 25 years we can surely say he succeeded in his endeavor. Today the festival is one of the largest of its kind in the world, and a large part of the facilitators are non-Jewish volunteers who make sure everything runs smoothly.

Aleksandra Makuch grew up with the Jewish Festival in her veins. Growing up watching her father’s life mission and vocation, she naturally participated in each festival. At first it was pure fun, but as she matured she understood that she was apart of something very meaningful and vital for her development as a person. 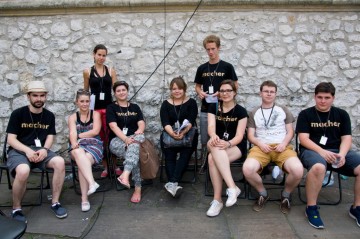 She feels very proud that she can contribute, even in a small scale to filing in the void created by the dark legacy of Holocaust and communism. She feels much richer having Jewish heritage as part of her Polish heritage.

I asked her whether she was alone and her answer echoed Agnieszka’s — there are many volunteers her age and an increase in interest each year. It is hard to estimate percentages, but what is more important than numbers is that this interest is less superficial, and deeper than a few years ago. Almost no one is against it.

Every day hundreds of people walk into the JCC in Krakow and are greeted first by a non-Jewish volunteer at reception. They are the ones to invite people in; they are the ones who tell the remarkable story of how Prince Charles became the benefactor of the Jewish Community Center of Krakow; and they are the ones to excitedly speak about the revival of Jewish life in Poland. What has possessed these young individuals to invest so much of their lives on the Jewish community? Aren’t they a little Meshuga? 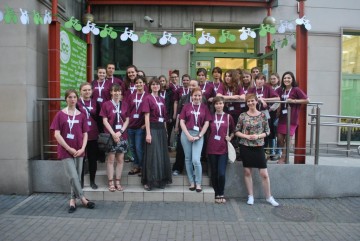 Actually, Agnieszka came up with a name for the JCC volunteers—MeshuGoyim! She says, people always think we are crazy and perhaps we are! We are crazy about the idea of a thriving Jewish population in Poland, something which had existed for close to a thousand years! We are crazy in our drive to help rebuild Jewish life and learn about the culture, heritage and religion. And we are committed to the beautiful Jewish idea of ‘chesed’ which is a universal message and a particularly important one for Poles who witnessed such darkness and now have the chance to be part of the light.

In a world which is seemingly darkened daily by anti-Semitism, it is comforting to know that Agnieszka and Aleksandra and hundreds of their friends are committed to changing the perception about Poland and its relationship to its Jewish population. Through their commitment, excitement and meshuga attitude, they have inspired me to look for the light in perceived darkness and to continue to work for a brighter future in Poland, in Europe and hopefully throughout the world.