After weeks in which fires from hell have swept over us in the guise of holy fire that burned mosques, a baby and his father; cut off in mid-song the young life of Shira Banki; and continue to rage in the form of numerous attempts to murder Jews, it seems only natural to despair. It might seem that this is our destiny, that the cycle of violence will only worsen. So it’s important to me to share with you a few of the things I have experienced during these weeks, things that show that there are growing numbers of key forces on both sides that are determined not only to condemn and abhor these heinous acts but also to take responsibility to build another, shared way.

Immediately after the burning of the Dawabsha family in Duma, leading rabbis from the Tzohar rabbinical organization approached me in my capacity as the head of Mosaica to ask that I arrange a meeting with senior sheikhs and Islamist leaders from Israel in order to express condolences, pray for a full recovery and voice a joint and strong message against all desecrators of God’s name.

The rabbis came with the Chief Rabbi of Jerusalem, Rabbi Aryeh Stern, and met with leaders from the Islamic Movement in Israel, headed by the movement’s founder, Sheikh Abdullah Nimer Darwish. Charged statements were made at the meeting, but there was a commitment from all sides to meet again — not to commiserate over blood already spilled, but to take joint action in order to prevent more bloodshed in the future.

I think Sheikh Raed Badir, the foremost religious authority of the Islamic movement and a senior member of the Palestinian Ulama Council, put it most succinctly after the heinous murder of the Fogel family in Itamar. He wrote, in accord with senior members of the Movement and Hamas figures, that although historical and moral justice mandate the establishment of a Palestinian state, it is better to wait a thousand years than to achieve a state this way. But just as he cannot accept, under any circumstances, the way of murder as a means of establishing a Palestinian state, so too the State of Israel cannot exist by way of burning children.

That same week, I was with Dr. Izzeldin Abuelaish at Achva College for a scholarship awarding ceremony by the Daughters for Life Foundation. As you may recall, Dr. Abuelaish was born and raised in a refugee camp in Gaza. He was working at Soroka Hospital in Beersheba when three of his daughters were killed by a stray shell during Operation Cast Lead. After their death, Dr. Abuelaish established the Daughters for Life Foundation, which provides scholarship awards to encourage young women from underprivileged families to pursue their dreams of becoming teachers. In this way, he contributes to the world of the younger generation that lives the life that his daughters were not privileged to live.

I personally have known this wonderful man for more than 25 years, both from Gaza and also from the time he lived in Netanya, while studying Hebrew at Ulpan Akiva with the legendary Shulamit Katznelson. At Achva College, he awarded scholarships to Jewish and Arab students, just as he has awarded scholarships in universities in Gaza, Judea and Samaria, Syria and Lebanon. This week, we will appear together in a series of lectures in North America. We will address how a person is able to turn a tragedy of unimaginable proportions into a dirver for hope and peace. We share a determination to find another way for both our peoples.

These are positive messages that need to be cultivated. Is not the message of noble, strong, peace-loving people much stronger and more meaningful than the messages that odious murderers are trying to convey with their heinous crimes? Does this not bring hope?

I see more and more people who recognize the reality that in this land, which is holy to us all, there are two peoples, so that the land does not “vomit us out,” as the Bible warns. We also need to revive the belief that we can live together — and not die — in this Land. 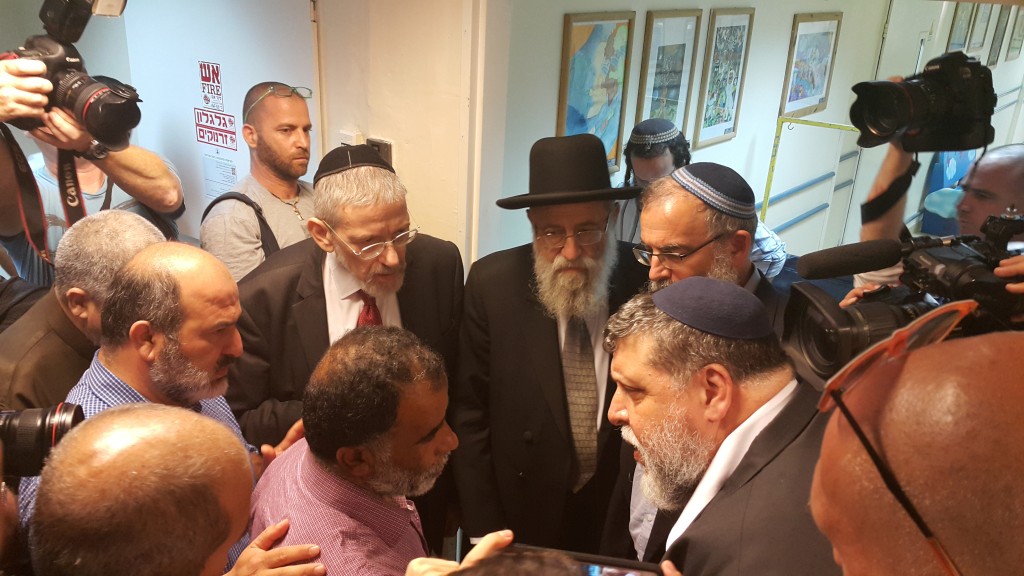 Jewish and Muslim religious leaders meeting with the grandfather of the burn victims at Sheba Medical Center, Tel Hashomer
About the Author
Rabbi Michael Melchior is a leading advocate for social justice in Israel, education for all, Jewish-Arab reconciliation and co-existence, protection of the environment, and Israel-Diaspora relations. Through his work, Rabbi Melchior seeks to strengthen Israeli civil society so it may catalyze significant social change in the State of Israel. He was a member of Knesset for the Meimad Party. Rabbi Melchior continues to hold the title of Chief Rabbi of Norway.
Comments