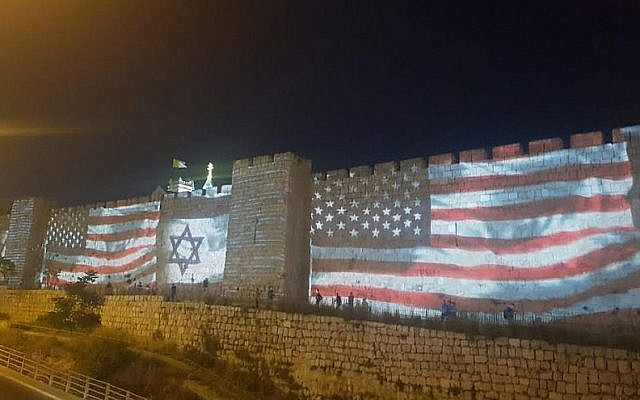 The city of Jerusalem Displayed American and Israeli flags on the Old City Walls on May 14, 2019. (Jerusalem Municipality)

On Thursday it was reported that President Trump ended his Rosh Hashanah phone call with American Jewish leaders by calling Israel, “Your country.” Many were concerned with the President’s characterization of Israel as the country of American Jews because the President ran on a campaign of “America First,” which seems to pit America vs. the entire world. If your country isn’t America, then you’re on the wrong team. This also isn’t the first time the President has made this remark.

Some believe that the President’s comment feeds into the classic antisemitic dual-loyalty trope that American Jews are more loyal to Israel than America. The President is not an antisemite. In this case, context is important. The President was selling himself as a candidate for reelection and listing the reasons that American Jews should vote to reelect him. Most of his points addressed Israel, and to summarize his points he brought them all together by referring to Israel as “your country,” much the same way another President or politician calls Israel “our issue.”

There’s a larger point to address than issues of dual loyalty and antisemitism, larger than President Trump’s remarks. Is Israel the home of American Jews? Every American Jew must define home and country for themselves. It is important to note that most American Synagogues that display an American flag, display an Israeli flag as well. The Israeli flag isn’t an ancient Jewish flag, Judaism has no flag, it is an Israeli flag, and Synagogues display it to show an affinity to the land and state of Israel.

Eretz Yisrael is the home of the Jewish people – and each and every Jew. We don’t yearn to be in Washington, New York or Los Angeles next year, and we don’t pray three times a day to return to Berlin, Baghdad or Morocco. A core value of Judaism is that Eretz Yisrael is our home, our Sages told us, “A Jew should always live in the land of Israel.” The Jewish communities decimated most by antisemitism are the ones who abandoned this value and tried to make someone else’s home their own.

American Jews are Americans just as much as any other American. The Judeo-Christian values that the founding fathers were guided by make America a natural place for Jews to thrive. All American Jews should feel grateful for the home and refuge that America has offered to our people. As a grandchild of Holocaust survivors who found a welcoming home in America, I will always have tremendous gratitude to America and a loyalty to its ideals. But American Jews must always remember, America isn’t our home. The homeland of the Jewish people is Eretz Yisrael. We shouldn’t need a President of the United States to remind us.