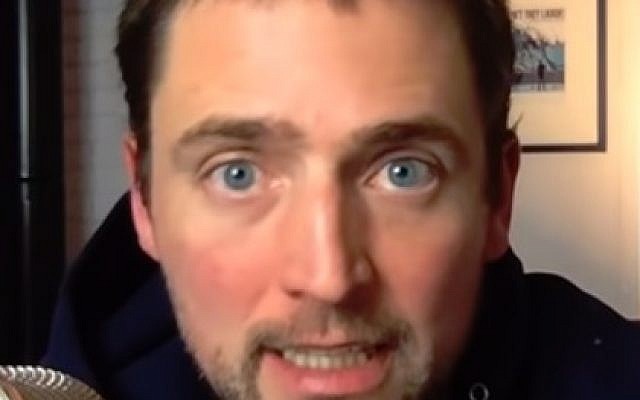 There’s a new Jew-hater in town. His name is Owen Benjamin.

The article about him on Wikipedia states that he is a comedian who practices “observational comedy.” He had two appearances on Jay Leno, appeared on a show produced by Comedy Central, and was briefly engaged to Christina Ricci.

At some point over the past few months, Benjamin, (who, as of this writing, has two videos on display at Praeger U), has gone off the deep end, broadcasting vile hostility toward Jews in his public appearances and on his social media accounts. He has accused the Jews of killing Jesus, promoted antisemitic conspiracy theories and has made ugly attacks on prominent Jews such as Ben Shapiro.

He has also posted ugly images on Instagram that demonize Jews in some very ugly ways. For example, he has posted an image of Ben Shapiro over the words “Jewassic Park” written in the same font design as the movie logo for “Jurassic Park.” He has also taken passages from the Talmud out of context to show that Jews are a malign and perverted people.

In one YouTube video, Benjamin improvises antisemitic lyrics to the tune of “Hurt” by Nine Inch Nails. “ (His Youtube channel has almost 250,000 subscribers.)

Benjamin’s Jew-hatred has come to the attention of Aussie Dave at IsraellyCool who has justifiably declared that “the ‘comedian’ has well and truly shown he is a rabid Jew hater.” Aussie Dave has also documented how Benjamin has mocked Holocaust victims.

Benjamin’s antisemitism has also attracted the opprobrium of Dr. Michael Brown. Brown has declared reasonably enough on his YouTube channel that Benjamin’s lies about the Jewish people can incite people to violence.

In a YouTube video, Brown declares that “Owen Benjamin has become completely unhinged” and that people who have worked with him in the past may be “trying to reach out to him” because they are worried about his mental or emotional state. (Let’s hope they are.)

Brown also asks that Benjamin’s former colleagues “publicly separate themselves” from his comments and “denounce what he’s saying in the clearest possible terms because this stuff gets very dangerous.”

This seems like a reasonable request, in light of some of the antisemitic comments under Brown’s YouTube video, which are along the same vein as Benjamin’s rants. The fact is, Benjamin has gone off the rails and is encouraging others to express their contemptible hatred of the Jewish people. Nothing good can come from this turn of events.

Complaints to Instagram about his hateful postings have been responded to with the laughable statement that his account or postings “do not violate [Instagram’s] community guidelines.”

This is simply laughable. Benjamin’s friends and family (who must be appalled at his behavior) need to get him the help he needs. And the Internet companies that are turning a blind eye to his incitement need to enforce their guidelines in an honest and legitimate manner.