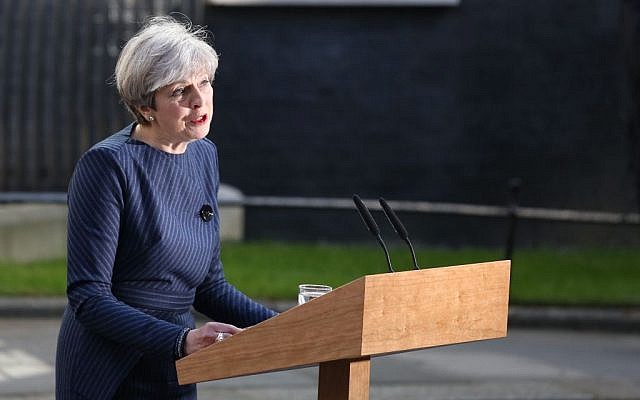 Within hours of Mrs May announcing she would resign the office of Prime Minister tomorrow, a succession of communal machers vied with each other in their search for words of praise for one of the worst prime ministers in British history.

United Synagogue Chief Rabbi Ephraim Mirvis declared: “The Jewish community will look back on the premiership of Theresa May with deep gratitude for her friendship – in particular, her commitment to challenging antisemitism wherever it is found, Holocaust memorial and the physical protection of our community.”

Board of Deputies president Marie van der Zyl prophesied that British Jewry “will always appreciate her friendship and support”, and Jewish Leadership Council chair Jonathan Goldstein proclaimed that, given May’s “action against antisemitism as Home Secretary  … her government’s protection of faith schools, the proscription of Hezbollah and the strengthening of ties with Israel,” she had been “a true friend”. Had she? Let’s examine the record.

Only last month, her government pushed through Parliament new regulations on Relationships & Sex Education in all English schools (including privately-funded faith schools) that are angrily contested by our Charedi brethren as well as by broader coalitions of Christian, Muslim and Jewish parents and educators.

The planned £100 million Holocaust Memorial (most of which cost will come from the hard-pressed taxpayer) in Victoria Tower Gardens, Westminster is the subject of bitter public controversy.  Mirvis, Goldstein and van der Zyl may support it. Many British Jews do not.

And so we come to Israel.

On 23 December 2016 the UN Security Council approved by 14 votes to zero a resolution (2334) declaring all Israeli [that means Jewish] settlements in the West Bank and east Jerusalem to be “occupied” Palestinian territory – including the Jewish Quarter of Jerusalem’s Old City and the Western Wall.

All these settlements (says 2334) are illegal and must be vacated as part of any final peace agreement. So there can be no peace talks based on “land for peace” because according to 2334 the land in question is already Palestinian and not Israel’s to bargain with. But 2334 does not oblige the Palestinians to recognise Israel as
a Jewish state.

In the past, such spiteful resolutions were vetoed by the USA, one of the Council’s five permanent members. But in a parting shot signalling his dislike of Bibi Netanyahu, US President Barack Obama declined to use its veto.

The UK is also a permanent Security Council member, so May could also have vetoed the resolution. She chose not to. She could at least have ordered the British representative to abstain. She did not. And given that China and Russia also have the power of veto, 2334 is virtually immune from repeal. Is that what being “a true friend of Israel” amounts to?

I accept that both as home secretary and as PM, Theresa May earmarked substantial sums of public money for Jewish communal defence, and that under her premiership, the Hezbollah terrorist group has been fully proscribed. But aren’t we entitled to these necessary measures
of protection as of right?

In her tearful resignation speech, May had the effrontery to quote Sir Nicholas Winton, the stockbroker who saved hundreds of Jewish children from the Nazis in Czechoslovakia . The fact is that of the 3,000 places theoretically available under the 2016 Vulnerable Children’s Resettlement Scheme, May capped the number at 480. Her failure to honour the spirit of the scheme amounted to a brutal repudiation of Winton’s humanitarian outlook and an obstinate denial of the legacy of this great British Jew.