The Blogs
Michal Cotler-Wunsh
Apply for a Blog
Advertisement
Please note that the posts on The Blogs are contributed by third parties. The opinions, facts and any media content in them are presented solely by the authors, and neither The Times of Israel nor its partners assume any responsibility for them. Please contact us in case of abuse. In case of abuse,
Report this post. 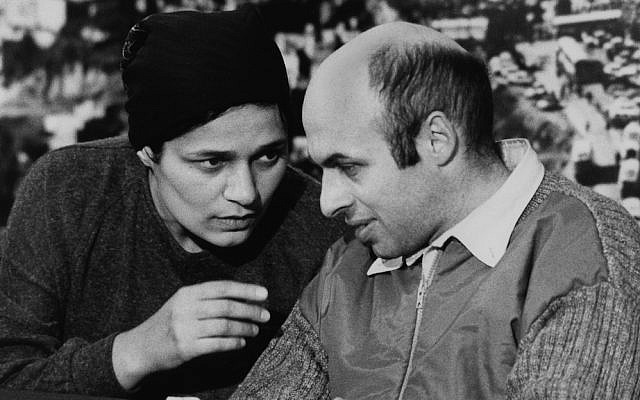 Former Soviet refusenik and prisoner, Israeli politician, human rights activist and author Natan Sharansky with his wife Avital after his release from prison in the Soviet Union in February 1986. (Moshe Shai/Flash90)

I didn’t realize it at the time, but I was witnessing history in the making as I sat on the sofa in the middle of an austere, modestly decorated living room in Sderot.

The room was filled with women of modest backgrounds — teachers, factory workers, caregivers — who were there to share and engage with Aliza Begin, the wife of then-Prime Minister Menachem Begin, on what had to be done in order to narrow the ignored gaps between ‘haves’ and ‘have nots’ in Israel.

Despite her status, Aliza Begin never seemed out of place in these settings. She came as an equal, always willing to listen. And for what was likely the first time in their lives, these women felt seen and heard.

As a 7-year-old child, I attended these living room sessions because my mother, Ariela Cotler, was the parliamentary secretary for Menachem Begin. Since I was a child, I was more prone to falling asleep on the couch and soaking in lessons for life unknowingly, than listening intently to the challenges and opportunities of a generation.

Aliza Begin’s bottom-up, grassroots approach to enabling long-term change resonates and has influenced me profoundly. She understood that the process of effecting change must go through the women in society, acknowledging and empowering them. When she founded Project Renewal to rehabilitate underprivileged neighborhoods, she put into motion the infrastructure for social mobility for families of lesser economic means from across Israel, beginning the long process of leveling the playing field.

In addition to visiting their homes, she invited them to hers. She hosted these mothers for tea in the prime minister’s residence and honed in on their aspiration of catapulting their children to a better future.

While the direct correlation of her being an olah – an immigrant to Israel – is unclear, it undoubtedly shaped her mindset. Begin knew full well what it’s like to leave everything behind in order to realize the vision and dream of building a future for the Jewish people in a sovereign ancestral homeland.

My mother, with me in tow, took the reverse journey, expanding the understanding and impact of a strong woman intimately familiar with the new immigrant experience.

As the daughter of new immigrants from Iraq, she bravely overcame the challenges of growing up in Jerusalem with very little means. One of seven children, she understood what it meant to be born in this country of olim, for olim, to olim, navigating the gap between dream and reality; between the country that was being built and the parents who left everything behind.

As the parliamentary secretary for Menachem Begin leading up to and during the night of the mahapach (overturn) in 1977, she, like Begin, embodied the commitment to Jewish unity above all, based on the importance of acknowledging that the deep connection between Jews of all backgrounds transcends and outweighs real or perceived differences. When she moved to Canada to accompany my father, a human rights warrior who himself served as a life-long bridge-builder, she experienced the reverse new immigrant challenges herself.

A third woman role model and inspiration I was privileged to witness in action was Avital Sharansky. Like the women mentioned above, she was the epitome of unwavering commitment, grace under pressure, dignity, humility, and wisdom.

Avital undertook the mission of advocating for her husband Anatoly (Natan) Sharansky’s release from prison and, seemingly overnight, became the de facto voice of the Soviet Jewry refusenik movement. She unabashedly stood up for what she believed and spoke up to world leaders, community volunteers, and housewives to fight for his freedom. She participated, inspired and held rallies worldwide and never once wavered in her uncompromising commitment to human rights and justice.

Avital sought no recognition, other than seeing her husband, and the symbol he had become, run in zig-zags across the bridge to freedom. She dedicated her life to not only her personal mission but to ignite our sense of collective responsibility and mutual guarantee as a people. Jewish women’s movements in North America were emotionally invested in Avital’s cause, which became their own, and lobbied their elected officials to secure Natan’s release. Like Aliza Begin, Avital saw how women can fling open the gates of change, recognizing that ‘there’s a crack in everything, and that’s how the light gets in.’

These women understood the ripple effect that is possible when engaging at eye-level with others, imbuing and empowering them with their sense of mission and purpose. Viewpoint diversity and conduct are a benefit to all. Women have different ways of creating systemic and societal change. It is precisely that vision that anchors and guides me, including as current head of the newly launched Nefesh B’Nefesh’s Institute for Aliyah Policy and Strategy.

The goals of the Institute are not only to see, facilitate and assist individuals, but to recognize and empower the collective. In doing so, we aim to create systemic, holistic change in proactive ways. Each woman’s story of empowerment is a paradigm that we seek to scale, thereby improving the collective olah experience, absorption and impact, affecting Israel and the Jewish people as a whole.

Making Aliyah from Poland and Ukraine, respectively, Begin and Sharansky were olot in the traditional sense, while my mother was a reverse immigrant and part of a sandwich generation, between one that saw Israel as an unbelievable miracle and one that had, and still has, the responsibility to build that miracle. Each of these women represents immigrants as the global, live bridge, connecting Jews in Israel to their brothers and sisters around the world.

All three women were married to figurative giants in their field, identifying and realizing the magnitude of their husbands to deepen and catapult their own sense of duty and purpose. As we mark International Women’s Day in 2022, more than ever it is imperative to avoid getting caught up in ’identity politics’ and the theoretical discussion of whether or not a woman identities as a feminist or not, we must think of ourselves not only in terms of what our rights are within society, but ‘lean in’ to the responsibility that comes with them, committed to advancing and creating a more equitable society, for the benefit of all.

These and so many others never once asked permission to be who they are. Instead, they knew they had the capability, resources, and responsibility to make the world a more free and fair place, one person at a time. I remain eternally grateful for what they modeled and am committed to following their lead. I hope you will too!