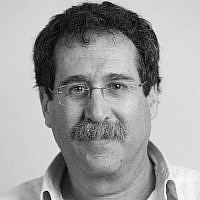 The Blogs
Dan Ben-David
Apply for a Blog
Please note that the posts on The Blogs are contributed by third parties. The opinions, facts and any media content in them are presented solely by the authors, and neither The Times of Israel nor its partners assume any responsibility for them. Please contact us in case of abuse. In case of abuse,
Report this post. 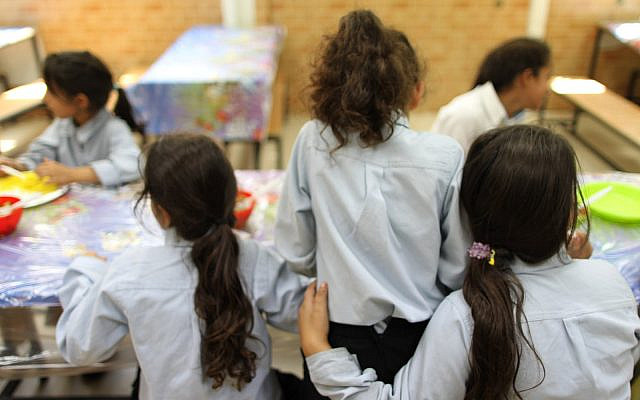 In Jerusalem, young girls eat at the Yad Ezra V'Shulamit center, an organization that serves hot lunches to 1200+ children under the poverty line and distributes over 10 000 food packages to families before Rosh ha Shana. September 27, 2011. (Nati Shohat/FLASH90)

There is an abundance of the socioeconomic issues requiring Israel’s attention, but there are three specific challenges that literally endanger the country’s future if not fully addressed soon.

Covid-19 raised to the surface a host of problems that Israel has swept under the rug for years. The good news – if one could even refer to them in this way – is that the pandemic provided an early warning of a future that will endanger Israel’s very existence. The upcoming elections provide us with one of our last viable opportunities for a major pivot in Israel’s national priorities before the current future trajectory becomes irreversible.

Daily torrents of data pouring from storms of spins and alternative facts diminish the ability to distinguish between wheat and chaff. In the actual world, the one behind the veil of partial and misleading information, Israel has been steadily falling further and further behind (in relative terms) the developed world’s leaders since the 1970s.

The gap in GDP per hour worked (which determines whether a high hourly wage can be given) between the average of the G7 countries (USA, Canada, England, France, Germany, Italy and Japan) and Israel has more than tripled over the past four and a half decades. 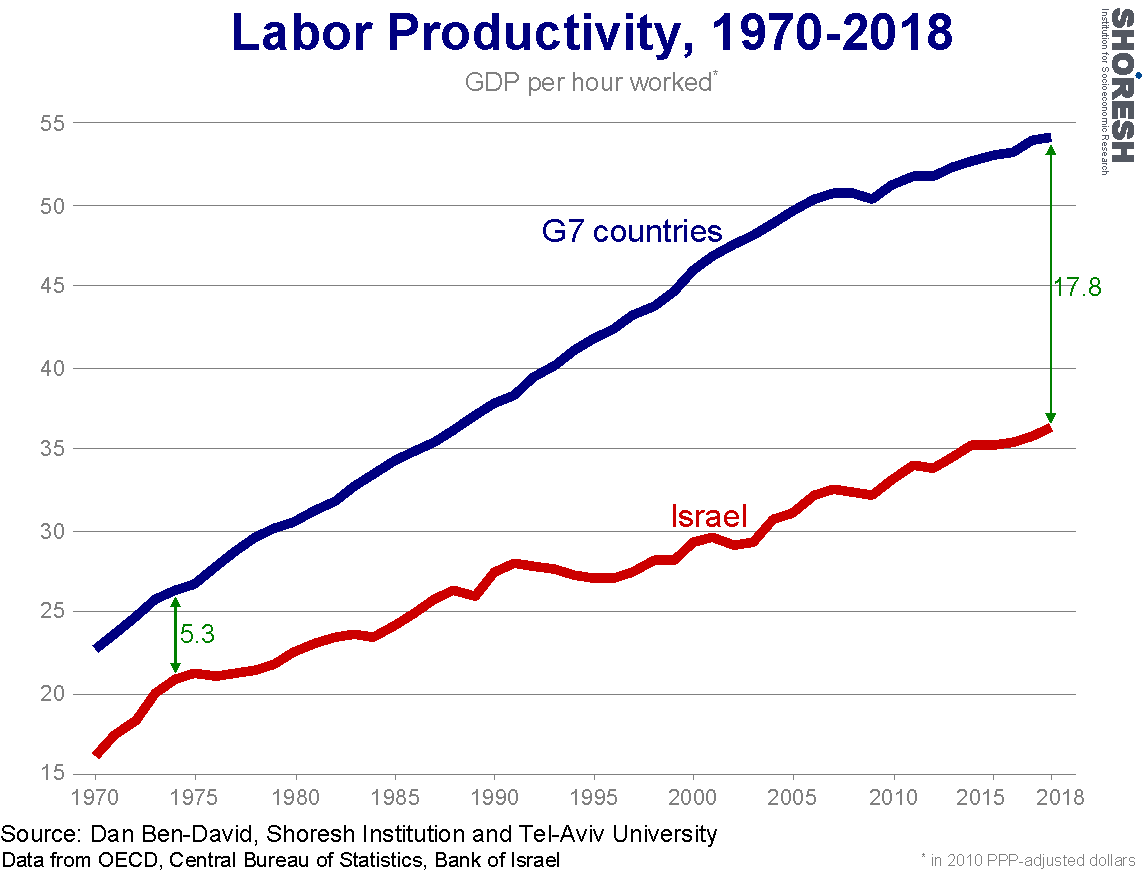 There are many reasons why Israel has been falling behind. But with the upcoming elections around the corner, it is important to focus the public discourse on Israel’s three primary socioeconomic problems. If we fail to deal with them thoroughly and decisively while we still can, there will be no future Israel for our grandchildren. Period.

First of all, the educational system’s complete dysfunction during the coronavirus year just highlights its perennial dysfunction, which has been methodically destroying Israel’s future for decades. 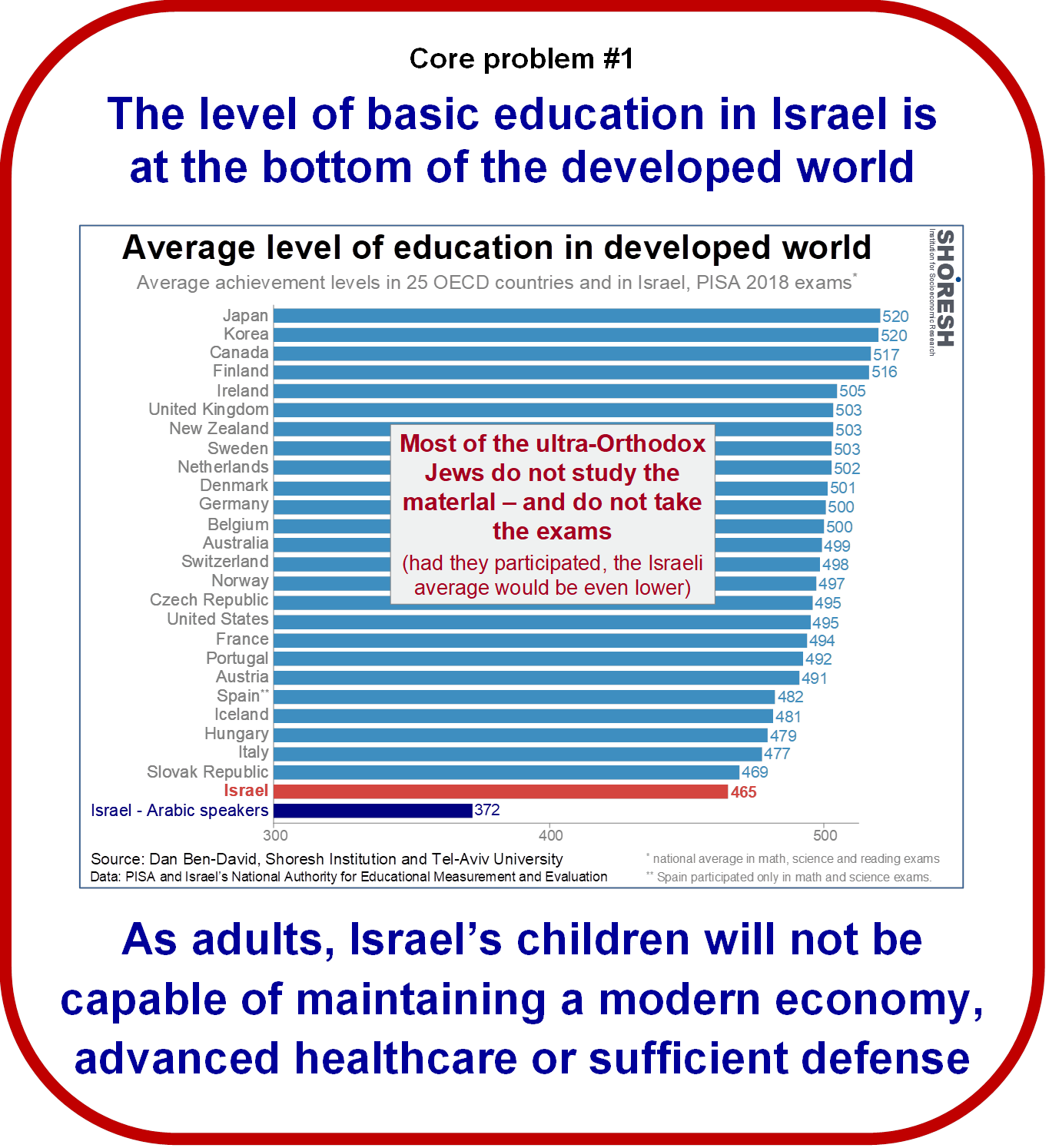 Second, a small – for the time being – haredi (ultra-Orthodox) leadership is doing anything and everything to maintain power. It is (1) enabled by the government to completely control the flow and content of all information reaching its people from birth, and (2) advocating policies that literally endangered the lives of its own community (not to mention the rest of the country) during the deadliest pandemic in a century. One can only imagine Israel’s future when taking into account the exponential speed of the country’s demographic changes. 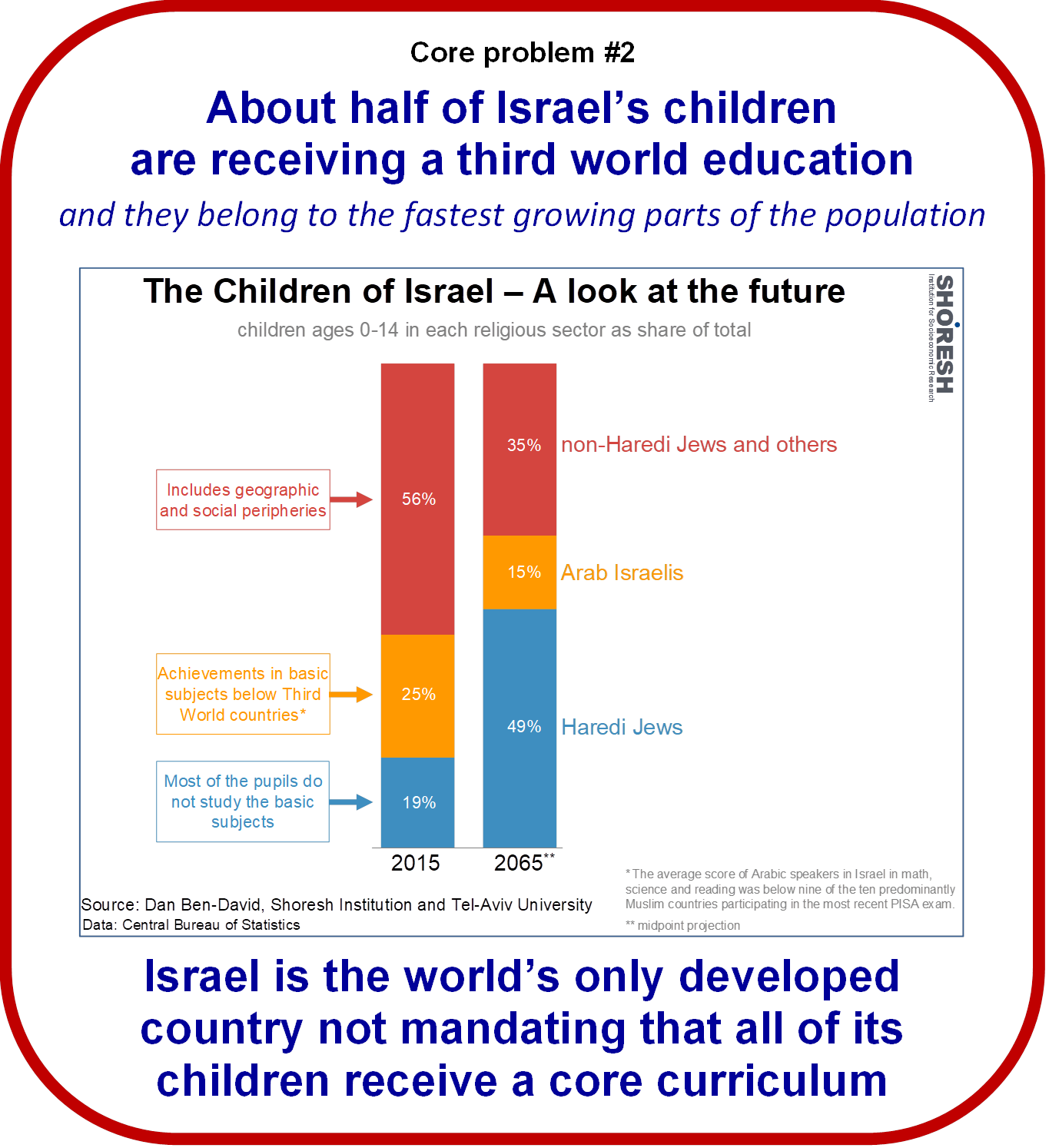 Last, selective law enforcement has exacerbated far more than the corona crisis. For years, this conduct has been distorting the tax burden and creating huge losses in tax revenues. As if this were not enough, the lack of budget transparency has enabled sectoral and personal considerations to override national ones in determining the government’s distribution of our tax money. 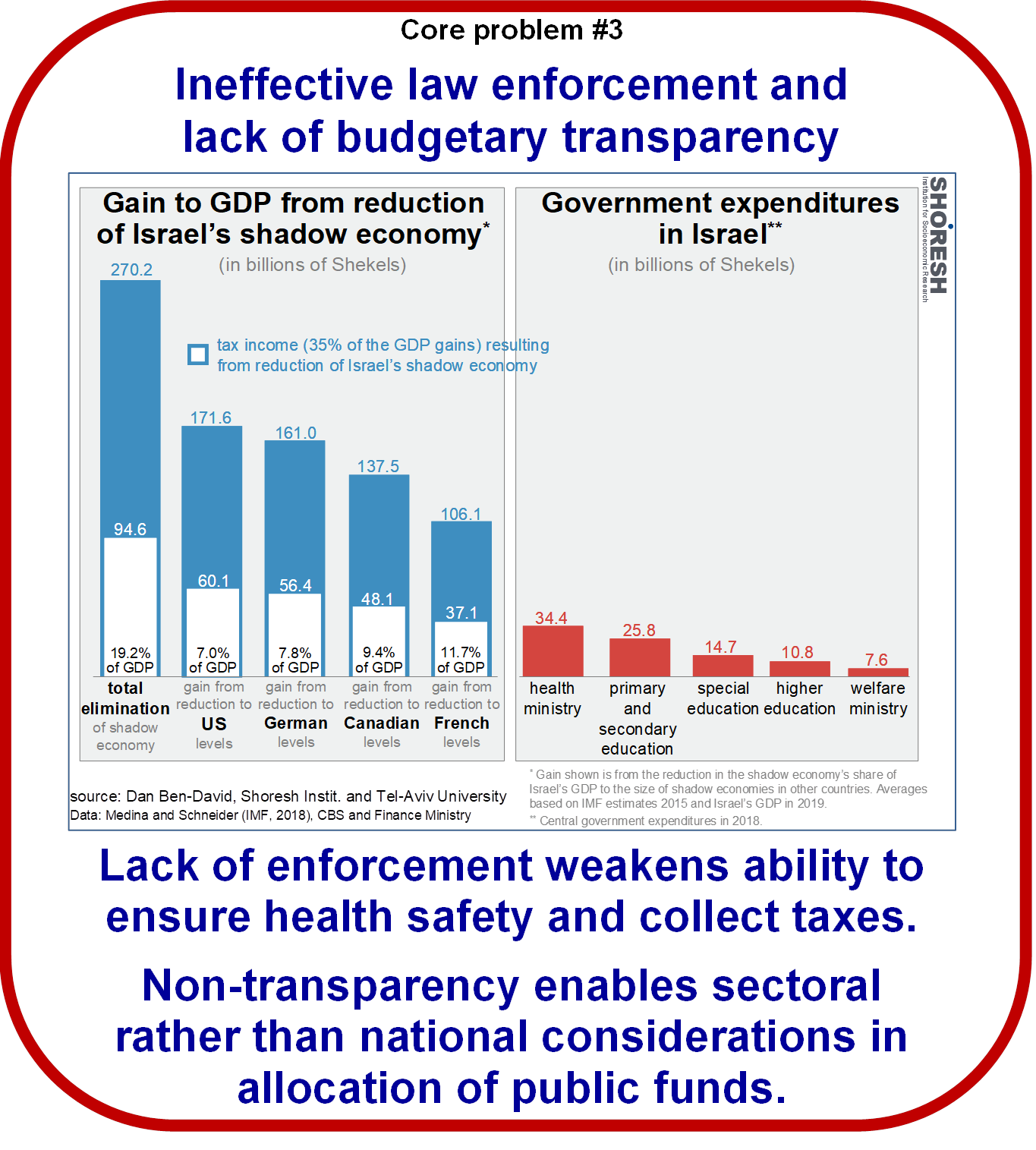 Choices determining Israel’s future will be made soon, whether by conscious decisions or by the current default. The three most crucial challenges requiring immediate and systemic solutions highlighted above are not yet a factor in the upcoming elections (the Shoresh Institution website provides a considerably wider perspective of Israel’s core socio-economic challenges). That needs to change.

A country desiring continued existence needs to know when to set aside the Left-Right, religious-secular, Jewish-Arab agendas because we are all on the same ship. The time has long since passed for us to stop quibbling over the arrangement of deck chairs on the Titanic.

There is a huge iceberg in front of us all. If we do not come to our senses and change course while we still can – before eclipsing Israel’s demographic-democratic point of no return, after which laws that are already difficult to pass in the Knesset will become impossible to legislate – that iceberg will spell the end of Israel.

The graph below partitions the world into three main income groups: rich, medium income and poor countries. Fertility rates in the wealthy countries are low – and in some cases, even too low for maintaining adequate social security and welfare systems. In the middle-income group there are countries with relatively high fertility rates. The group of poor countries is huge – roughly four times the size of each of the other two groups – and their fertility rates are high. 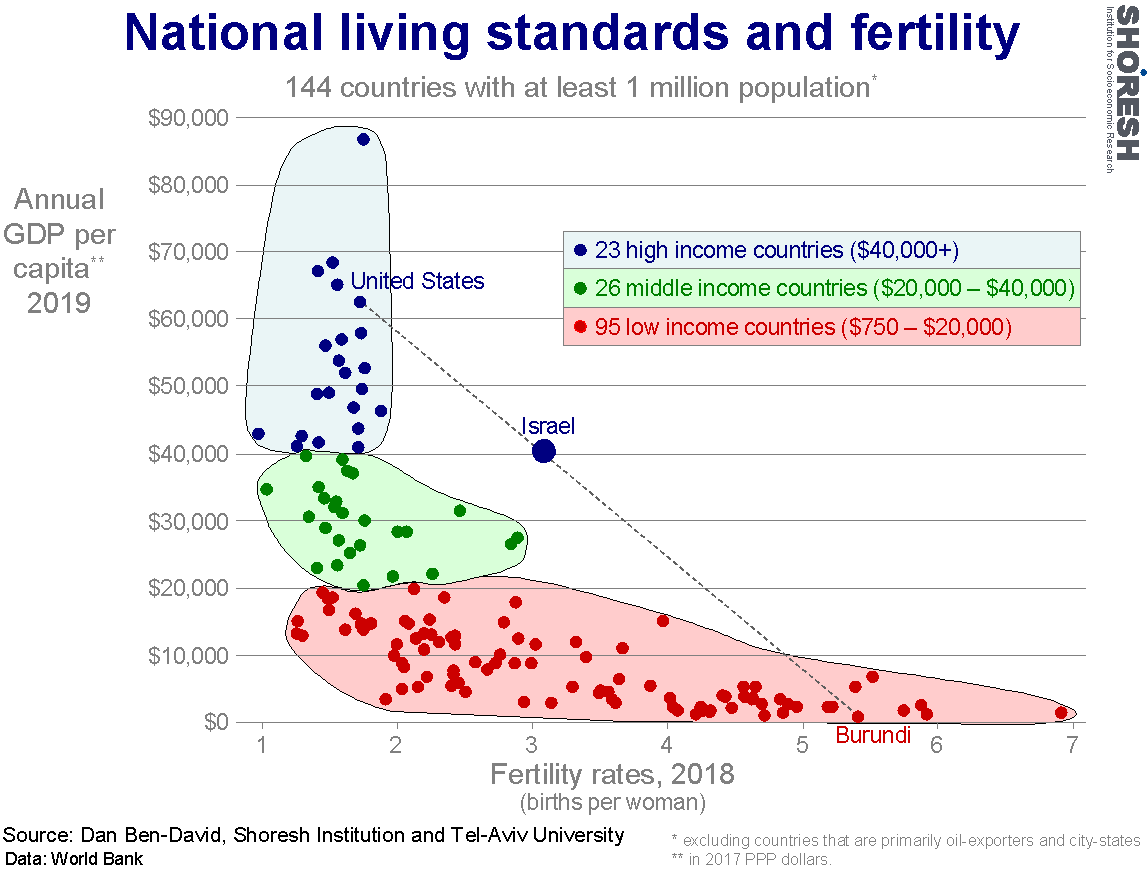 Israel is not a member of any group – that is, Israel is not at a steady-state long-term equilibrium. In a sense, we’re the developed world’s “plus one,” with a per capita income that places Israel at the bottom of the first world economically, with third world fertility rates.

In fact, if you draw a straight line from the United States through Israel, you reach Burundi, the poorest country in the graph. Israel is a sort of weighted average of the two countries, with one foot in the first world and the other foot planted firmly in the third world. Alongside the start-up nation, with its world-class universities and amazing cutting-edge high-tech sector, there is another nation within Israel – a population group that receives neither the tools nor the conditions to work in a competitive global economy and live in a modern society.

Already today, half of Israel’s population is so poor that it does not reach the lowest income tax threshold and does not pay any income tax at all. The top two income deciles alone, just 20% of the population – mainly Israel’s more educated and skilled persons, the ones with alternatives abroad – account for 92% of all Israel’s total income tax revenue, with the gross income per earner in the ninth decile averaging only NIS 18,800 per month ($68,300 annually). The burden on these shoulders has been rising steadily over the years (it stood at 82% of all income tax revenue twenty years ago). This is not a process that can continue unabated forever.

When merged together, the very poor education provided in Israel (core problem 1), the exponential pace of demographic change (core problem 2) and the inability/unwillingness to enforce laws and implement budget transparency (core problem 3), should leave no doubt as to which of the three groups in the last graph – first world, medium income or third world – Israel is currently headed toward.

So what should we do between now and Election Day?

Israel’s “everything will be okay” mindset is its Achilles heel. Nothing will be ok if we don’t get our act together, rebuild the broken systems from their core and see to it that we leave a future here for our children and grandchildren.

“If you will it, there’s a way!” These words of Theodor Herzl spurred our founding fathers to build a country here against all odds. They also signal that it’s within our power to save our country when everything may seem hopeless.

Prof. Dan Ben-David heads the Shoresh Institution for Socioeconomic Research and is an economist at Tel Aviv University’s Department of Public Policy.

About the Author
Prof. Dan Ben-David is an economist at Tel Aviv University’s Department of Public Policy and heads the Shoresh Institution for Socioeconomic Research.
Comments