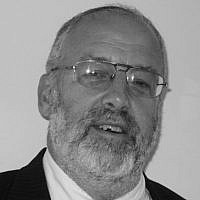 The Blogs
Michael D. Hirsch
Apply for a Blog
Advertisement
Please note that the posts on The Blogs are contributed by third parties. The opinions, facts and any media content in them are presented solely by the authors, and neither The Times of Israel nor its partners assume any responsibility for them. Please contact us in case of abuse. In case of abuse,
Report this post.

An Open Response to Rabbi Shalom Cohen of Shas:

Dear Rabbi Cohen, I along with thousands of others were taken aback by your despicable remarks directed at the National Religious movement. That you delivered these remarks during the Nine Days of Av, a period when as Jews we are supposed to repent from our evil ways (particularly idle hatred, a trait which the Talmud tells us directly led to the destruction of the Second Temple) is indefensible.

Allow me, then, to turn the tables and ask of you and the other leaders of Shas the following questions:

* We are taught in Ethics of the Fathers (1:10): “Despise authority.” In direct contravention of which we have a religious political party such as Shas. How can one rationalize sitting in the Knesset if one is counseled to despise authority? So, I ask you–These people of Shas are Jews?

* That text also warns us (4:7): “Do not make your Torah into a spade.” Which Rabbinic authorities have interpreted to mean one should not seek financial gain from his religious observance. So, when Shas offers to vote with the ruling coalition if one of its leaders’ sons-in-law is appointed Chief Rabbi of Malha Mall, is that not in direct contravention of this precept? I ask you again, Rabbi Cohen–These people of Shas are Jews?

* In assembling the army which would do battle with Midian, Rashi tells us (Numbers 31:4) that even the Levites, the spiritual leaders of the nation, had to supply men. Why, then, in our times, with Hamas to our south, Hezbollah to our north, and Syria/Iran to our east are thousands upon thousands of Shas young men (aged 20-30) sitting in yeshivot instead of serving in the IDF? Would you have us believe they are on a higher spiritual plane than the Levites who served in the Holy Tabernacle? Once more–These people of Shas are Jews?

* As regards those same 20-30-year olds, assuming you can jerry-rig a rationale for their not serving in the IDF, explain to me why they are not employed, why they are not self-supporting, why they must subsist off the public dole? Are we not also taught in Ethics of the Fathers (3:21):’ If there is no worldly occupation, there is no Torah”? Again–“These people of Shas are Jews?

* You also disparaged the National Religious camp for wearing knitted yarmulkes. To the best of my knowledege, Rabbi Cohen, our forefathers Abraham, Isaac, and Jacob, as well as Moses, Aaron, Joshua, etc., etc. all wore knitted yarmulkes, not those constructed of black velvet (which you would have us believe somehow makes one a  “better” Jew). I will ask you one final time–These people of Shas are Jews?

There is an old axiom, Rabbi Cohen–people who live in glass houses should not cast stones. I hope in the future you and the other members of the Shas Council of Torah Sages will (a) bone up on your Torah learning before casting aspersions at others’ religiosity, and (b) remember it is G-D who judges each of us, not Shas.