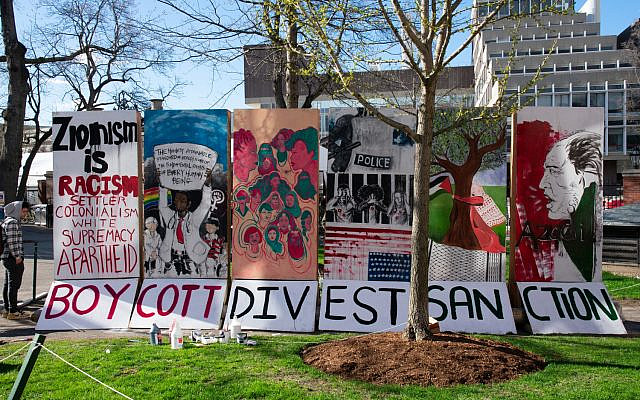 The "Apartheid Wall" Erected at Harvard University over the Passover Holiday, via the Harvard Crimson

Students at Harvard University erected an “Apartheid Wall” on the first night of Passover this year. The display stood for the duration of the holiday, adorned and accompanied by incitement against Jewish students. During this year’s Festival of Freedom, Harvard’s Jewish students were burdened by a palpable air of threat.

The perpetrators of this provocation and their allies were quick to mount a rhetorical defense. Culminating in a full-blown blood-libel courtesy of The Harvard Crimson’s editorial board, those who openly and proudly seek the destruction of the single Jewish state repeatedly fell back on that common line: “We are just against Israel.”

Anyone naive enough to hold a conversation with one of these people has heard this line. They don’t want to talk about how the destruction of the Jewish state will harm Jews and they don’t want to talk about how opposing the existence of a Jewish state and life in Eretz Yisrael is active opposition to a core pillar of Judaism. They want to further their libels and programs without the realities of Jews and Judaism getting in the way, so they say, “we are just against Israel.”

The mistake many Hasbarists make is to believe that these people are lying. No, say the Hasbarists, these people aren’t just against Israel! They are against Jews, and they are just using Israel as a tool to attack Jews!

Israel is not, at its core, a government or a state. Fundamentally, Israel is a people, Am Yisrael, it is a land, Eretz Yisrael, and it is a substance, a culture, a heritage, a spiritual avenue, a legal structure, Torat Yisrael. From these three characteristics, Am, Eretz, and Torah, Israel is indivisibly whole, a body both substantive and physical, ordained to establish bodies to ensure its security and pursue its aspirations, like governments and militaries. Israel the state is not separate from Israel the people, the land, or the substance, but their organ, their vehicle, even if it has not yet been fully realized as such.

The enemies of Israel are diverse; Islamist imperialists, pan-Arab expansionists, Western neo-imperialists, racial supremacists, Christain supersessionists, crusading liberals, internationalist Marxists, et al. They have no positive goal between themselves only an oppositional alignment; they are just against Israel.

When these people say they are “just against Israel,” they are not using the State of Israel as a red herring, they are rightly attacking it as a product and vehicle of something they really and truly hate. Hasbarsists who instead try to construct yarn-and-paper conspiracy charts to like these people to slightly more transparent antisemites only delegitimatize Israel as a Jewish state. They implicitly reject the State of Israel’s purpose as the political body of the People, Land, and Torah of Israel and their role as the basis of the state, only further playing into the hands of Israel’s enemies.

If we want to be a strong, secure nation, whether that be in the streets of Jerusalem or the quads of college campus’, we need to be strong in ourselves. When those who seek as harm, killed, dispersed, oppressed, say openly, “I am just against Israel,” do not give them credit that they just mean this aspect or that aspect of Israel. They are just against Israel, not just her political body, but the People of Israel, the Land of Israel, and the Torah of Israel.