The Blogs
Sharon Klaff
Apply for a Blog
Please note that the posts on The Blogs are contributed by third parties. The opinions, facts and any media content in them are presented solely by the authors, and neither The Times of Israel nor its partners assume any responsibility for them. Please contact us in case of abuse. In case of abuse,
Report this post. 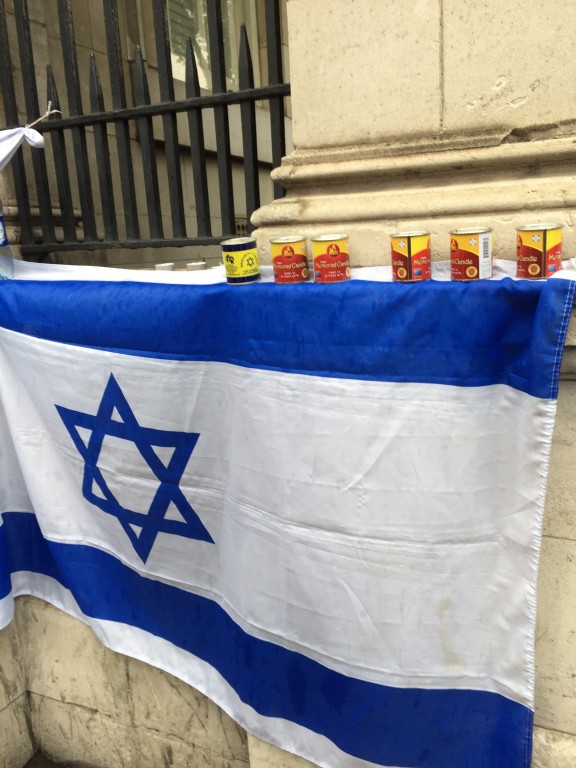 They came armed on Saturday onto Kensington High Street, London, to protest outside the Israeli Embassy following Israel erecting metal detectors at the Temple Mount, Jerusalem. We faced off three hundred of them, all 8 of us with our flags and our candles, planning a silent vigil to mourn the three members of the Salomon family slaughtered by an Arab intruder at their Shabbat dinner table Friday night.

We stood there proudly with Israel as their numbers grew, only two police officers allocated to attend this demonstration, one male and one female. It soon became evident that these lone officers would not be able to contain the palpable violence emanating from the Palestine In Britain hoards across the road.

Eyeing our flag, they began to close in on us, crossing the road in increasing numbers as the two shell-shocked police called for back-up. As police cars arrived the traffic came to a standstill, an ambulance attending someone behind their barrier, we held our flags on high, using our megaphone to convey our message about the encroaching Palestinianism, the revisionism of our Judeo-Christian ethic:

Suddenly, as Ambrosine and I held each end of her magnificent mega blue & white flag, it was yanked from our grasp, causing us to stumble and spin as the sniper shot down the road, the flag scrunched under his arm, his cohorts running after him. We now know, thanks to RUPTLY, that they threw it to the ground, jumped up & down on it, ripped it and used their flammable canister to set it alight to chants of Allahu Akhbar, the well-known terrorist combo of fire ‘n chant.

Yes, “used their flammable canister”, as though one usually goes to a demonstration with such a canister tucked into one’s rucksack – in case you need to make a fire, to burn a flag? A little like Mohammed Khaled Omar Ali found carrying a rucksack full of knives at Westminster in April, not long after a policeman was killed outside Parliament in the name of a perversion of Islam.

Sadly, the damaged flag was returned to us serving as an eternal reminder of the attempts over millennia to eradicate us as Jews. 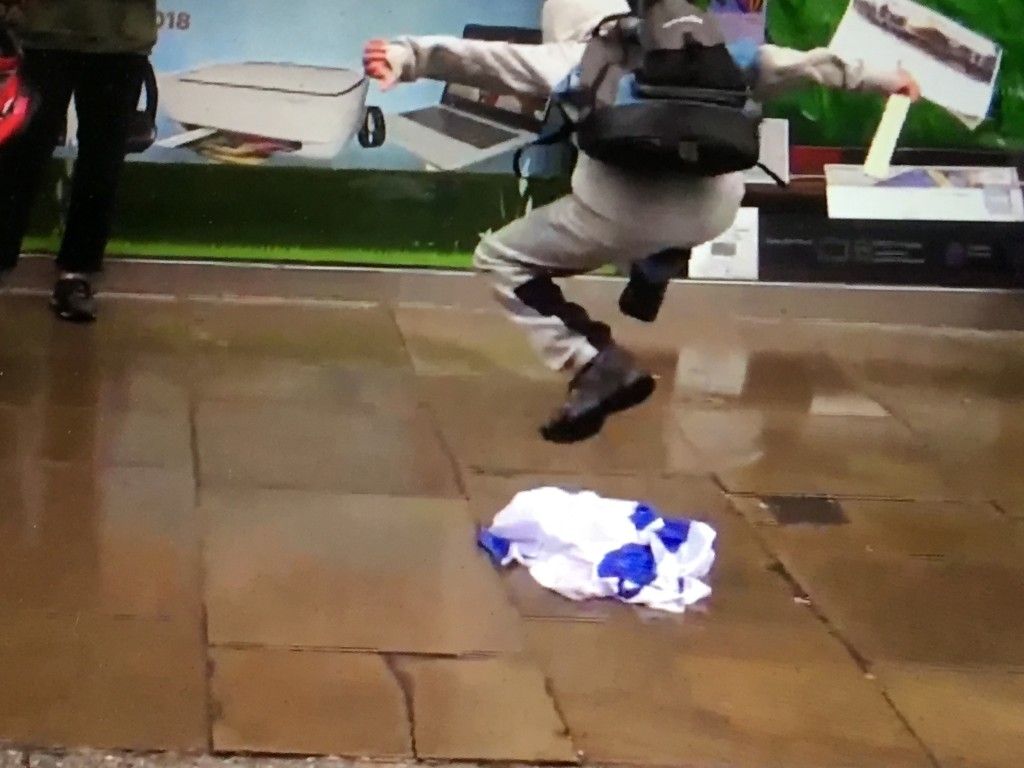 Watching the film footage, it is now evident that many of those hoards, children as young as 4 amongst them, had come along with the intention to commit a felony.  By the time this violation of our flag took place, police back-up had arrived, but there were no arrests, not for theft, not for assault, not for making a fire on a public street, not for desecrating the flag of a UK ally and not for arriving at a demonstration armed for dangerous activity. 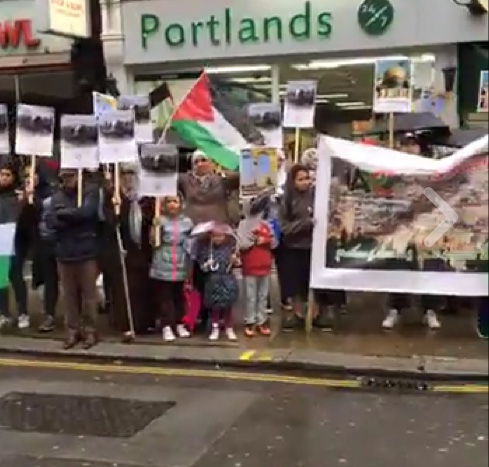 All the while the children, small ones and big ones, some on their father’s shoulders, raising their baby fists in the air, others bored, a few clearly not wanting to be there, frightened by the anger of the adults around them, hijabed mothers encouraging their offspring to shout and chant slogans of hatred at Jews that young, impressionable minds cannot possibly fathom, but that serve to radicalise future generations into the ISIS of the next generation. Interestingly, Majid Nawaz raised the question on LBC radio: how must we deal with the returning British child soldiers from Syria who have killed and fire bombed? What he failed to discuss was the radicalising taking place right now right here on the streets of London.

The police officers were constantly ushering us back to our side of the street and we complied. They reassured us, first that the chanting hoards would not be allowed to cross the street toward us. Then, when they did, we were promised they would not be able to move closer to us. Then when they stole and burned our flag, the police simply returned it to us, no arrests. Then when they stole a second flag and a young teen stomped all over it, they simply moved him aside, picked up the flag and gave it back to us, still no arrests. Then when they did start encroaching toward us from both sides, in a pincer movement, slowly edging in, causing us to scuffle closer to each other and against the wall, the officers decided to open the security gates into Palace Green, the Embassy road, and scuttle us away for our own safety, escorting some across the park to the tube, us to our car.

As we drove out into Kensington High Street, they were still there, blocking the buses and the cars, several police vehicles stopped in the road. We move on by to return home, checking on each other to ensure everyone was safe. This is London 2017; this is the UK, our democracy abused by a theocratic revisionist Palestinianism that is stealthily replacing our Judeo-Christian ethic as our Prime Minister mouths ‘enough is enough’ whilst granting them the legitimacy of blowing an east wind directly into Westminster Abbey.

About the Author
Sharon Klaff lives in London with her family where she is active in combating replacement ideology and antisemitism. She is a founder member of Campaign4Truth, the grassroots group established in 2009 and affiliated with Eye on Antisemitism monitoring anti-Semitism on social media.
Related Topics
Related Posts
Comments