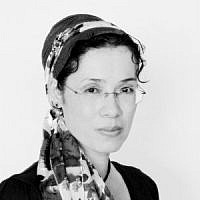 Last night was my first time at shul. I found myself behind a screen, explaining in whispers to my naive young daughters why we had been separated from their father and brothers. There was a good explanation for that, but I still have none for why we are Jews to some and not to others… and why we will always be Jews to those who hate us.

Despite the beauty of the ancient prayers and the festive dancing, a deep melancholy veiled my experience. I saw the trepidation in the men’s eyes when the Rabbi led them onto the street to dance with the Torah. When they demurred, he countered: “Why shouldn’t we? I’m proud to be a Jew.” But pride does not overcome fear, not ours at least. Later, as we left, my husband and sons took off their yarmulkes and the others hid them with hats and caps. Out on the street, the sense of disconnection increased with the distance we walked.

There is a perverse beauty in our fear, though. We are not afraid because we live in a hostile place, because we do not. We are afraid because we belong to Israel. That final word in the Torah, Yisrael, that is what binds us. Even though we are in the throes of a most glorious springtime, we pray as if winter were approaching, because our hearts are in Israel.

As I waited with the women while our husbands and children danced on the street, I did not think of how safe our city is compared to others. I remembered Eitam and Naama Henkin, Aharon and Adele Banita, and the ‘Boycott Israel’ bumper sticker I’d seen near my home just last week. I wondered how Israel, holy to Jews and Christians alike, had become such an object of hatred.

My children do not know that lifeless hatred. They danced in the street without inhibition or fear. They are our reminder of how to live. They embody our love of life that we must not allow to be dimmed. For it is indeed love that conquers fear. It is from love that courage springs forth. Without love and rejoicing, we perish.

About the Author
Mishka Gora is a Tasmanian writer and newfound member of the Diaspora. Trained as an historian but now devoted to the home education of her four children, she is passionate about illuminating the truth, both personal and political, in a world full of lies and propaganda. She is the author of 'Wellspring' and 'Fragments of War'.
Related Topics
Related Posts
Mishka Gora
Comments