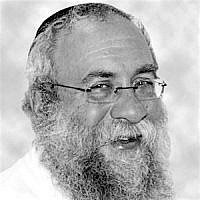 The Blogs
Yisrael Deren
Apply for a Blog
Advertisement
Please note that the posts on The Blogs are contributed by third parties. The opinions, facts and any media content in them are presented solely by the authors, and neither The Times of Israel nor its partners assume any responsibility for them. Please contact us in case of abuse. In case of abuse,
Report this post.

Of all the outsized characters in the Bible, it seems Noah is one of the most underappreciated. He almost singlehandedly rescued humanity and all animal life from destruction – yet he is hardly celebrated. We talk about Noah’s Ark, Noah’s Flood, and even Noah’s rainbow, but we spend so little time on Noah Himself.

We are told he was righteous, a Tzadik, unique in his time; he spent a hundred and twenty years building the ark while simultaneously calling upon humanity to repent. He spent a tough year in the ark protecting all that he saved from the flood, exited the ark, said “thank you, G-d,” then planted a vineyard and got very drunk, and that’s just about the last we hear of him.

I would suggest that the answer is alluded to in his name. The Torah tells us (Gen.5:29) that his father named him Noah because he foresaw “Zeh Yinachameynu” this one will provide us relief or rest. The Midrash describes several forms of relief/rest that Noah provided humanity. He invented the plow, taught how to overcome the “thorns and thistles” that were a staple in agriculture from the day Adam was cursed, and finally created the ark that rested post-flood.

The one interpretation of the word Yinachameynu that we missed is the most common – console! It’s the word tragically too often on our lips as we take leave of a mourner, “Hamakom yinachem etchem” May Hashem console you! Rashi (ibid) says we can’t translate the word “console” because then, grammatically, his name should have been Menachem, not Noah. The Midrash (Yalkut 42:3) tells of a dialogue between Lemach, Noah’s father, and Methuselah about this new baby’s name. One argues for Noah – reliever, the other for Menachem- consoler. The decision: if the people repent and return, it’s Menachem; if not, it stays Noah.

When I have a problem, and someone gives me a solution, a prescription, inspiration, a helping hand, I am grateful for the relief provided, and I now have what I need, and the problem is solved.

But when I suffer a loss, and someone comes to console me, I am grateful for the consolation, but the loss is still a loss, and I still need comfort. I still need a “Menachem,” one who continually consoles.

About the Author
Yisrael Deren serves as Regional Director of Chabad Lubavitch in Connecticut and Senior Rabbi of Chabad of Stamford. Born in Davenport Iowa, raised in Pittsburgh, and educated under the Rebbe's supervision in Brooklyn and Israel, he, together with his wife Aviva, have been Shluchim of the Rebbe for close to 50 years.
Related Topics
Related Posts