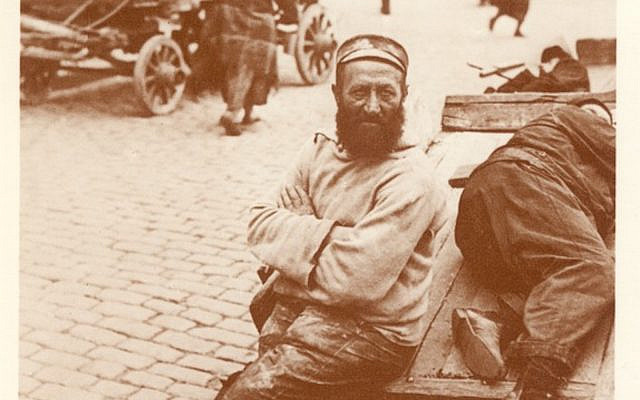 A Jewish man in Warsaw, 1931 (Chr. De Caters / The Israel Museum). From the Joseph and Margit Hoffman Judaica Postcard Collection [997003490760405171]; available via the National Library of Israel Digital Collection

“While Hitler and his clique rule Germany no decent man should have dealings in German goods.”

When Warsaw merchant and chemist Nahum Halberstadt scribbled these words on an envelope and returned to sender in 1933, he never thought they would get him incarcerated. Yet, more than two years after the unopened envelope was sent, a Polish court sentenced Halberstadt to prison time.

His offense? Transgressing a provision of the Polish criminal code that forbade insulting heads of friendly foreign governments.

In Halberstadt’s own words at his trial:

“I had no intention of insulting Hitler. I was annoyed by the insistence and audacity of Germans who offered me German electrical bulbs for sale to Jews in Poland, especially when Jews were so maltreated in Germany. I didn’t even open their letters , as I wasn’t interested in their contents. But, moved by the terrible crimes against Jews in Germany, I wanted to tell the Germans not to pester me with their affairs, so I wrote on an envelope, ‘While Hitler and his clique rule Germany, no decent man should have dealings in German goods.’ What happened after that I didn’t know, until summoned by the police.”

Apparently what had happened was that German postal authorities intercepted the envelope with Halberstadt’s message on it and brought it to the attention of the Foreign Ministry, which in turn raised the issue with the then-friendly Polish regime. 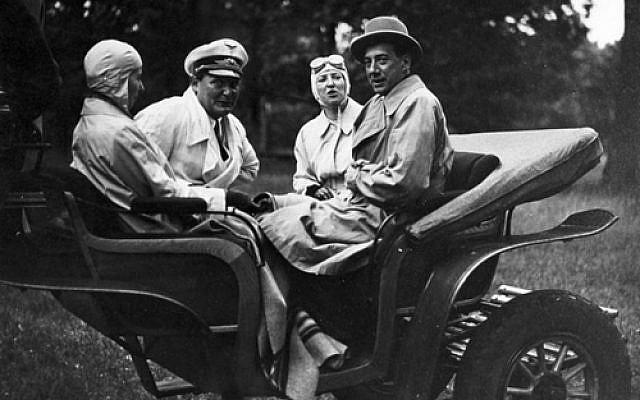 The case in itself, and certainly the verdict, were decried by the local Jewish community. One contemporary news report described the scene as follows:

“Packed with eager spectators, the courtroom was in a turmoil when the verdict was handed down.”

The story in fact traveled well beyond the borders of Poland and Germany.

An editorial in The New York Times entitled “Poland Defends Hitler” emphasized the absurdity and injustice of the affair, lauding Halberstadt’s words as “a manly and natural outburst on the part of a Jew living so close to Naziland.”

An opinion piece in the B’nai Brith Messenger declared:

“This Jewish merchant now occupies a place among the Jewish heroes of our day, and his martyrdom should serve not to discourage, but rather to encourage rebellion against bigotry. For if we yield we merely encourage the proscribing of our human rights to protest against persecution.”

Taking into consideration extenuating circumstances, including Halberstadt’s advanced age, the fact that he had no previous criminal record and was “acting under provocation,” the court meted out a reduced term of eight months in jail, far less than the maximum possible sentence of three years.

Poland itself was no stranger to antisemitism. Calls for boycotts against Jewish businesses and physical attacks on Jews were common throughout the 1920s and 1930s, often perpetrated by student groups and other bigoted factions. This was especially true during the Christmas season, when efforts would be stepped up against Jewish shop owners. 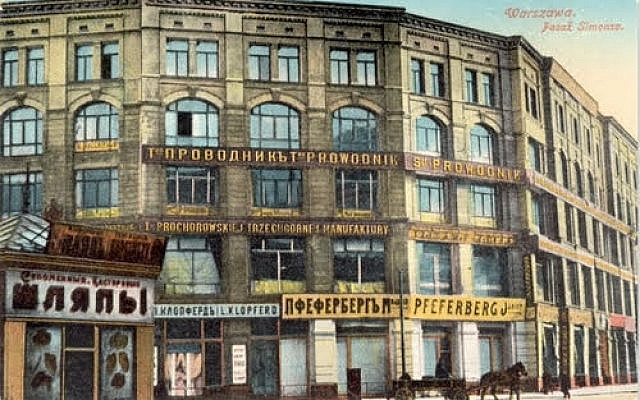 Nonetheless, it was during this period at the end of 1935, that a general Christmas amnesty freed Nahum Halberstadt from jail along with some 30,000 other Polish prisoners, many of them leaders of violently antisemitic Polish nationalist groups. In fact, the very same Christian holiday season in which Halberstadt became free once more saw rabid antisemitic attacks throughout Poland, including massive boycotting of Jewish-owned shops and violent attacks on Jews. 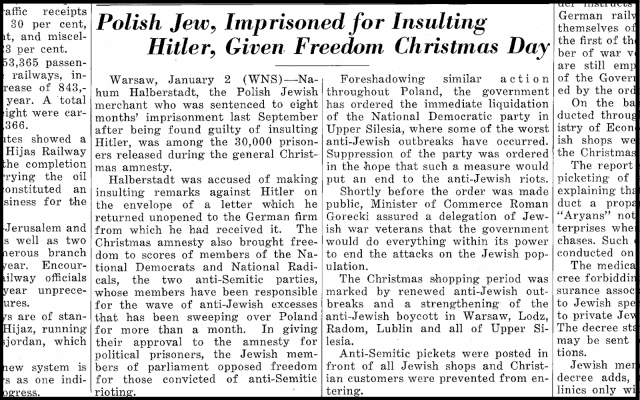 Headline appearing in the January 2, 1936 edition of The Sentinel. From the National Library of Israel Digital Collection

German forces entered Warsaw nearly four years to the day after Nahum Halberstadt was convicted of insulting the head of a friendly foreign government. An estimated five million Polish civilians – at least 3 million of them Jews – were killed between 1939 and 1945.

About the Author
Zack Rothbart is a writer and editor who manages global content and media relations at the National Library of Israel, where he co-edits The Librarians, an online publication dedicated to Jewish, Israeli and Middle Eastern history, heritage and culture. He tries to learn something from everyone and lives in Jerusalem with his endearing and thought-provoking family, for which he is grateful.
Related Topics
Related Posts
Comments